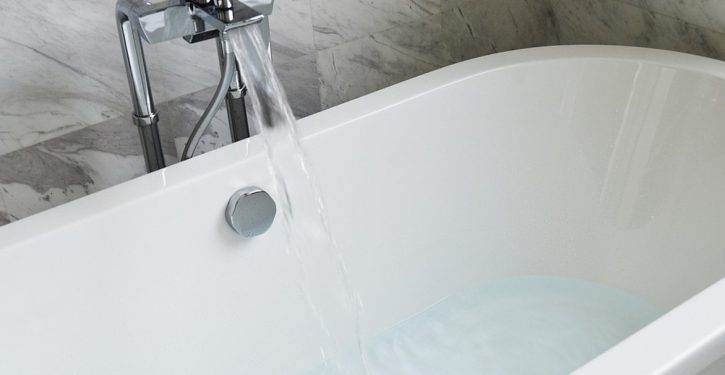 President Trump has taken a lot of misdirected criticism in the last 24 hours over questions he raised during the Thursday White House briefing about ways to kill the COVID-19 coronavirus.  Although Trump didn’t urge anyone to apply disinfectant or bleach to the body as a way of killing the virus, whether by ingestion, injection, or topically, the media have indulged in a frenzy of drive-by claims that he did.

Those media include CNN, the network at which Chris Cuomo has long been a fixture.  Cuomo has recently recovered from a bout with COVID-19, and staged a supposed exit from quarantine-at-home for the cameras this week.  (The New York Post points out that by his own report, Cuomo departed quarantine for at least one expedition days before.)

Some of Cuomo’s family members, including his wife Cristina, contracted the coronavirus as well.  At the New York Post’s Page Six, Emily Smith has updated the public on Cristina Cuomo’s self-care advice for combating COVID-19.  Smith refers to it as “a list of preposterous privileged preparations,” but you can decide for yourselves.

One of the remedies, which Ms. Cuomo resorted to when her sinus congestion flared up during the virus, was bleach in her bath water.  Smith quotes from Cristina’s blog post:

“When my sinus congestion was painful, I enlisted Dr. Roxanna Namavar from Pretty Healthy NYC, who also does vitamin drips at home in the Hamptons,” she wrote. “She shows up in her full hazmat outfit and 3M mask. I got magnesium, NAC (a precursor to glutathione, said to be very helpful against COVID-19), vitamin C with lysine, proline, and B complex, folic acid, zinc, selenium, glutathione and caffeine (to combat the headache).”

In what reads like a piece from The Onion, Cristina adds, “Both days, I added ½ cup of Clorox to my bathwater to combat the radiation and metals in my system and oxygenate it.”

Smith goes on to note that “Adding a small amount of non-concentrated bleach to a bath is said by some to rid the skin of bacteria. However, doctors say the smell of bleach can trigger asthma and other breathing problems, and it is not recommended for skin with open cuts.”

There’s quite a bit more from Cristina Cuomo’s store of at-home remedies for wealthy clients who can afford visits from exotic specialists.  Some people, for instance, may want to rent “a PEMF (pulsed electromagnetic field) machine, which optimizes the ability of cells to start healing. It uses low-energy fields to stimulate the self-healing mechanisms of the cells after a physical injury or a viral attack on the body’s tissues or bones.”

Others may prefer “an Ayurveda lunch from chef Corey de Rosa at Tapovana in Bridgehampton [whose] menu treats food as medicine.”

Cristina’s own family menus, as Smith recounts, include “’Pongal, made of mung beans and rice,’ ‘rose lassi, a yogurt-based drink packed with natural probiotics,’ and ‘mashed mung daal.’”

There’s a lot more, and no need to belabor the eager diversity of the regimen pursued chez Cuomo.

Given the juxtaposition here, it may be fair to ask if maybe Trump should avoid seeming to range himself with assisted-home-remedy enthusiasts in public discussions of COVID-19 policy.  We can say, in fairness to his critics, that he didn’t take proactive steps to distance himself from that appearance.

But he also clearly wasn’t talking about what Cristina Cuomo outlines, which some people (OK, a lot of people) would refer to as “quacking yourself.”  Consider this passage from Thursday’s White House brief, described at the CNN link above:

A pained-looked Dr. Deborah Birx listened carefully as Trump mused about “cleaning” bodies with disinfectant. When Trump asked her about using “heat and light” as a treatment, she demurred.

“Not as a treatment,” Birx, the White House coronavirus response coordinator and public health expert, replied. “I mean, certainly fever is a good thing. When you have a fever, it helps your body respond. But not as — I’ve not seen heat or … ”

Trump cut her off — “I think it’s a great thing to look at” — before moving on.

In the brief exchange, especially in light of what came before it, you can hear what Trump actually said — and meant — or you can hear with the ears of custom and “expertise.”  Without doubting Dr. Birx’s expertise, it’s clear that adding custom to it — the customary way in which we interpret certain verbal signals — prevented her from speaking in the terms Trump had in mind.  That prevented her in turn from responding effectively, as opposed to reflexively.

Trump obviously didn’t mean people should immediately run out and have themselves irradiated with heat and light.  His entire riff on this topic during the brief was about professionals experimenting safely with potential treatments using things we know kill the virus, including heat, light, and disinfectants like bleach.  Such applications have not been refined for use on the human body, but perhaps they could be.  And since the quantities in question work well at killing the virus directly, there’s a rational purpose for trying to develop them.

Is that inherently impossible or ridiculous?  Of course not.  We’d have to prove it’s impossible, at least at a given state of the art.  We don’t know that now.  Trump’s final words (“I think it’s a great thing to look at”) clarify that that’s what he had in mind in pursuing the topic.

Frankly, I had no trouble hearing that when I listened to the briefing live on Thursday.  I do understand that other people might, and I understand the perspective that says Trump should edit himself and not bring up things it’s easy to interpret the wrong way.

But I would disagree that such a relatively narrow-minded framework for common understanding has to rule over us, bludgeoning all syllables that threaten to go rogue.  Proposing things that sound weird to some people is how the human race makes big advances.  Fearing to even mention them is how we are held back.

It’s not as though we couldn’t use some out-of-the-box thinking.  We’re doing very poorly at balancing public policy right now, shutting down the economy in catastrophic fashion to — theoretically — limit the spread of a virus that we’ve seen no evidence will kill vast numbers of people.  (It is viciously disingenuous to suggest that speaking that truth is being callous about the people who are more prone to die.  Shame on everyone who utters that cheap, insinuating sentiment.)

No one can say with certainty that prohibiting most social and economic activity was the most effective thing to do.  It was, rather, the most linear, defensive, lowest-common-denominator thing to do.  It was simplistic, and suited to the tools of government, which are about force and arbitrary incentives.

Meanwhile, study after study is now showing that far more people than thought are infected with COVID-19, which would actually mean at this point that the mortality rate from it is much lower than the original projections.  (See here, here, here, and here, for example.)  Most importantly, the incidence of mortality is definitively greatest for a clearly-bounded population: the old, and those with certain preexisting risk factors such as heart disease.  That means we can protect those people, as we all urgently want to, without shutting everyone on the planet indoors for 12 to 18 months (or forever, for that matter).

We had to learn all this by doing.  There’s no point in laying blame for policy decisions that people were doing their best to support and make.  The experts have changed their predictions and assessments over time.  Trump, whatever else he may have mused about, has actually adhered closely to the advice of the experts on his team.  The governors have pretty much done so as well, with a few excursions here and there beyond what experts were presuming to advise.  There’s no reason to think they will stop doing that.

But yet here we are.  It’s not OK for what has happened with COVID-19 to be the “new normal” for the human race.  Viruses and the threat of viruses cannot rule over us, setting unforeseen boundaries for all our aspirations and ingenuity and train-wrecking our entire civilization — with our conscious cooperation! — on a whim.  If the way we handle viruses leaves them in a position to do that, then we need to change the way we handle viruses.

The expertise we have, while admirable, isn’t good enough.  That expertise had no answer for us other than “go indoors, suspend indefinitely all your cooperative expectations such as rent, mortgages, and a complex economy, and oh by the way, run out of beef, legumes, and toilet paper.”  This is actually more self-destructive than what we’ve done in our theoretically more-benighted past, when we “knew” far less than we do now.  Our ability to talk in scientific gibberish about the most minute components of viruses and the reactions of the human body didn’t give us any better answer than to lob a neutron bomb into our cooperative, civilizational self: the self that’s about feeding and housing everyone, by divvying up the work.

And that’s the wrong answer.

As we move forward, then, I’m not just willing to tolerate Trump’s unusual communication style; I’m glad he has it.  It sends signals we need.  In this case, it has signaled that Trump doesn’t see the universe of “virus response options” as a closed set, whose definitive features we already know and cannot deviate from.

We need that reassurance.  It is narrow-minded to assume our options against viruses must always entail a central power of some kind being able to track us and arrest our movements, as if we are a mechanism.  That’s an old century talking.  Indeed, there’s a powerful case to be made that it’s not just a narrow-minded assumption, it’s an immoral one.  Our society now lives by premises that keep us from seeing that — and that is a huge problem; one of our biggest.  I’m glad we have a president who, by disposition and unique habits of mind, is not enslaved to that way of thinking.  We need such fresh intelligence, and badly.