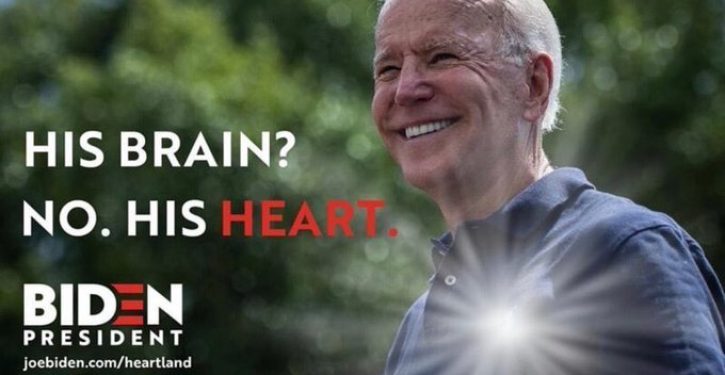 *UPDATE*: What appeared to absurd to be too good to be true apparently is. This morning I clicked on the link embedded in the ad, joebiden.com/heartland, and it leads to the following 404 page:

Frankly, the 404 page is pretty ridiculous in its own right, with tech guru Biden assuring visitors that he’ll “get us back on the rails,” but I am here not to criticize but to take my lumps. I apologize to readers for pulling the trigger on this story before fully vetting it. Perhaps I should have heeded the people on social media who doubted the ad’s veracity.

Mea maxima culpa. I will resolve to do better.

Judging from a print ad just released by Team Biden, it appears that that company, Hawkfish, may have signed on. The ad, which is as telegraphic in its brevity as it is cryptic, shows a smiling former vice president on one side, an eight-word caption on the other. The tag line reads “His brain? No. His heart.”

The ad is clearly intended to address the growing concern over Biden’s frequent verbal stumbles and memory lapses and the questions arising from those regarding his mental health. (RELATED: Questions about Joe Biden’s mental fitness creep into the mainstream)

The problems with the ad are abundant. The first part of the slogan appears to be asking you to doubt your lying eyes and ears, which tell you that the 77-year-old may be suffering from dementia. But in that context, the second part of the ad — “No. His heart.” — seems to be suggesting that the problem isn’t with Biden’s failing mind but with his ticker. In point of fact, Biden was treated in 2019 for atrial fibrillation, or an irregular heartbeat, which can lead to blood clots, stroke, heart failure and other heart-related complications.

Even if we accept the second part of the message on a more figurative level — that Biden is a caring or “good-hearted” person — how do we interpret the first part? That he isn’t much of a thinker? Not exactly a ringing endorsement for a prospective leader of the free world.

People at reddit are having a field day with the ad. One commenter wrote, “apparently his marketing team has dementia too.” Another quipped, “What? His heart is a supernova?”

If there is one over-arching sensibility across social media it is one of disbelief. People refuse to see the ad as real.

Not a good place to be if you’re running for president. 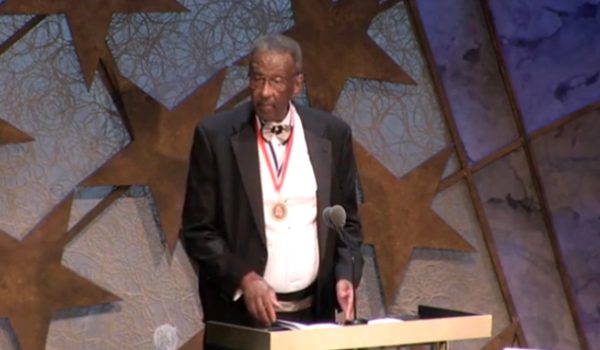