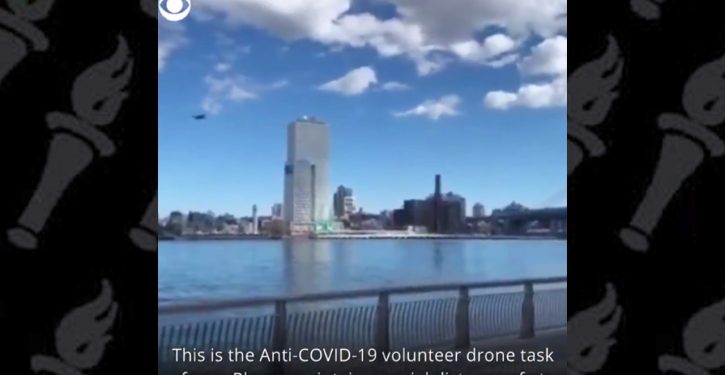 It needed only this.  An MSNBC report clipped and posted by Elizabeth Harrington showcases the drone-enforced social-distancing effort being mounted by the city of Elizabeth, New Jersey.

"The drones, donated by DJI, a Chinese company, have gone to 43 agencies in 22 states, all to help enforce social distancing rules."

Oh, and DJI "may be sending data to China" pic.twitter.com/LqH6VzonzH

The drones’ purpose, according to Mayor Chris Bollwage, is to remind “residents who are caught breaking social distancing rules of the penalties they could suffer if they do not cease immediately.”

On 7 April, the Elizabeth Police Department posted this warning on Facebook:

We have been using Unmanned Aerial Vehicles (Drones) since 2018, however, the new models are equipped with voice capabilities. We were able to secure 5 DJI Mavic 2 UAV, on loan through DJI’s Public Safety Disaster Relief Program – thank you to Wayne Baker, the DJI Director of Public Safety Integration.

These drones will be around the City with an automated message from the Mayor telling you to STOP gathering, disperse and go home.

Reporting from various sites on 17 April has referred to the drones as “donated” by DJI, or Da Jiang Innovations, a Chinese electronics company that reportedly has 70% of the world market for certain classes of drones – like the popular Mavic 2 model shown in the video.

And if the drones are on loan, it’s a really good bet they’re being operated by DJI representatives for the 43 jurisdictions in 22 states that have reportedly received them.

Even during a pandemic, having a drone issue orders to law-abiding citizens is creepy. pic.twitter.com/2HQgtElESj

The problem, aside from the creep factor, is that DJI has been under suspicion of espionage via its drone fleet for years.

Regarding comments on drones, we are trying to save lives, not be big brother. If this plan saves 1 life, then its worth it. All its doing is spreading an automated notice about social distance. No recording or pictures are taken, just a tool of encouragement to follow the rules. pic.twitter.com/KnptwsxBQ2

But it’s legitimate to ask how they’re so sure of that.

U.S. federal agencies have reported DJI drones as a significant security risk for some time.  In May 2019, Homeland Security made headlines with an alert suggesting that the drones were sending data to DJI.

Chinese-made drones may be sending sensitive flight data to their manufacturers in China, where it can be accessed by the government there, the US Department of Homeland Security warned in an alert issued Monday obtained by CNN.

The drones are a “potential risk to an organization’s information,” the alert from DHS’s Cybersecurity and Infrastructure Security Agency states. The products “contain components that can compromise your data and share your information on a server accessed beyond the company itself.”

CNN observed in the same report that the Army banned use of the DJI drones back in 2017.  The Navy, in fact, expressed concerns about security risks with the DJI drones in a letter from May 2017.  As noted by the National Security Archive website, the Navy communication included this sobering assessment:

The memo drew attention to public research which suggested that the data link from the drone to the ground station was vulnerable and that the system could upload images, videos, or telemetry to servers without operator knowledge. It also expressed uncertainty over vulnerability to electromagnetic interference resulting in loss of control.

Since 2015, DJI has targeted a number of U.S. companies in the critical infrastructure and law enforcement sectors to market its UAS. As of July 2017, at least ten large companies and organizations operating in the railroad, utility, media, farming, education, and federal law enforcement sectors have already purchased and begun using DJI UAS. The most frequent uses include mapping land, inspecting infrastructure, conducting surveillance, and monitoring hazardous materials.

As well as this:

The ICE bulletin went on to cite commentary about DJI-collected data being handed over to the Chinese government, and to report that “Since 2015, DJI has specifically targeted Sheriff’s Departments and Search and Rescue teams that attended [drone industry] shows.”

China may or may not care about video of Americans walking around Elizabeth, NJ, but “proprietary and sensitive critical infrastructure data” on the local IT and power arrangements would certainly be of interest.  So, obviously, would be the infrastructure and operations of the Elizabeth Police Department.

But there’s more.  After the DHS alert in May 2019, the U.S. Department of the Interior grounded its entire fleet of some 800 drones in October 2019.  All of them were either manufactured in China or had components made in China.

And in January 2020, Interior was preparing to implement a no-fly policy for drones that are not made domestically, because of the security risks identified.  Documents on the new policy didn’t name China specifically, but all of Interior’s non-domestically-made drones were manufactured in whole or in part by China.  (The new policy was to include a waiver contingency for emergencies, such as tracking wildfires and aiding rescues.)

The Trump administration has been clamping down on the purchase and use of Chinese-made drones by federal agencies. So China is taking advantage of the coronavirus crisis to “donate” drones of the same kind to local agencies in nearly half of the American states – on loan, which increases the likelihood that DJI personnel are involved in operating the drones.

There’s enough information out there, courtesy of the federal agencies, to make it clear that the police and sheriff departments benefiting from this windfall are probably being spied on relentlessly without knowing it.  Their cities and counties are too. 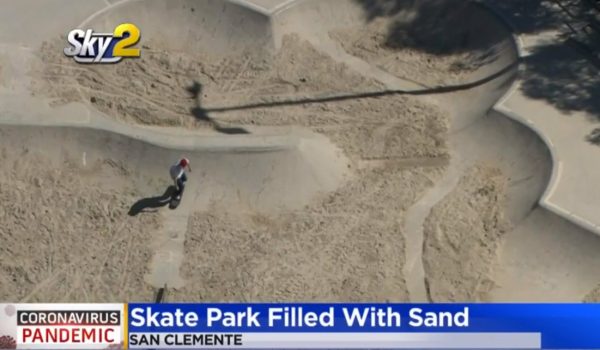