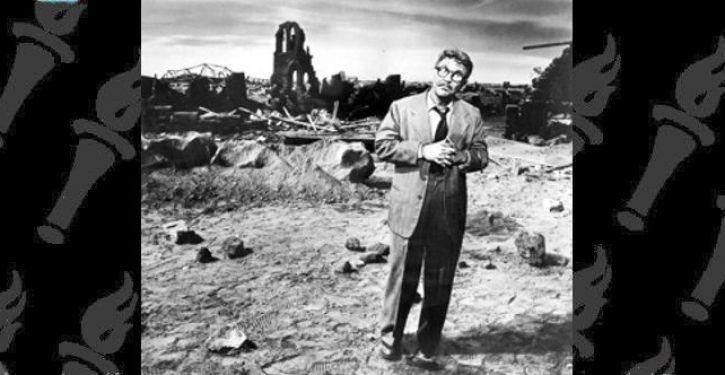 End of the world as depicted on 'The Twilight Zone' (Image: Wikipedia)

Note: The views expressed herein are solely those of the author and do not necessarily reflect the opinions of the editors.

In this dystopian mask-wearing spring of collective isolation, panic, loss, heartbreak, and suffering, my theme song is “It’s the End of the World as We Know It.”

The catchy chorus of R.E.M’s 1987 hit captures my view of the alarming tectonic plate-shifting trends obliterating any “back to normal” life for the foreseeable future. Am I overreacting? If so, I am not alone.

Is a “V-shaped recovery” only months away? Doubters reside in high offices — and in a very high Washington, D.C. office, where the latest Federal Reserve report offers no political or economic sugar coating.

It will take a miracle if we are all whistling, “Happy Days Are Here Again,” by July 4.

For starters, pre-virus foundational economic problems plaguing our nation are severely exacerbated by the crisis. Even when the economy was humming along, America had morphed into a nation of “haves vs. have-nots” with a shrinking middle class and stagnant wages. Those issues were going to be key Democratic Party talking points before the coronavirus war.

You may recall this widely reported headline statistic from May 24, 2019, “40% of Americans don’t have $400 in the bank for emergency expenses: Federal Reserve”.

That bleak finding was from the then newly-released May 2019 Federal Reserve Board of Governors annual “Report of the Economic Well-Being of U.S. Households in 2018”. And remember that the 2018 monthly unemployment rate average was 3.8%.

Layer that “strong economy” $400 cash-crunch over Thursday’s Washington Post gut-punch reality check headline: “U.S. now has 22 million unemployed as economy sinks toward Depression-like scenario.” And continues with this stunner: “The U.S. unemployment rate is already over 20 percent, according to two professors who are tracking the data in real time.”

Record-breaking job losses coupled with the chronic insecure cash position experienced by 40% of Americans, explains the sudden, endless lines of cars waiting for food in Florida, Texas, and California. Expect more devastating scenes of despair to follow in the “new” America.

“Exhibit A” – New Age of Insecurity

Great Depression levels of unemployment leading to food insecurity for millions of Americans compounded by some disruption in the food supply chain for everyone beginning with the closing of processing plants and truckers facing growing obstacles.

Inevitably all the people waiting for food in their cars will get their jobs back as soon as “the economy opens back up,” right?

That is optimistic thinking. Yet realistically, how does this happen when a disproportionate number of workers in our low-wage service economy and the owners that employ them are dependent on streams of regular customers walking back through their doors? Sadly, the scourge of this virus is insecurity. One does not know if the virus will strike you, a loved one, or if we are carriers without symptoms. By now, everyone knows someone who has suffered through the virus or tragically died.

Thus, the overarching question is how long before Americans without masks will feel comfortable sitting next to strangers at a restaurant, bar, concert, stadium, theater, or political rally? How about attending a class, large conference, a house of worship, getting on a plane, taking public transportation, or joining a mass gathering of any kind.

Hands-on service economy workers will regain full employment only when that cloud of insecurity subsides — not when the president or a governor gives an order. And of course, mass momentum will be created when all schools and colleges are open for in-person learning. “When” is the operative word. But for now, an applicable quote from a famous Buffalo Springfield song, “Paranoia strikes deep, into your life it will creep.”

“Exhibit B” – Bailing out the entire economy?

Meanwhile, a “second round” of layoffs is impacting white-collar professionals with a “few are safe” headline warning. High-wage job losses could accelerate a “spiraling down” with an endless bottom. Here is what I call “Exhibit B” — recent headlines that together are cataclysmic:

CNBC: “Hotels and retailers not paying rent due to the coronavirus pandemic spikes in April.”

TechCrunch: “Commercial real estate could be in trouble, even after COVID-19 is over.”

The grand scale of this potential default chain, possibility wider and deeper than the Great Recession, spawned a recent AP headline: “Banks brace for big loan defaults by US, global customers.”

Note that in October 2009, at the height of the Great Recession, the unemployment rate was 10.2%. But if May’s official unemployment rate exceeds that, missed real estate payments will be higher than in April — possibly triggering an economic tsunami crash wave beyond anyone’s imagination. God forbid.

Do the math and reach for a life jacket as I quote another classic pop title, “We Have Only Just Begun,” as I continue singing “It’s The End of the World As We Know It.”

In defense of my song choices, I present “Exhibit C” — another chilling Washington Post headline: “The U.S. has thrown more than $6 trillion at the coronavirus crisis. That number could grow.”

It is difficult to wrap your head around such astronomical levels of government spending. Moreover, the Post reports that the over $6 trillion puts “the country on track to eclipse World War II-era highs in the national debt and the Federal Reserve’s balance sheet.” Read that sentence twice to be sure you read it correctly.

And since we are spending more to defeat a microscopic parasite than we spent defeating Hitler, we can take comfort in knowing that the employees who print the money at the U.S. Bureau of Engraving & Printing in Washington, D.C., will not lose their jobs.