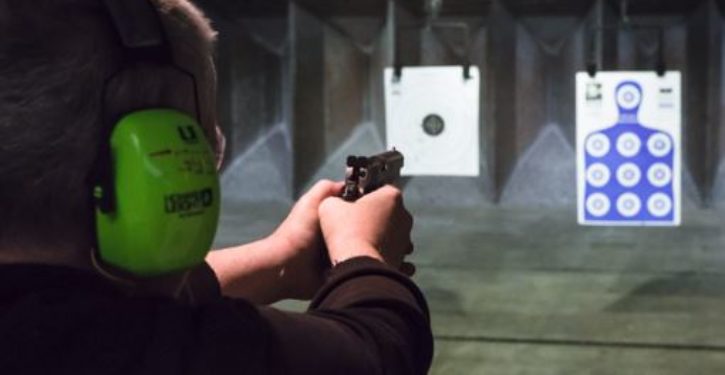 In a great post at RedState, Kira Davis provides information from the owner of a gun range and retail gun outlet in Southern California, which like the rest of the nation has seen a tremendous surge in purchases of guns and ammunition during the coronavirus pandemic.

Davis got the detailed account because Gregg Bouslog, who runs the On-Target Indoor Shooting Range in Laguna Niguel, is the father of a friend.  On-Target is also the range where Davis has taken her own children to learn to shoot.

At the outset, Davis refers to the angry and irritated first-time customers as “liberals.”  Apparently Bouslog and Davis’s friend think they’re liberals.

“How,” Davis asks, “does he know they’re liberals?  ‘They’re shocked to discover they can’t just walk out of the store with a gun.’”

There’s something to that, but it’s also the case that a lot of people in coastal California may not think of themselves as liberals, per se, but that they also know absolutely nothing about guns.  Laguna Niguel in Orange County would be just the place for that.

So I’ll think of the outraged buyers as novices, for the purposes of this article.  Many of them may well vote Republican, and not object to guns on principle, but will have a vague idea that “tighter gun laws,” whose particulars they couldn’t tell you if you waterboarded them, are just common sense.

It turns out those gun laws have teeth.  And the teeth bite down just when you think you might really need a gun – well, and some ammo too would be nice – and discover that you can’t just walk out with either gun or ammo after submitting what seems like a very extensive application at the gun store.

“[T]he most amusing and annoying part for the staff,” writes Davis, “has been watching these first-time buyers discover just how stringent gun laws in California really are, including one of our newest laws requiring background checks before buying ammunition. Bouslog says it’s a bridge too far for the people who have been told their whole lives that it’s easier to get a gun than an abortion.”

The majority of these first timers lost their minds when we went through the Ammo Law requirements. Most used language not normally heard, even in a gun range. We pointed out that since no one working here voted for these laws, then maybe they might know someone who did. …

Most were VERY vocal about why it takes 10 days minimum (sometimes longer if the DOJ is backed up) to take their property home with them. They ask why do I need to wait 10 days if I need the protection today or tomorrow …

They really went crazy when we told them that for each firearm they had to do the same amount of paperwork and they could only purchase ONE handgun every 30 days. …

We had people cuss at us and stomp out when we explained that secondary identification had to be part of the paperwork, as they felt insulted that what they had wasn’t good enough. …

One would be tempted to point out virtuously to the irascible novices that, for all the state of California knows, they’re about to go on a mass shooting rampage. (One could go for the virtue three-pointer and suggest that what California really needs is a law requiring a special mental health evaluation whenever anyone wants to buy a firearm or ammunition.  Adding the “ammunition” would expand on a proposed bill in the New York State Senate.)

Anyone who wants a gun might have such a vision in mind, after all.  Or might simply be an incompetent fool (as some of the aspiring gun owners apparently have been, to the alarm of On-Target salespeople who keep finding gun barrels recklessly pointed at them across the sales counter).

Davis puts it this way: “[M]ost people who believe they are anti-gun … don’t realize they’re projecting their own stupidity onto law-abiding gun owners. They imagine that we gun owners are just a bunch of yahoos out here combing our mullets, waving our guns around to look sexy while we look for anything or anyone to shoot at any time.”

By extension, then, the anti-gun assume that, if worst came to worst and they felt the urgent need to arm themselves, surely the tight “common sense” controls necessary to deter yokels wouldn’t apply to them.

Kira Davis confesses she used to be a gun novice herself, one who came from a background of despising guns and the Second Amendment.  She says she has learned a lot in the process of familiarizing herself with guns.

She ends with a hopeful question: “As these revelations begin to spread among our liberal brethren in the state of California, will we see a shift in gun laws and support for anti-Second Amendment legislators?”

As she concludes, time will tell.  Many people’s minds do seem impervious to the reality that it isn’t possible to keep guns out of the hands of criminals and psychopaths, short of keeping the potential shooters institutionalized and under strict control.  But the developments around us in 2020 have been so singular and astounding that it’s possible even deeply ingrained habits of mind will be altered enough to make the difference Davis suggests.