The FBI received evidence that Russian disinformation polluted the infamous Steele dossier, according to information declassified Friday from the Justice Department inspector general’s report of the FBI’s surveillance of the Trump campaign.

FBI officials also had concerns as far back as 2015 of dossier author Christopher Steele’s relationship to Russian oligarchs, but those were never shared with the FBI team that led the Trump investigation.

Despite those red flags, the FBI continued relying on Steele’s information in applications to obtain surveillance warrants against Carter Page, the former Trump campaign aide.

The bombshell disclosures were made Friday in response to repeated requests from Sens. Chuck Grassley and Ron Johnson to disclose four redacted footnotes in the IG report.

“It’s ironic that the Russian collusion narrative was fatally flawed because of Russian disinformation,” the two Republicans said in a statement. “These footnotes confirm that there was a direct Russian disinformation campaign in 2016, and there were ties between Russian intelligence and a presidential campaign – the Clinton campaign, not Trump’s.” (RELATED: Mystery Footnotes From FISA Report Set For Declassification)

The senators said they expect a “fuller declassification” of the footnotes over the next few days. CBS News published portions of the unredacted footnotes Friday afternoon.

Steele, a former MI6 officer, was hired in 2016 by the Clinton campaign and DNC to investigate Donald Trump’s possible ties to Russia. He shared the information with the FBI, which used it to obtain wiretap authorization against Page.

The FBI received assessments in 2017 that Russia’s intelligence service, RIS, pushed disinformation to Steele regarding former Trump lawyer Michael Cohen and a 2013 trip that Trump made to Moscow, according to one footnote.

Cohen visited Prague in August 2016 to meet with Kremlin insiders to pay off Russian hackers, Steele said in the dossier.

The Russian government was blackmailing Trump with video footage of him with prostitutes in Moscow in 2013, Steele also noted. (RELATED: Investigate The Dossier As Russian Disinformation, Intel Experts Say)

An unknown entity — its identity is still redacted — assessed that “it did not have high confidence in this subset of Steele’s reporting and assessed that the referenced subset was part of a Russian disinformation campaign to denigrate U.S. foreign relations,” the footnote stated.

The footnote refers to a piece of information given to the FBI in 2017 “outlining an inaccuracy in a limited subset of Steele’s reporting about the activities of Michael Cohen.”

One footnote refers to information that a Russian operative had infiltrated Steele’s network of informants.

“An individual with reported connections to Trump and Russia who claimed that the public reporting about the details of Trump’s [redacted] activities in Moscow during a trip in 2013 are false, and that they were the product of RIS ‘infiltrating a source into the network’ of a [redacted] who compiled a dossier of information on Trump’s activities,” one footnote reads.

One FBI unit had concerns about Steele’s contacts with Russian oligarchs, but those did not make their way to the FBI Crossfire Hurricane team.

The footnotes indicated that the FBI’s Crossfire Hurricane team, which led the Trump probe, received information about the potential Russian disinformation campaign.

Investigators received information in early October 2016 that a purported sub-source for the dossier was “rumored” to be a Russian intelligence agent, according to another footnote.

“According to a document circulated among Crossfire Hurricane team members and supervisors in early October 2016, Person 1 had historical contact with persons and entities suspected of being linked to RIS. The document described reporting [redacted] that Person 1 ‘was rumored to be a former KGB/SVR officer.’”

FBI investigators told the IG they would have wanted to know earlier about the information regarding Steele, the footnotes stated.

An FBI intelligence analyst and supervisory agent told the IG that they did not recall reviewing Steele’s internal FBI source filings which document “frequent contacts with representatives for multiple Russian oligarchs in 2015.”

The Crossfire Hurricane team did not review Steele’s source file until Nov. 18, 2016, nearly a month after the FBI obtained its first surveillance warrant against Steele.

“For years, the public was fed a healthy diet of leaks, innuendo and false information to imply that President Trump and his campaign were part of a Russian conspiracy to spread disinformation,” said Grassley and Johnson. “The FBI’s blind pursuit of the investigation, despite exculpatory and contradictory information, only legitimized the narrative.”

Lawmakers and other government officials have speculated for years that Russian disinformation was fed to Steele. That theory has gained traction in the three years since BuzzFeed News published Steele’s report.

Fiona Hill, who served as a top Russia expert in the Trump White House, testified on Oct. 14, 2019, at the Trump impeachment hearings that she believed that Steele published Russian disinformation.

Steele relied on a primary source who collected information from a network of sub-sources in Russia and the West. He produced 17 memos as part of the investigation, and met multiple times with the FBI as part of its investigation into a possible conspiracy between the Trump campaign and Russia.

Steele’s primary source also told FBI agents in January 2017 that Steele mischaracterized information that ended up in the dossier.

Novice gun-buyers highly incensed to discover California’s restrictive laws apply to them
Next Post
Cartoon of the Day: Name that Tune 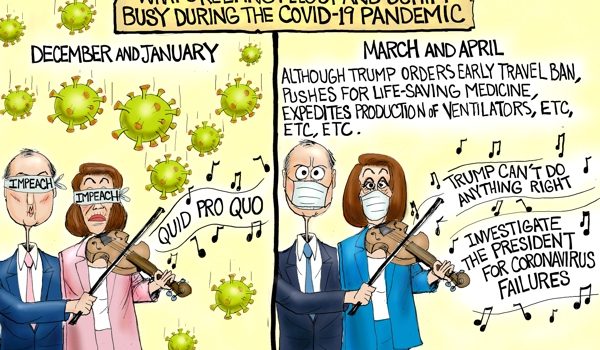