There’s a reason “The View” co-host Whoopi Goldberg makes the big bucks. According to the racist-sounding website Wealthy Gorilla, the actor and entertainer’s net worth is roughly $45 million. In addition, she is reportedly paid between $5 and $6 million annually for appearing on the ABC chatfest.

The reason for all that wealth is the brilliant political observations she shares with fans of the show. She recently suggested, for example, that Jill Biden, wife of presumptive Democratic nominee Joe Biden, should be named Surgeon General in the event the former vice president wins the presidency in November.

Goldberg went on to pronounce Mrs. Biden a “hell of a doctor — she’s an amazing doctor.” Goldberg never explains the basis of that assessment, though her endorsement was nevertheless met with a polite smacking of hands among members of the studio audience. Watch:

Whoopi Goldberg saying that Jill Biden should be Surgeon General and that she’s an “Amazing Doctor.” Jill Biden has a PhD in education. pic.twitter.com/UQtTpFpslg

So what’s wrong with this picture? The main problem is that the former veep’s wife is not a medical doctor. The degree she holds is an EdD, or Doctor of Education, which to an M.D. is what pig Latin is to Latin.

The requirements for an EdD are far less stringent than a PhD. Many EdD programs, for example, do not require the writing of a dissertation. The post of Surgeon General, in contrast, requires at that the candidate be a licensed physician.

To her credit, Mrs. Biden no longer expects to be introduced as “Dr. Biden,” though to her discredit she once foolishly did.

Ultimately, Goldberg’s cohorts go on to clarify that Jill Biden is not a physician but a teacher.

‘Americans should be tested for COVID-19 daily and forced to wear badge showing result’
Next Post
Cartoon of the Day: Bedside manners 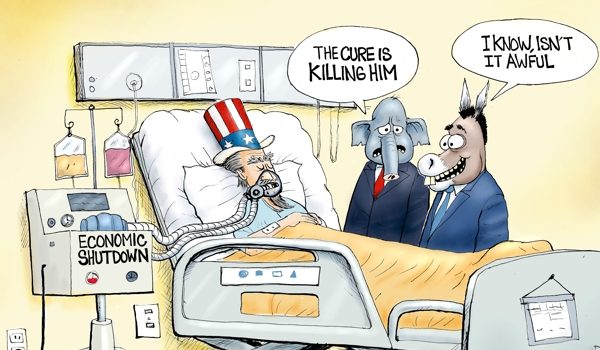