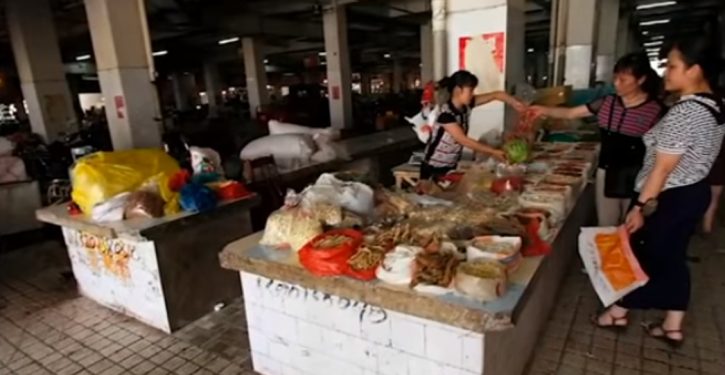 Vendors at Wuhan, China’s so-called wet markets sell everything from peacocks to kangaroos, and even an occasional camel or cat, according to reports in February.

Experts say these wet markets are where coronavirus, or COVID-19, originated in early December 2019 before hitting the United States, where it has killed nearly 3,000 people. Clerks in the market list crocodiles, wolf pups and cats as menu items, the South China Morning Post reported in February.

New York Times investigative reporter Muyi Xiao posted in a Jan. 20 tweet what he said was a copy of the menu. (RELATED: Chinese Markets Reopen — And They Still Sell Bats, Dogs And Cats)

Xiao included in his tweet a screenshot of the menu and a photo of the store front where the menu was being passed around.

Photo from Douban of a menu at #Wuhan Huanan Seafood Market. Don't know when it was taken, but they sell all kinds of wild animals incl. live wolf pups & palm civets. 2nd photo taken after outbreak discovered shows this storefront (3rd left) covering word “野 (wild)” in its name. pic.twitter.com/HiQlzX4XBX

Here are some of the animals included on the picture Xiao posted:

“I visited the Tai Po wet market in Hong Kong, and it’s quite obvious why the term ‘wet’ is used,” he wrote at the time.

“Live fish in open tubs splash water all over the floor. The countertops of the stalls are red with blood as fish are gutted and filleted right in front of the customers’ eyes,” Beaubien noted.

He added: “Melting ice adds to the slush on the floor. There’s lots of water, blood, fish scales and chicken guts. Things are wet.”

Scientists say the virus made its appearance through a process that ends in a the creation of a zoonotic disease, a virus that leaps from animals to people.

Here’s the process, according to researchers.

Wild and exotic animals are mixed with domesticated species in an environment that weakens the animals’ immune systems, leading to a mix of genetic code that can spread from one species to another, according to biologist Kevin Olival, vice president for research at the EcoHealth Alliance.

“This is where you get new and emerging diseases that the human population has never seen before,” Olival told The New York Times in a Jan. 25 report on Wuhan’s markets.

Trump DHS clarifies: Gun retailers and manufacturers are ‘essential’
Next Post
N.J. man charged after throwing party with 47 people in his 550-square-foot apartment