“Economist” Alexandria Ocasio-Cortez appeared on CNN’s “State of the Union” last Sunday, where host Jake Tapper asked her about the various stimulus proposals currently being debated by Congress. One of these proposals was advanced by her “Squad’ mate, Rashida Tlaib, who advocates sending $2,000 to every person in America and another $1,000 monthly until 12 months after the crisis passes.

The big question on the minds of socialists like Ocasio-Cortez is whether the government should extend its largesse to “rich” people, an idea that’s generally anathema. Her answer, surprisingly, was a qualified yes, which at first blush would suggest she’s finally learning something about economics. But then she quickly dispelled that illusion by detailing her qualification.

It comes at roughly 2:35 in the video that follows. The transcript follows.

I do think it should be universal. I hear the argument of people saying, why are you going to give a check to Bill Gates. One of the things that we’re saying is, tax it back a year from now so we don’t have to worry about a big complicated bureaucratic means test up front, mail them out to everybody and let’s get it back from the folks that don’t need it next year.

Pure genius. Millionaires and billionaires will never notice that the money the federal government has passed along to them with hand is being removed from their pockets by the other.

Notice by the way that she borrows the terminology of another brilliant economic mind, that of Barack Obama, who spoke of money rich people “don’t need.” Who determines that need? Why, people in government like Ocasio-Cortez. 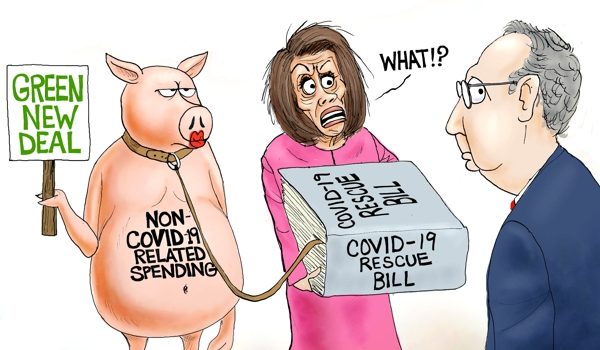 Cartoon of the Day: This little piggy
Next Post
Biden Follies: coronavirus edition