Senate Majority Leader Mitch McConnell was indignant in a floor speech on Sunday when Nancy Pelosi and the senior House Democrats returned to Capitol Hill from a week-long break and announced they would be writing their own, new version of a relief bill for the effects of the COVID-19 coronavirus on Americans.

This is a national emergency. Not a partisan opportunity.

McConnell’s wrath was justified, and not just because the House Democrats’ move postponed a vote the Senate was otherwise ready to act on.

Both chambers had hammered out a substantial bipartisan agreement on bill language before the House Democratic leadership came back into town.  Indignation from all over the Hill was evident on social media Sunday night.

But the House Democrats’ draft posted late on Sunday is stuffed full of agenda items that reach far beyond the current crisis.  Compared to the 580-odd pages the Senate was working with, the Pelosi bill is a whopping 1,119 pages.

The Pelosi draft is clearly an instance of the Alinskyite dictum: “Never let a crisis go to waste.”

There are multiple policy areas, such as a mandated forgiveness of $10,000 on each extant student loan (a really lousy deal for people who already faithfully paid off their loans, or spent more much faithfully paid them down.  Not to mention a lousy deal for the taxpayers who didn’t take out those loans – a number of whom are former students who’ve been paying off their own loans, and now have the taxpayers’ privilege of also paying off other people’s loans).

These are just some of the unrelated demands Senate Democrats have used to slow relief for workers and families:

This is a crisis. Why is only one side acting like it? pic.twitter.com/MRfnXT1HJ2

But let’s focus here on the pages of provisions to control voting procedures in the states, so that voting fraud can be undertaken much more easily than ever before.

The fun starts on page 650 of the bill, which prohibits requiring voter identification in order to cast a ballot, and eliminates any requirement for notarization of absentee or vote-by-mail ballots. 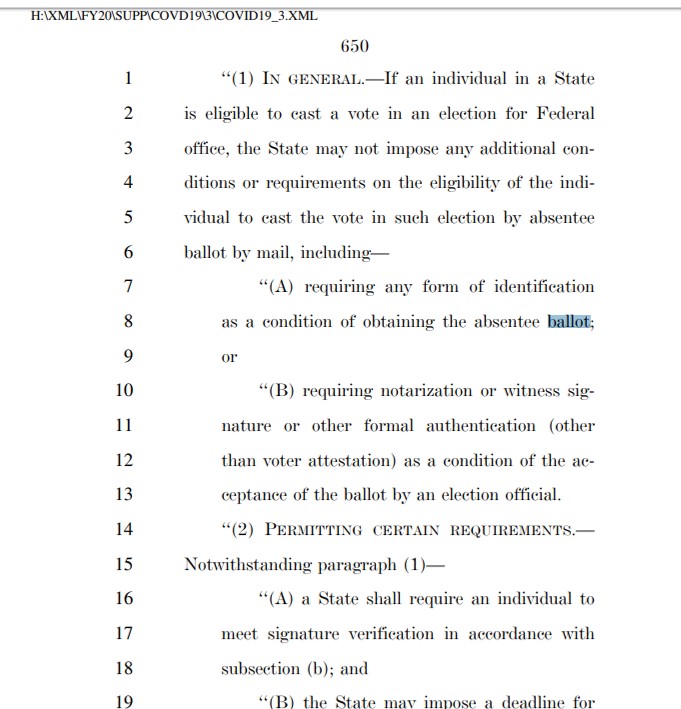 The draft goes on to prescribe signature-matching as the only method of verifying that the ballot has been cast in good faith by the registered voter.

But determining there’s a discrepancy between a voter’s signature and the signature on a ballot won’t be a simple matter.  The Pelosi bill requires a minimum of two officials to pronounce the signature non-matching – and only people who have “received training in procedures used to verify signatures” can make such a determination. 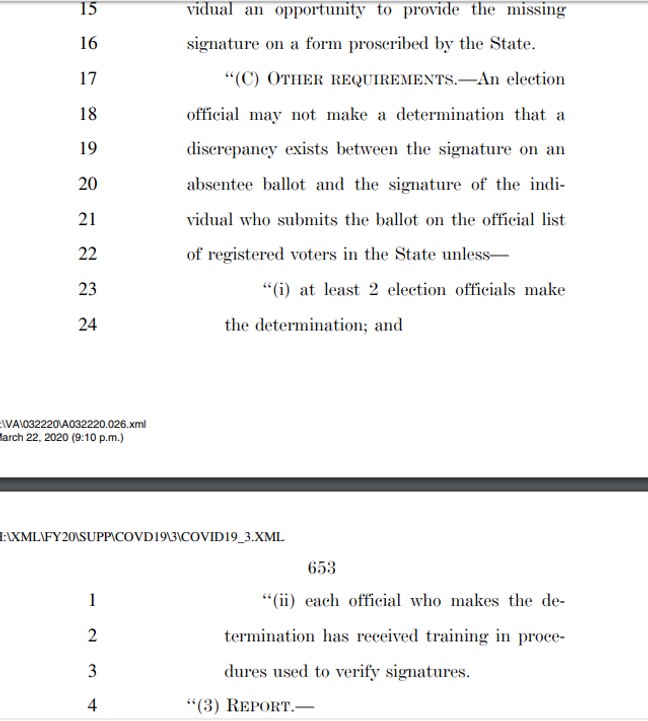 Forget the administrative hurdle of getting such training for election workers across America.  You could litigate what procedures are adequate and appropriate for verifying signatures for years.

The Pelosi bill goes on to set the standard for states to make vote-by-mail ballots available to voters.  The standard: voters have to be able to apply online. 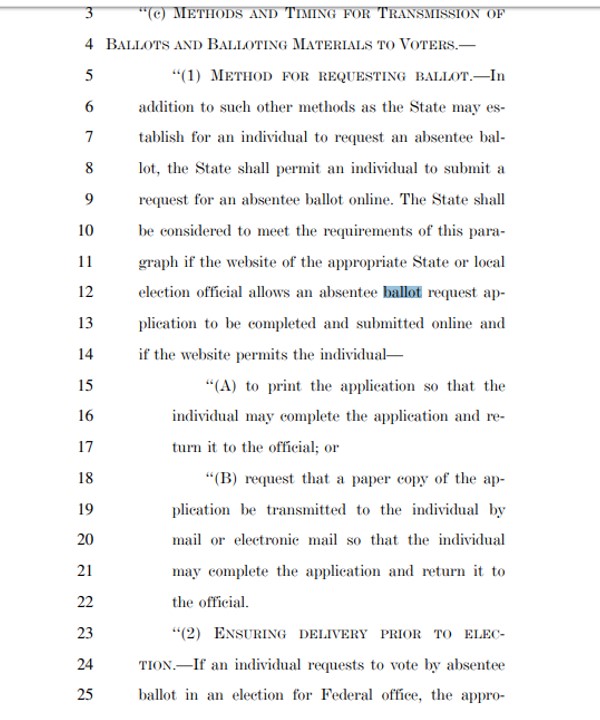 Yeah, no chance whatsoever of fraud with that one.  Might as well just call Vladimir Putin and say, “Pooty-poot, my dude, it’s all yours.  Give those hackers and Internet trolls you got on staff a real job.”

Oh, but there’s more.  On page 655, the bill mandates that in a time of crisis, such as the one we’re in now, mail-in ballots must be sent automatically to all registered voters. 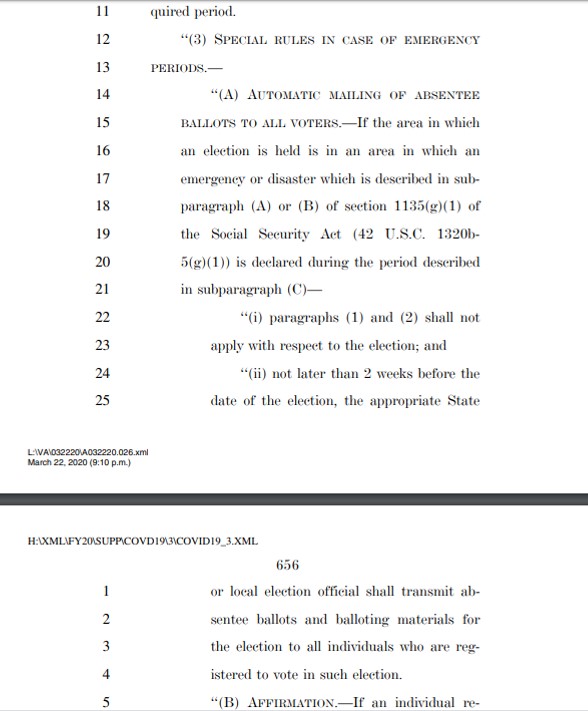 The bill then thoughtfully recognizes that even with automatic dissemination of mail-in ballots, not all voters will be able to get their ballots in without help.  After stressing that states must allow these ballots to be dropped off at designated collection points, as well as sent through the mail, the Pelosi draft states that anyone can be “designated by the voter” to turn a ballot in on his or her behalf.

There is apparently no formal procedure for such designation, and the designee can turn in as many ballots as anyone’s little heart desires, as long as he or she is not being paid for it. 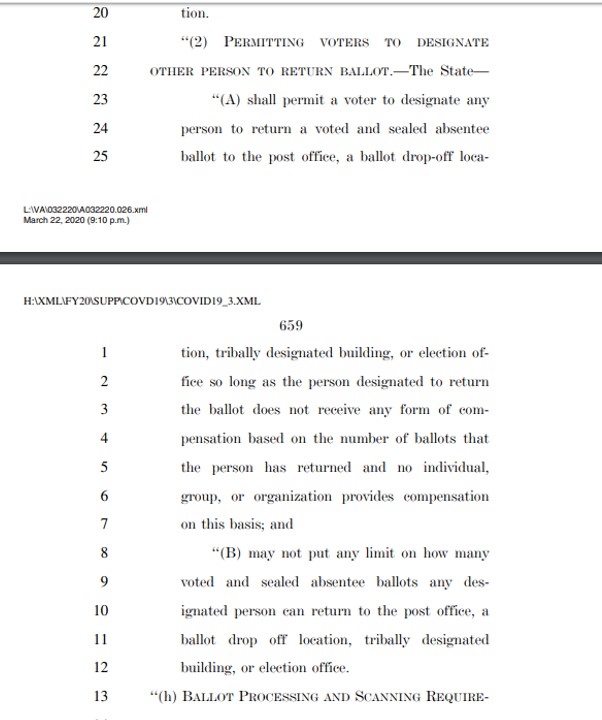 The bill also clarifies that all this is to start with the November 2020 general election.

But there’s one more (and there may be more; I’m just making a cut-off here in order to get this posted).  A little provision at the bottom of page 659 would serve up maximum chaos: 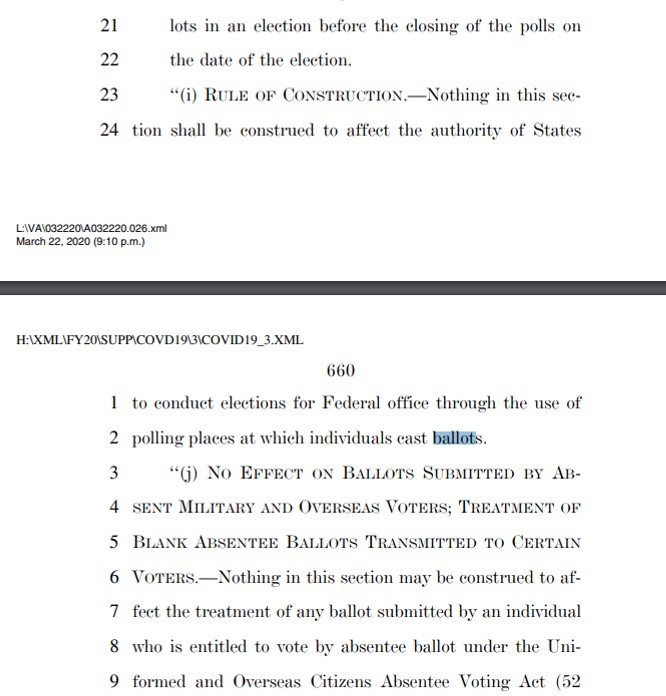 (i) RULE OF CONSTRUCTION.—Nothing in this section shall be construed to affect the authority of States to conduct elections for Federal office through the use of polling places at which individuals cast ballots.

So: states will be required to mail ballots to everyone, but then – sure, why not – may of course use conventional polling places as well.

We can be assured that the number of disputed ballots and apparent cases of double voting would “necessarily skyrocket.”  If states didn’t foresee that before the November 2020 election, they’d know it from the smarting pain afterward.  The states would be incentivized to migrate away from in-person voting of their own accord.  Under this new “emergency” condition, in-person voting would seem to be “creating” additional problems.

All of these are to be permanent revisions to U.S. federal law.  But note that since the states administer voting for all elections, and quite a bit of this (starting with voter ID) could be construed as encroaching on the states’ constitutional purview, the litigation would start immediately — whether the courts under coronavirus conditions are ready for it or not.  Between now and November, the potential political uses of this legislation to sow an atmosphere of uncertainty, dispute, and missed deadlines are endless.   This is disgusting.