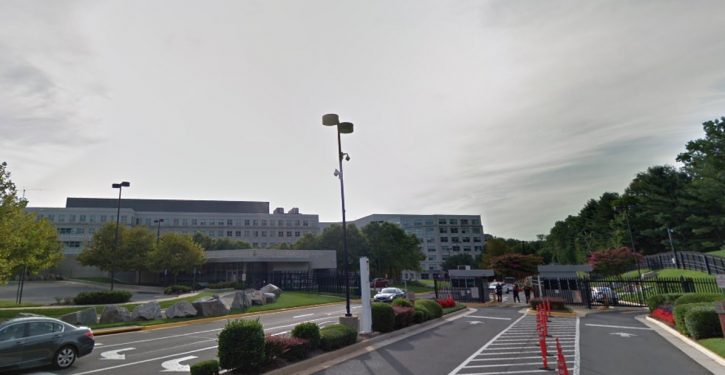 Entrance to IC Campus in McLean VA, where ODNI offices are located along with other agencies like NCTC. Google Street View image

This is positive news.  It isn’t likely to get a lot of coverage from the mainstream media, but the interesting thing is that it’s getting any at all.

On Monday, CBS News reported being informed by “a senior official from the Office of the Director of National Intelligence (ODNI)” that previous reporting on the contentious election security brief to the House Intelligence Committee had been inaccurate.

“During the [February 13] briefing,” said the official, “the Intelligence Community did not state that Russia is aiding the re-election of President Trump.”

Moreover, the official continued, “This was an interagency briefing with pre-coordinated messages that had been briefed to other congressional committees.”

Both of those statements are significant.  The first one, because it directly contradicts the claim from last week – attributed by both the New York Times and the Washington Post to “sources familiar with the briefing” – that the ODNI briefer did tell congressmen Russia was trying to aid President Trump’s re-election.

The second statement is significant because it represents a much-needed signal that ODNI will be putting out coordinated, approved messages about these matters of official assessments and national security.

I read it as meaning that national intelligence messaging is not going to be an unrefereed free-for-all, with surprise themes popping out through leakers from the back alleys, as it has been for some time now.  We have no way of knowing at this point how high up the decision to lasso this bucking bronco goes, but it’s a good bet it’s at least as high as Richard Grenell, if not higher.

The CBS article acknowledges that this is a new set-out:

The official’s pushback was a rare effort by ODNI, which serves as the head of the 16 U.S. intelligence agencies, to dispel inaccurate accounts that have emerged of an intelligence assessment delivered at the House briefing by Shelby Pierson, the Intelligence Community Election Threats Executive.

As recounted in my earlier articles, here and here, the discrepancy in what Pierson was said to have briefed was noticeable between her 21 January interview with NPR and the media reports about the 13 February brief on the Hill.  It seemed unlikely that she was really briefing two contradictory things in that short span of time.  But without a strong counter from ODNI, leakers – from whatever entities (including Congress) – were left to tell the story however they wanted to.

Now we’ve got a data point that says the leakers sold us a load of manure.  What Pierson briefed to the House this month probably didn’t differ much from what she told NPR last month.  I imagine, since it was classified, that it had a little more detail (although frankly, probably not that much more, given the subject matter).

The benefit of the official push-back from ODNI is that it puts the media on notice to expect coordinated and consistent messages from the intelligence community.  Part of that message is, implicitly, “Don’t buy everything you hear from leakers.”

But what gives that point informational credibility is the good-faith assurance: “We’ve got a community-coordinated message, and we – not the leakers – will let you know what it is.”

That doesn’t mean ODNI is going to give an account of every classified briefing that gets delivered to Capitol Hill.

But I’m betting the new leadership at ODNI has already realized that on a core issue like election security and foreign threats, the community needs to have a fuller assessment than the one given by Shelby Pierson in January to brief the public with, sooner rather than later.

Unfortunately, the Democrats in the House will be working against that effort.  Assuming that the House Republicans and the ODNI statement are correct, and Pierson did not say Russia was aiding Trump to get him reelected (which would comport with her remarks to NPR in January), it’s probable that the leaks to NYT and WaPo actually came from Democratic lawmakers, rather than from IC briefers.

But with a track record of positive communication, ODNI can shape expectations in a way that generates trust and accountability.  I hope to see more of it.  Making it essential – worthwhile – for the media to do their pro forma due diligence with ODNI after getting those leaks is a big step in the right direction.