Poor Joe Biden! Here all he wants to do is be president of the United States, and all these nasty people won’t leave alone and let him run the country in peace.

It’s not just the Republicans who are on his case, either. Last week the New York Times fried his bacon over a previously untold story about how he was arrested in South Africa in the 1970s while there to lobby for Nelson Mandela’s release from prison. The Times writers even asked sources close to Biden back then for confirmation. None was forthcoming.

Now the former vice president is experiencing déjà-vu all over again. This time the source of his angst is another “friend”: “Face the Nation” host Margaret Brennan. Biden was a guest on the program on Sunday. Much of the interview focused on his dwindling chances in South Carolina. Biden was testy and contentious throughout. But he became downright hostile when Brennan suggested that the Palmetto State was his “firewall.”

Watch beginning at 0:33. The transcript follows:

Joe Biden: You said it [sic] my firewall.

Brennan: The campaign has said it’s your firewall.

But here is what Biden said in an interview, this one with MSNBC, on Feb. 2, following his very poor showing in New Hampshire and Iowa:

I think I’ll do well in Nevada. And I think I have a real firewall in South Carolina. And then we go into the Super Tuesday states that have a significant number of minorities and African Americans. I think I’m gonna do fine. So I don’t think that this is like it has been in the past, that if you haven’t won the first two that you’re done.

Even as he scrambles furiously to avoid the inevitable, Biden does himself no favors by lashing out at his supporters in the media.

Mike Bloomberg prepares media onslaught against Dem front-runner Bernie Sanders
Next Post
Cartoon of the Day: Berning down the house 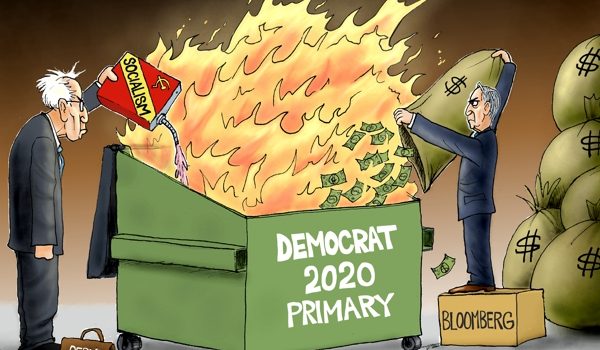