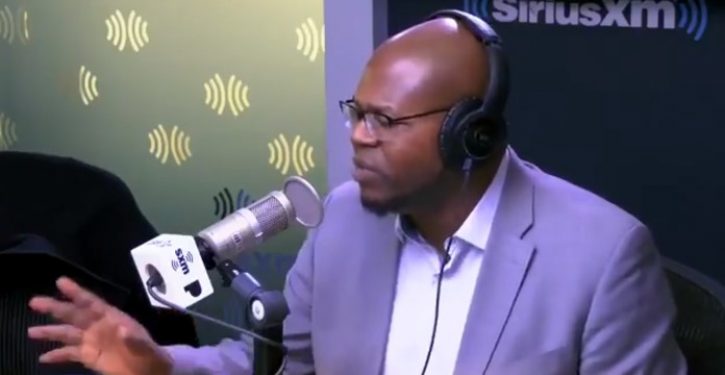 MSNBC contributor Jason Johnson walked into a buzzsaw Friday after referring to black women who support Bernie Sanders to be “misfit black girls” and many of his white backers as racist.

Johnson, who appears frequently on MSNBC to analyze the state of the 2020 Democratic presidential campaign, made the comments in an interview on Sirius XM.

“Racist, liberal whites seem to love them some Bernie Sanders.

He cares nothing for intersectionality. I don’t care how many people from the island of misfit Black girls you throw out there to defend you.”@DrJasonJohnson on Bernie’s staff & supporters. MSNBC should sever ties. pic.twitter.com/abxZKsFhaA

Johnson was widely condemned over the remarks, including on his own network.

Benjamin Dixon, the editor of The Progressive Army and a supporter of Sanders, called out Johnson during an interview on MSNBC.

“There is a large coalition of people who believe in what he’s trying to do for the working class, because quite frankly there is a lot of black people who are working class and not just misfits, according to Dr. Jason Johnson of your network,” said Dixon.

“Wow, really?” she tweeted. “Please the next time you talk smack about us, have the decency to put some respect on our names!”

“I don’t get outraged easily, but this is outrageous and ridiculous,” he said of Johnson’s remarks.

“I hope we can have political disputes without engaging in open racism and sexism. This misogynoir [sic] is disappointing, but not surprising from @DrJasonJohnson,” wrote Sanders campaign press secretary Briahna Joy Gay.

Johnson is no stranger to making inflammatory political remarks on MSNBC.

During an March 13, 2018, interview he predicted that President Trump would some day say the “n-word” at a rally.

MSNBC’s media relations team did not respond to a request for comment.