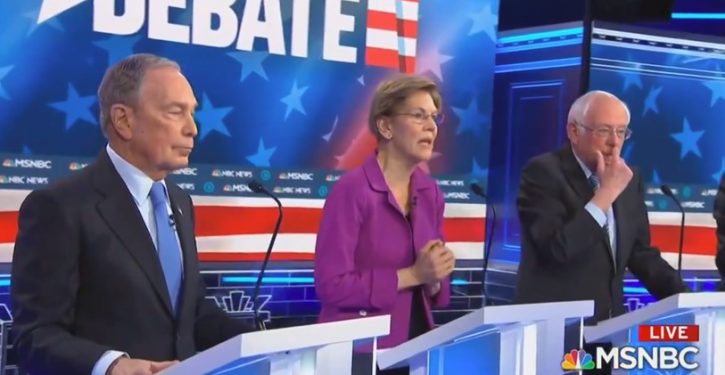 By the time the battle royale waged by six Democratic candidates for president ended last night, it was clear that the contest produced six losers and zero winners. The candidate who suffered the brunt of the flak not surprisingly was the one the others on stage had in their sites before the house lights went down. I am referring to Mayor Michael Bloomberg.

The first cut inflicted on him — by Sen. Elizabeth Warren — was the unkindest of the night. Warren, raising her hand frantically like a ten-year-old in school, said when called upon:

I’d like to talk about who we’re running against: a billionaire who calls woman “fat broads” and “horse-faced lesbians.”

And then she delivered the punchline:

Warren just scalped Bloomberg in front of the entire country.

The dig was well-deserved. As I have reported over the past few days, Bloomberg has savaged every one of the Left’s protected classes, some more than once. He has been especially brutal toward women, having allegedly said of women he considered attractive “I’d f*ck that in a second.” According to court documents in a lawsuit filed against him by a former employee, he said to a group of saleswomen when a male colleague was getting married, “All of you girls line up to give him [oral sex] as a wedding present.”

Although Bloomie left the stage in worse shape than when he walked onto it, he got in his licks. Front-runner Bernie Sanders’s blood pressure rose a few ticks after Bloomberg took this shot at him: “What a wonderful country we live in. The best known socialist in the country happens to be a millionaire with three houses. What’d I miss here?”

Bloomberg: "The best known socialist in the country happens to be a millionaire with three houses." #DemDebate pic.twitter.com/zEgOs6vyp9

Mayor pete Buttigieg and Amy Klobuchar duked it out over which is the more moderate of the two. Klobuchar’s weakness as a candidate was showcased by her inability to win that argument against a candidate who recently vowed to be “most progressive president we’ve had in half a century.”

Three reasons Richard Grenell is an excellent choice for DNI
Next Post
Cartoon of the Day: Bummer crop 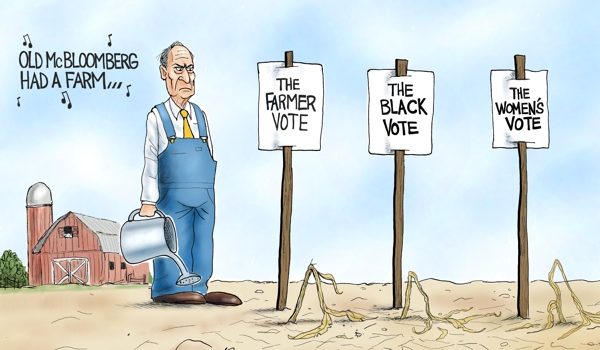