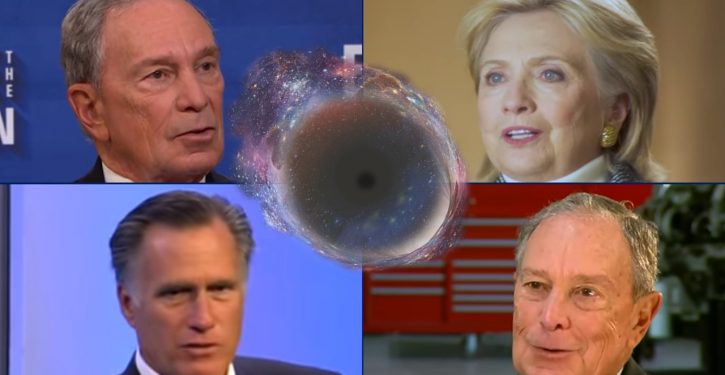 It may be too much to say that these are really competing “dream tickets.”  On the Democratic side, the ticket is merely one that was floated over the weekend, in a Drudge original report that Mike Bloomberg was considering bringing on Hillary Clinton as his running mate.  The Bloomberg campaign promptly disavowed any such thing.  A number of news and commentary outlets have weighed in to pooh-pooh it.

But assuming that Drudge wasn’t just making this up (and I see no reason to think he was), it does suggest that someone with a claim to inner-circle knowledge was thinking along these lines.  Notably, the report has already spawned its own Silly Snopes Fact Check, with Snopes assuring us that a report of State Farm canceling Bloomberg’s life insurance is “satire.”

On the Republican side, or at least somewhere to the right of Bernie Sanders, the Never Trump outlet The Bulwark came out shortly after the Bloomberg-Hillary bomblet with its “unity” proposal for a Romney-Bloomberg ticket.

Since The Bulwark purports to do the thinking for “principled conservatives,” this slate is something of a head-scratcher.  Mitt Romney and Mike Bloomberg, between them, have a virtually unblemished record of never encountering a progressive government program they don’t like.  If they’re about “conserving” anything, it’s government authority, government regulatory programs, government edifices, and government sinecures.

Romney and Bloomberg will let you know if smaller government might happen to be good for you, as regards a given problem.  Otherwise, please don’t burden the public dialogue with your unlettered objections to being regulated and taxed.

A few things can be said about these random bleats from the Old Consensus back room.  One, the average age of the suggested candidates is 74.

Two, the candidates have all been in politics for years (if not necessarily in office), and (a) are the problem that sent voters scurrying to Trump (and to some extent Sanders), and (b) are tethered firmly to that problem; i.e., the Old Consensus way of thinking.

(The Old Consensus, as I define it, is about achieving compromise between antithetical ideas of government – progressivist statism versus the American ideal of limited government – by creating government programs with theoretically limited charters and heaving debt-financed money at them.  Over time, the programs, chugging on under the aegis of revolving-door activists, systematically reduce our liberties and rights.  In partisan politics, the visible dynamic has been Republicans purchasing a leftward-sliding consensus with Democrats by agreeing to spend money and enlarge the state, while everyone pretends it’s for limited ends.)

Three – and this one is a very simple point, but telling – there are only three individuals in this mix.  Not four.  Bloomberg is on both tickets.

And Bloomberg is no moderate, or “centrist.”  He’s a chronic interventionist, big-government pol, and something of a carpetbagger, for that matter.  He wants to take people’s legally owned, constitutionally protected firearms away from them.  He had no problem with limiting the size of a soda that New Yorkers could buy in private transactions, and with ordering food vendors to cut out salt.  He thinks it’s important to tax the poor for their own good.  If you’re 95 and have a prostate problem, immediately move out of any jurisdiction Bloomberg has authority in, because he’s coming for your last best hope.  “We,” according to Bloomberg, can’t afford to treat you.

The common failing of the supposed “centrists”

The thing about both Romney and Hillary Clinton, meanwhile, is that they don’t actually differ from Bloomberg in this regard.  They just talk a slightly better game, dropping a line here and there about “fairness in free markets” and “giving a boost to working people” or whatever.

What they mean is still, basically, coming down on the side of cutting off your salt and limiting your medical-care options for the common good.  They mean it because they’re politically invested in the regulatory juggernaut that plans to do it.  They’re philosophically aligned with it.  But they don’t just blurt it out like Bloomberg.

These standard-bearers of conventional politics could hardly be improved on as symbols of what got us to where we now are politically: dysfunctional, fretful, overgoverned, overtaxed, under constant rebuke from a presumptuous governing class, and thoroughly polarized on the question of what to do next.

If you want a way to think about why we’ve got one chariot race tearing off behind Bernie and one galloping off behind Trump, and neither political party able to withstand the heavy winds of brand-busting change, look at what the Old Consensus line of political thought has thrown up.  In order of age, Mike, Mitt, and Hillary.

They are not the future.  Everybody knows it.

And there is no option now of aligning or uniting behind the unsustainable, brokedown, over-indebted past as a path to the future.

But Sunday night I saw the TV campaign ad for Bloomberg, no doubt seen by many, in which former President Obama gave Bloomberg his support just prior to the Nevada primary.  (Which Bloomberg isn’t even competing in, but for which he will be participating in the candidates’ debate.)  So Obama, at this stage, has finally endorsed.  And he’s thrown in behind Mike, supposedly a centrist “pragmatist.”  (Obama speaks in the ad of “pragmatic” solutions.  How it could be pragmatic to seize guns and order the people’s salt restricted is beyond me.)

That’s also what The Bulwark thinks it’s doing with Romney-Bloomberg: being pragmatic and appealing to the center.

The center has not held

It’s because there is no center.  The center has not held – because it cannot.  Government is too big now.  Every compromise costs too much, because the stakes are so high.  Policy debates literally are about seizing guns from the people and denying cancer treatment to the elderly.  No one can afford to “compromise” on principle in these matters, or blissfully ignore what quiet regulators are doing out of the spotlight.

The appalling outcome, long warned of by people with simple common sense, is now here. Policy debates are about things we can’t agree to disagree on, because they have to cost someone his rights, liberty, and even life.

It was always a costly fiction that there was a “center” between government demanding to rule over the people in all things – the modern Left – and the uniquely American ideal of limiting government, in some ways absolutely.  To the extent anyone still understands himself to hold the latter position, it’s on the Right.

There is in reality no center between these positions.  They arise from incompatible mindsets.

The Left sees regulation by the state as necessary in all things.  There is no other way to see this than as the government ruling over us in all things.  For the Left, the ascendant -ism of the last century, no prior limitation on government’s powers can be allowed to interfere with the program of regulatory control in all things.

So here we are.  The true believers in regulation — better, regimentation — in all things are passionate followers of Bernie.  Why?  Not because he’s really much more radical in that regard than the other Democrats.  It’s more because he has for decades maintained a crusty, rigid-seeming commitment to the resentful, punitive regulatory juggernaut of socialism.  He has earned “Red cred.”

Yet there are other Bernie bots who couldn’t define socialism if you spotted them the “collective,” “state-controlled,” and “ownership of the means of production” clauses.  They just know Bernie seems like a radical alternative to all the same-old-same-old Democrats, with their cynicism and big-money donors and establishment taint.  For these Bernie bots, Mike and Hillary, and many of Hillary’s fellow Democratic politicians, are just as tainted as Mitt in that regard.

Over on the Right, the believers in limiting government are mostly committed to Trump.  But it’s not because Trump articulates a game plan in that regard, as the legacy Right would (understandably) prefer.  He doesn’t.  He never has.  He came into office talking about trade, securing the border, and putting America first, usually in that order.

But Trump has ended up rolling back more regulation in his first term than Reagan did in two.  Using the Obama model for executive action, in at least some cases, Trump did a series of “Obamas” in reverse: lifting regulation rather than increasing it.

Go down his laundry list of accomplishments celebrated on the Right, and you find that Trump didn’t get elected by laying out systematic views on those matters.  Some, he barely even talked about in 2016.  But he has produced results largely gratifying to the belief in limited government and maximum liberty for the people.

Few on either side of the political spectrum can now competently imagine life without these features of government and politics – even though such life existed as little as 80-90 years ago.

So they’re not all pure limited-government believers.  Some are one-issue cranks, for that matter (e.g., some, if not all, of the “Audit the Fed!” advocates).

But, like many of the Bernie bots, who couldn’t identify actual socialism if they found it dead in their lunchbox, the Trump fans know cynicism, exploitation, and corruption in politics and government when they see it.

And they identify those quantities with, precisely, Hillary, Mitt, and Mike – and with more Republican politicians than the GOP would care to admit.  Trump is the alternative: the guy who doesn’t act like the rest, and who has earned “limited government cred,” not by talking but by doing.

So it’s bemusing and even amusing that the keepers of the establishment can find nothing more appealing to throw against the wall than the superannuated trio of Mike, Mitt, and Hillary.  It won’t stick.  The past is now the ash heap of history.  The unsustainable “center,” bought with decades of deficit spending and debilitating pretense about its intentions, has frayed to nothing.

We choose now between life, and death.  There’s no halvsies option in 2020.  (Hint: Choose life.)