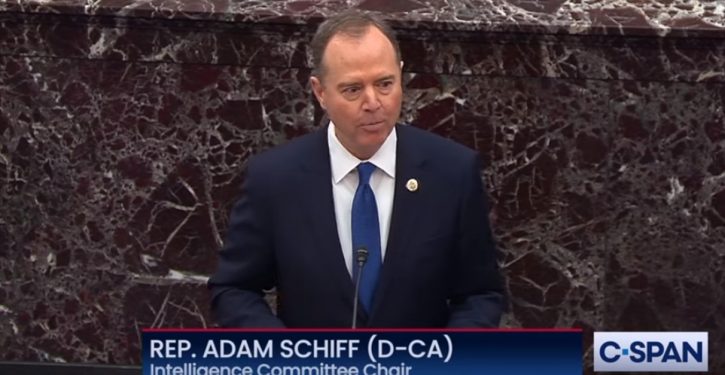 A brief comment on this now-viral passage from Adam Schiff’s closing argument in the Senate impeachment trial.

If abuse of power is not impeachable, even though it is clear the Founders consider it the highest of all high crimes and misdemeanors – but if it were not impeachable, then a whole range of utterly unacceptable conduct in a president would now be beyond reach.

Trump could offer Alaska to the Russians, in exchange for support in the next election … or decide to move to Mar-a-Lago permanently and let Jared Kushner run the country, delegating to him the decision whether to go to war.

Because those things are not necessarily criminal, this argument would allow that he could not be impeached for such abuses of power.  Of course this would be absurd.  More than absurd; it would be dangerous …

The video of the entire closing argument is below.  There are more buried – and false –  premises in it than there are skeletons in a 500-year-old European cemetery.  If you have the time and patience for them, feel free to check out, among other things, the solemnly tolled account of Trump having the gall to appoint an attorney general he approves of (unlike Obama, who surrounded himself with – well, actually, attorneys general he approved of, and could count on to stonewall congressional probes).

For the riff on “offering Alaska to the Russians,” start at the 5:00 mark.

One observation is that you could set a whole team of seminarians to parsing those buried premises out and not catch all of them.  Consider just this statement:

If abuse of power is not impeachable, even though it is clear the Founders consider it the highest of all high crimes and misdemeanors …

But it is not at all clear that the Founders held this view.  It would be more accurate, in fact, to say of them that they recognized “abuse of power” as a matter of perspective and judgment, rather than a form of easily-discerned, readily-defined high crime.  The party out of power frequently perceives power to be “abused,” or at least purports to do so because that can often be a profitable political charge.

The Founders knew that, and were more determined than any constitution-framers in history to rein the impulse in.  Political claims about “abuse” can arise where the only offense is the opposing party winning a due-process vote, and such claims should not, as the Founders saw it, whipsaw the steady course of government.

The Founders – or, more accurately, the Framers of the Constitution – wanted to ensure that the usually-politicized charge of “abuse of power” would not be easily weaponizable against due-process outcomes, rather than that it would be.

Schiff’s hypothetical “abuse” situations are in any case ridiculous.  They’re not even interpretations of something that we mostly agree has actually happened, like Trump’s assurance to Ukraine that he encourages Ukrainian investigations into the events of the 2014-2016 period, including the ones Americans were involved in.

No, Schiff’s scenarios are just flights of fancy.

They’re the hypotheticals of a six-year-old.  In a 59-year-old man, they are a disquieting symptom.

At 1:30 AM in Iowa, hours after caucus votes, no results reported due to ‘inconsistencies’
Next Post
Bloomberg just gave gun owners 60 million reasons to get involved this year