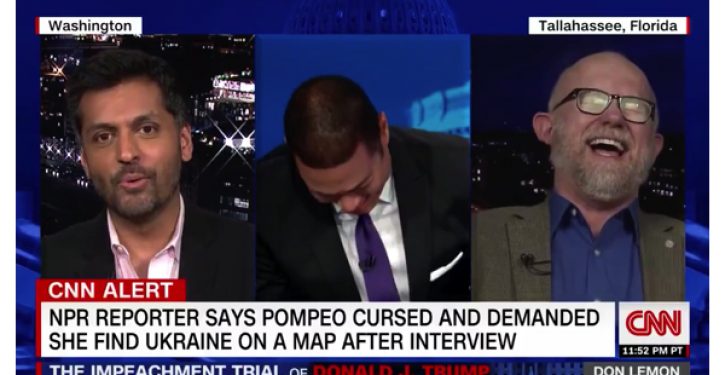 In case you missed it, CNN’s Don Lemon was rocked with convulsions of laughter on air on Monday as he and two guests belittled Trump supporters:

Wilson got the party rolling by saying that “Donald Trump couldn’t find Ukraine on a map if you had the letter ‘U’ and a picture of an actual, physical crane next to it,” which sent Lemon into a hysterical fit of laughter. They were just getting started.

Lemon who himself has made some incredibly stupid statements on the failing cable network is one to talk about someone else’s intelligence. That aside, he was apparently called on the carpet by management for his unseemly behavior and ordered to deliver a mea culpa. Here is what he had to say in his own defense. Judge for yourself whether Trump supporters will be mollified.

#BREAKING: @DonLemon addressing the now-viral Saturday @CNNTonight segment mocking and showing such venom toward Trump supporters. Not surprisingly, Lemon deflected: "I don't believe in belittling people….In the moment…I didn't catch everything that was said." pic.twitter.com/oI4eNz7rkR