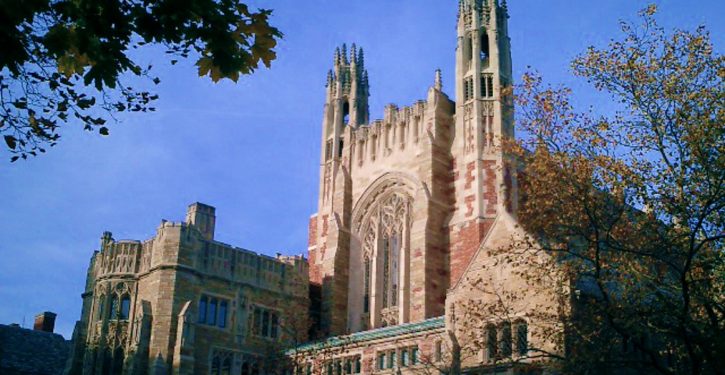 “Yale will stop teaching a storied introductory survey course in art history, citing the impossibility of adequately covering the entire field … in one course.” So reports the Yale Daily News, the university’s  student newspaper. Hmm, the adjective storied suggests the school has long offered the course, which apparently was never impossible to cover adequately before. So why the change? The next paragraph explains:

Decades old and once taught by famous Yale professors like Vincent Scully, “Introduction to Art History: Renaissance to the Present” was once touted to be one of Yale College’s quintessential classes. But this change is the latest response to student uneasiness over an idealized Western “canon” — a product of an overwhelmingly white, straight, European and male cadre of artists. [Emphasis added]

Note to non-white, gay, non-European, and non-male artists: You better hurry up and paint and sculpt lots of stuff so the university can re-institute the “storied” course.

This is not the first time a prestigious American university has made an adjustment to its long-standing curriculum to cater to the whim of twenty-first century moralists. In 2016, students at Stanford voted to abolish a Western civilization class on the grounds that it was “non-representative,” and earlier this year protesters at Notre Dame demanded that 50% of white male authors be banished from the curriculum.