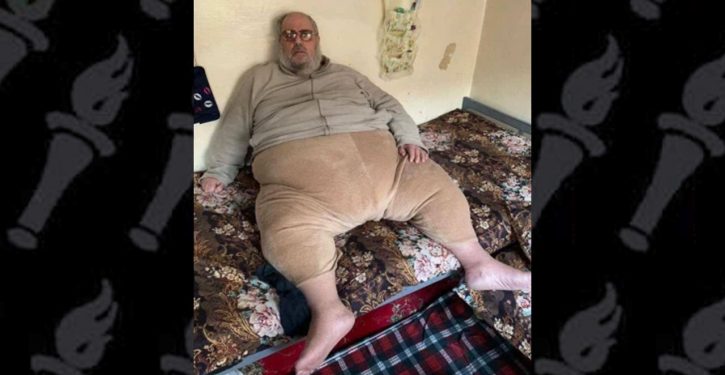 Iraqis don’t miss the ISIS goons who wreaked havoc in their streets for years, especially in the northern city of Mosul.  Mosul fell under ISIS’s brutal rule in mid-2014, and wasn’t fully liberated until three years later in July 2017.  Prolonged battles in both cases left the city a smoking ruin, largely reduced to rubble, with many inhabitants driven out on foot never to return.

Those who did remain were subjected to neighborhood raids, theft, rape, abduction, torture, intimidation, and summary execution.  Much of ISIS’s civic management, in both Iraq and Syria, was justified under fatwas issued by a senior cleric, Abu Abdul Bari, who also goes by the name Shifa al-Nima.

Iraqis in Mosul know him as “Jabba the Jihadi” — because he is morbidly obese, and apparently can barely move.  He was arrested on Thursday, and his weight has been variously given as 560, 600, and 650 pounds.  (A BBC report put him at 40 stone, which would equate to 560 pounds.  That looks probable given the pictures.)  Weighing him at all would clearly take special equipment.  According to local news sources, he had to be removed by security forces in the bed of a pickup truck.

British journalist Maajid Nawaz, a counter-extremism activist, played on the Star Wars theme when he posted at Facebook: “Today was a good day for the Force & a bad day for evil.”

As Nawaz explained, “Most religious justifications provided to ISIS for enslaving, raping, torturing, ethnic cleansing & massacring Iraqis, Syrians & others are from this paltry beast who can’t even stand on his own two legs.”

The New York Post reports that “Bari issued religious decrees — or fatwas — ordering the execution of scholars and clerics who refused to pledge allegiance to ISIS when the terror group occupied the city.”

The power of Bari’s position was significant.  The sedentary, nearly immobilized mufti wrote the social-terror script for ISIS during its gruesome years in power.  Nawaz is careful to caution against ridiculing obese people: “[U]se my above point not to mock obesity, but to mock the hypocrisy & debasement of a man who sanctioned enslavement, rape & ethnic cleansing and mass murder.”

But he notes the ironic satisfaction of seeing Jabba the Jihadi loaded like a speared walrus into the back of a truck:

It is good that Syrians, Iraqis & others witness the debasement of this scum. That he is this obese, this immobile & this humiliated is yet another blow to ISIS imbeciles who thought God was with them.

Do not underestimate the psychological blow the image of this obese monster being arrested is to ISIS. Gluttony is frowned upon by jihadists. But also, ISIS branded themselves as fighters possessing rare courage & discipline… meanwhile this walrus was their top religious cleric.

The contrast is especially stark with the Washington Post’s description of blood-drenched ISIS leader Abu Bakr al-Baghdadi as an “austere religious scholar” in the days after al-Baghdadi’s death at the hands of U.S. Special Forces.

The piously respectful tone of the Post’s obituary for al-Baghdadi may have bordered on the fatuous.  But what most Americans now remember is that Baghdadi blew himself and his children up with a suicide vest while being chased down a tunnel by a military working dog named Conan.

We have declassified a picture of the wonderful dog (name not declassified) that did such a GREAT JOB in capturing and killing the Leader of ISIS, Abu Bakr al-Baghdadi! pic.twitter.com/PDMx9nZWvw

Now Iraqis have the memory of the fatwa-spewing cleric, who issued “religious” license to their ISIS torturers, as a slack, corpulent wreck splayed in the back of a pickup truck. 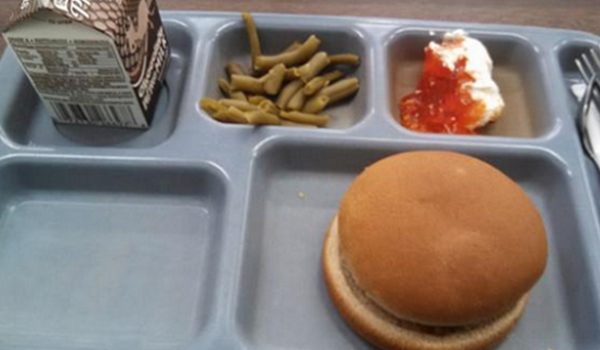