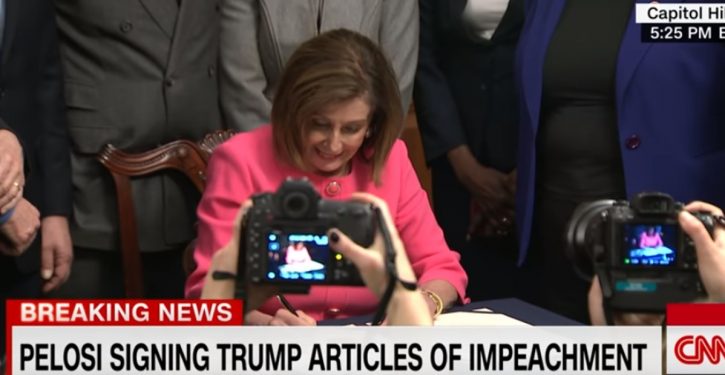 Like most Americans, I just couldn’t get into the impeachment signing ceremony on Wednesday.  Or read historic solemnity into the pen giveaway, or the ceremonial walk of the House managerial team to the Senate.  (Where the Senate, as previously warned, was not ready to make a ceremonial acceptance of the charges.  McConnell announced that they’d be ready for that on Thursday.)

Given the circus in the House, I’m surprised she didn’t use crayons. ? ? ? https://t.co/hGTIGvb2Ey

Nancy Pelosi has souvenir pens emblazoned with her signature that she’s using to sign the articles of impeachment pic.twitter.com/Xte3yH45vj

One reason for the lack of interest was the buzzing-gnat distraction created by Sudden Ukraine Guy Lev Parnas’s interview with Rachel Maddow.

Amazing, stunning 1-hour @maddow interview on MSNBC just aired w/ Rudy co-conspirator Lev Parnas. He spills all the beans to her. Backs up the Impeachment indictment that Trump was personally directing the extortion & treason re: 2020 election. Pls watch rerun in 2hrs! 12/ET 9/PT

Have we learned nothing from Russiagate? Lev Parnas has: a history of fraud; claims w/ big holes; & a motive — indictment — to embellish for Dems’ help & a book deal (e.g. Michael Cohen). Oh, & his “bombshells” were delivered to the liberal Alex Jones. Don’t get your hopes up.

Which I also didn’t watch live, but which kept obtruding itself in breathless updates and video clips on my tweet stream.  Parnas seemed well coached.  He doesn’t have anything to say that will stand up under close questioning, but he’s larded it up like a banned-in-California goose liver with repetitive claims that Trump knew all about his nefarious shenanigans, even if we’re not going to hear more about them than that he (Parnas) scribbled some misspelled words on Ritz-Carlton stationery from Vienna.

The House Intelligence Committee has just released new evidence in the Trump impeachment case, including phone records and documents from Lev Parnas, an associate of Rudy Giuliani.https://t.co/VloJG1u5Rz pic.twitter.com/UGRLWnV11E

I may have some Ritz-Carlton stationery lying around here too, come to think of it.  Bookmark this, in case I scribble something on it and pack it off to Adam Schiff.

It’s hard to take seriously an impeachment effort that is so devoid of substance and so long on frenzied innuendo and rhetorical heroics.

Actually, check that.  A more accurate statement is that it’s hard to take it seriously on its own terms.  The serious point about the impeachment is that every proclamation made about it by Nancy Pelosi and the others ranged against Trump – Trump, the symbol and ever-present outcome of the hated 2016 election – will be reversed on their heads.

Pelosi at this morning's press conference: “He has been impeached forever. They can never erase that.”

Impeachment has been the Democrats' mission since the day President @realDonaldTrump was elected.

So, write that down: Trump will not be forever impeached.  Not only will he come through the process without impact to his presidency; he will somehow, at some point, be un-impeached.  And his impeachers will end up with the peach hue slathered on their own faces.

For the last three years, we have seen nothing but the downfall, sidelining, embarrassing exposure, and petering out from sheer vacuity of the assaults mounted against Trump, and the people behind them.  You’d think folks would have learned by now: the trumpet blast of a fresh charge just means another paroxysm of hype, sound, and fury that will redound only against the charge’s commanders, and take out some hapless bit players along the way.

A lot of people have learned that, from what I can tell.  They see clearly that tilting at Trump means turning your lance on yourself – a seemingly unlikely feat, and yet it keeps happening, like a slapstick comedy sequence growing stale.

Trump doesn’t do anything but not budge.  He doesn’t have to.  He’s not even in the scene most of the time; he’s off negotiating trade with the Chinese and rooting around in the federal budget for border wall money.

The sequence is that the attackers crash into things of their own accord, and do themselves in by their own hands – whether their hands do the work now, or did it years ago, and it was mounting the attack on Trump that turned a spotlight on it.

So it will be with whatever happens in the Senate.  The Democrats have Lev Parnas, a man under federal indictment who is trying to curry favor with prosecutors (seemingly by “composing” on sheets of Ritz-Carlton stationery), insisting that Trump knew Giuliani was trying to get the Ukrainians to … investigate corruption involving American official activities and American government aid.  Horrors.  If the president knew about that, all bets must be off.

Meanwhile, as Brian Cates of the Epoch Times points out, the Trump defense has evidence of the corruption Trump wanted investigated, which at a minimum involved billions in U.S. aid, much of which went missing under the watchful eye of USAID in Ukraine.

And both Trump and Giuliani are going to DEMONSTRATE why US diplomatic personnel in Ukraine did not want this missing money investigated or tracked.

Because they were actually HELPING corrupt Ukrainian officials steal it. Because top Democrats got substantial kickbacks.

But there’s a lot more than that.  The key point about the trial in the Senate is that the Democrats cannot silence the Republicans, who will ask questions as they see fit, and they cannot silence the Trump defense.  What it brings to the Senate, the Senate will hear.  C-SPAN will carry it, even if none of the mainstream news networks do.

And the more allegations the Democrats heap on, the more information the Trump defense will have reason to air before the public, clarifying just how rotten was the connection of the U.S. government with various entities in Ukraine during the Obama years (and possibly before that).

It’s not Trump, his 2016 campaign, or his top current officials who will be exposed in this process.

We don’t know right now whether the drama in the Senate will be a culminating event in which “the” decisive amount of information will come out.  That will depend in part on what William Barr and John Durham are ready to do.  If they aren’t ready to lay out facts and a comprehensive theory of Spygate, that will probably limit what gets exposed under questioning in the Senate.

It is interesting, however, that Michael Flynn has filed to withdraw his plea just at this particular moment.  That means his case, too, is approaching a natural crisis point – and at the very same time.  It’s clear from what the public knows that it would bring down the pillars of the temple if the Justice Department had to take Flynn to trial.  What he is entitled to bring out in discovery would expose a trail of lies and malicious intent in the DOJ and FBI going back to at least 2016, and even before.

The DOJ set this up by its own hand, when it dealt with Flynn in bad faith on his plea deal.  It breached its plea agreement with him.  He is justified in demanding that the system defend him against that bad faith.

We will see what the judge in Flynn’s case (Emmitt Sullivan) does about Flynn’s plea request; a significant factor would ordinarily be whether Sullivan’s decision would survive appeal.  Even if there is political pressure on him to deny Flynn’s plea withdrawal, my read of Sullivan is that he’s most likely to go with the rule of law solution.  And I don’t see that he has a motive to inflict gratuitous suffering on Flynn, by sentencing him under the plea deal – just because he can – while an appeal works its way upward.

But, again, we’ll see.  There is some fear – not unfounded – that Lindsey Graham, chairman of the Judiciary Committee, may be a weak link in the Senate process.  He has been unusually reticent since Ukraine became the focus of the evolving impeachment drama.  I am drawing no conclusions from that, but I regard it as a good thing that Chuck Grassley is the President Pro Tem of the Senate for the purposes of the impeachment trial.  Grassley and McConnell, if not Graham or Chief Justice Roberts, can probably be counted on to let the Trump defense be mounted without impediment from touchy, inside-the-Beltway interests.

That’s assuming all continues on the current path.  The Democrats are on a course reckless to themselves, and I do wonder if they will make some bid to draw back and not let the trial unfold as it should.  It’s hard to foresee what that would be.  But on the other hand, few if any saw the fake “whistleblower” and the Ukraine Syndrome attack vector coming.

If the trial does develop into a pitched attempt to finish off the Trump presidency, with the Democrats bringing everything they can think of, then it will be a massive wakeup – because it will be time for Americans to tune in and hear what justified the president in his actions with Ukraine.  Trump’s actions will withstand scrutiny.  The actions of Democrats between 2014 and 2019 will not.

And those actions are what will be exposed in the Trump defense.  Not out of spite, but because they directly answer the specious charges in the impeachment.  It’s not Trump’s fault that demonstrating the reality of corrupt connections with Ukraine means exposing Democrats.

So far, no amount of spin has succeeded in tarring Trump with the sins of others.  Why the Hill Democrats think it will work this time is unclear, but they are wrong once again.  Perhaps the Senate trial will be the inflection point at which their losses from turning their weapons on themselves, willy-nilly, become too great.  Even if this isn’t that time, the most they can hope for is a mortifying retreat, like Robert Mueller’s, into irrelevance. 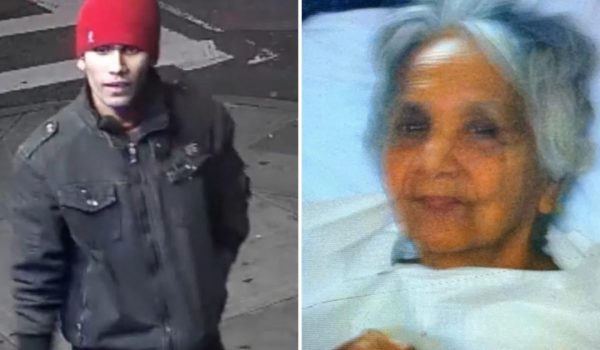 Latest victim of an illegal alien, a 92-year-old Queens woman, was raped and murdered
Next Post
After yesterday’s sorry spectacle, can we stop pretending Pelosi and pals are ‘prayerful’? 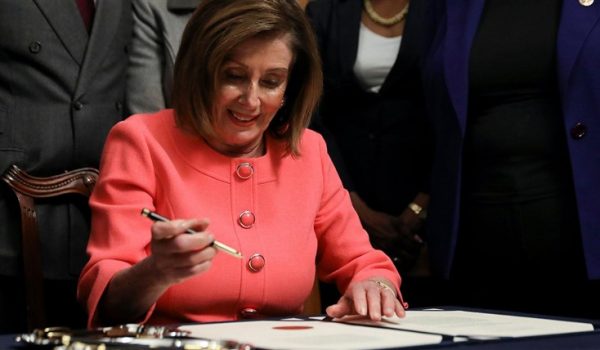