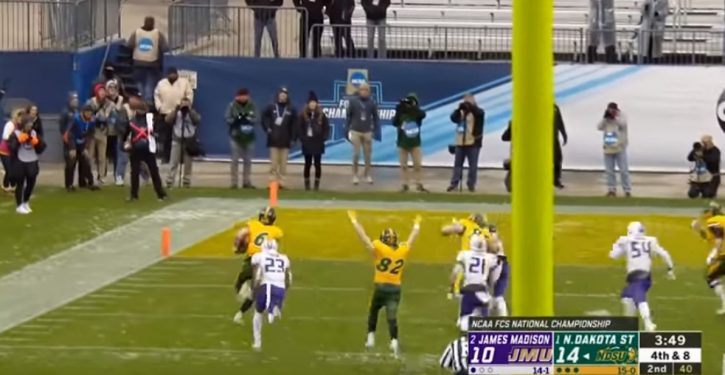 NDSU FS #6 James Hendricks takes FG snap on a fake and runs it in for 6 to put James Madison in a two-score hole at halftime, in the FCS championship game in Frisco on 11 Jan 2020. ABC video via YouTube.

Just when it seems like time to despair, with the season coming to its inevitable end, football at multiple levels gives us a weekend to remember.

I’m sure everyone was glued to the tube (so to speak) on Saturday when North Dakota State and James Madison went at it in the FCS championship match in snow-dusted Frisco, Texas.  That was actually a pretty good game.  It was evident by the second quarter that NDSU was the probable winner, but JMU hung in there and made a game of it right to the 28-20 end.  NDSU is just a juggernaut, as FCS teams go.  The Dukes had their moments, however.  There was no quit in them.  And how often do you get to see a 30-degree game-day afternoon with lowering clouds and intermittent winter-mix precip in north Texas?

The NFL even stepped up with some high-quality action.  I’m not sure even the Texans-Chiefs game would have been quite as much fun without Tony Romo in the booth, but it was still a hoot by any measure.  Good, rousing Seahawks-Packers match (whose 28-23 outcome in favor of Green Bay should gratify our correspondent Old Army Brat).

Nancy “Pigskin” Pelosi got only one gratifying outcome with the convincing Niners win; the Ravens looked uncharacteristically like they couldn’t find, er, body parts with both hands in their bout with the Titans.  The underdog win for the Titans was a “stunner,” of course, but it was disturbing to hear that the fan who collapsed during the game later passed away.  Our sympathies to his family and friends.

In the last-hurrah department, we know everyone was enjoying last Monday’s Boogerdammerung in Mobile, in which U-LA-LA knocked off Miami (OH) 27-17 in front of a small but boisterous crowd that was obviously afforded exactly the right amount of elbow room for decent, game-attending folk.  Say what you will, it won’t be nearly as pleasant at the CFP championship game tomorrow night.  Elbows are bound to transgress those stadium-seat boundaries.

Speaking of the CFP championship game, we need to get some admin out of the way.  The name isn’t cleverly integrated with that of a title sponsor, which makes us sad.  But don’t fail to take note that the CFP trophy is sponsored by Dr. Pepper.  If you’re tempted to get cynical about commercial sponsorship, remember that the POTUS thinks business and the economy are Very Important, and harbors no disdain for them (and may in fact be more aware of who sponsors bowl games than who’s playing in them).

There was most definitely a sponsor for Sunday night’s fan event: the “Taste of the Championship” premium dining event and fundraiser, which at the very least seems to have had shrimp cocktails going for it, but must have featured sausages at some point, as its title sponsor was Eckrich.  It’s perfectly timed to help tireless fans recover from the Sunday morning fundraiser, the CFP championship 5K.

Meanwhile, they’ve got this whole Playoff Fan Central Thing going, which frankly looks like it could use some firearm vendors and a gumbo roach coach.  But that’s the sort of thing that isn’t done once you rise above the Booger Bowl level.

We are credibly advised that Playoff Fan Central offers Artifacts from 150 years of college football, collected and curated and on display for fine viewing.  For some reason, they (the Artifacts) seem to come from Atlanta.  We’ll let you know if we get to the bottom of that one.

Which no self-respecting championship game week should be without.

And it does seem that a few low-brows are out doing low-brow stuff in the local recreational haunts to prepare for the tailgating and game-attending challenge on Monday.  LSU fans, of course.  Off their leash and on a toddle from Baton Rouge for once.

So all is as it should be, as we tap-dance around the topic of the odds and the game itself.  We applaud those who are making it close in the line – LSU’s giving 5.5 – and hope it really is the tremendous game many are expecting.  Our personal feeling is that Clemson will need to look a lot better than they did edging out Ohio State to make it a really great game.   Not that they can’t do that; and if anyone can jaw them into it, it would be that inspirational fast-talker Dabo Swinney, to whom all the credit in the world.

The Palmetto Tigers bring all kinds of talent.  LSU’s specialty this season, especially in about the last 8 games, has been hyper-preparedness for whatever super-weapons the other team toted in.  I’d be surprised if the Aranda D wasn’t ready for Clemson’s Travis Etienne and his steel-piston legs, even with its solid-B+ D-line.  The sheer diligence of preparation has been notable this year.  The LSU secondary is top-notch.

Taking nothing away from Trevor Lawrence, meanwhile, Joe “Preternatural Instincts” Burrow of the SEC has hacked out his amazing season playing against the best defenses in FBS ball.  That’s not what the ACC’s Clemson does for a living.  That said, Lawrence is good.  He’ll pull those rabbits out of hats if you take your eye off him for a nanosecond.  (Although who could, with all that yellow hair flopping around.)

We hope for fewer interludes than in the semis with players rolling around on the turf nursing injuries.  That seems to be getting a little out of hand.  Stop it, already.  We just can’t decide right now if it’s going to be an awesome game, or a rout.

But that’s the fun of the funny-bouncing pigskin; you never know what you’ll get.

Best of luck to both teams.  But we’ll leave our Inner Circle with a heartfelt … Geaux Tigers!! 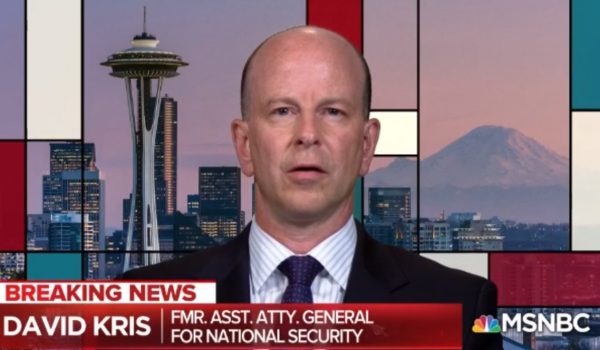