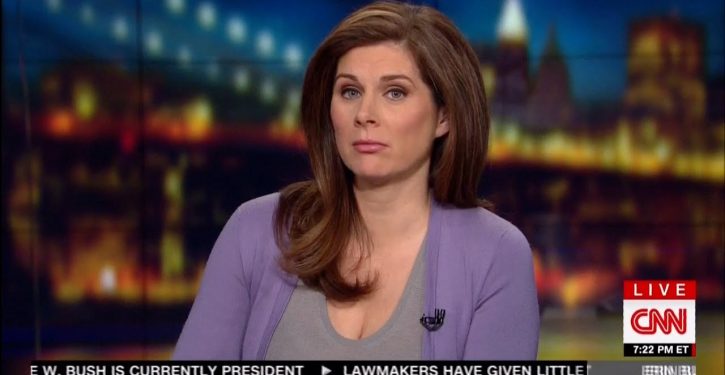 CNN anchor Erin Burnett said Thursday night that Iranian chants of “death to America” might not actually be “seriously meant.”

Burnett made the remark while interviewing Republican Ohio Rep. Mike Turner, who brought up that “Iran itself continues to have even its entire parliament chant death to America.”

“I will say, I will say, I was in Tehran when they were chanting ‘Death to America’ once. I was at a rally, the people couldn’t have been any friendlier to me personally as an American. It sort of felt like a thing and a trope, as opposed to anything that actually was seriously meant and considered,” Burnett replied. “I understand your point, but having been there my experience was quite different.”

Turner shot back that “pretty much your entire life, Iran has chanted ‘Death to America,’ and they have taken actions against Americans, American interests, in ways that are lethal — killing Americans, giving weaponry to people who have intentioned and do kill Americans.” (RELATED: MSNBC Airs Baseless Iranian Propaganda About Dead US Soldiers)

“So it’s not just a slogan,” Turner continued. “This obviously is something that Iran has systematically continued to do, it’s part of their seeking weapons of mass destruction, in their claim to want to wipe Israel off the face of the earth.”

Burnett wasn’t the only news anchor to make eyebrow-raising statements about Iran.

She added that it “seems President [Donald] Trump did what the Iranian government has been unable to do — unite the country.”