Democratic presidential candidate Joe Biden said that learning English would be a requirement to legalize the country’s illegal alien population, but that detail is not included on his official immigration platform.

Speaking Sunday at a campaign event in Iowa, Biden told an audience that he would create a pathway to citizenship for the county’s estimated 11 million illegal aliens. The former vice president said that, among other conditions, they would have to learn English as part of their naturalization process.

“In matter of months, if I’m elected president, a pathway to citizenship for the 11 million undocumented. Like every other person who’s come here, they have to pass — they have to learn how to speak English, they have to demonstrate they pay their taxes, just go down the line,” Biden said.

However, the former vice president unveiled a comprehensive immigration agenda in December that made no mention of this requirement.

A spokesperson for the campaign addressed the noted discrepancy. “The verbal portion of the naturalization exam is administered in English (except for in very select cases) and our plan offers English language education support,” a Biden campaign official said when approached by Politico.

Biden — who has already established himself as more moderate on immigration issues compared to many of his primary adversaries — attracted criticism from the Left for the proposal on English proficiency.

“It’s time we dispel the notion of good and bad immigrants based on their ability to speak English,” said Sawyer Hackett, a communications director for Julian Castro’s now-defunct presidential campaign, Monday.

Castro dropped out of the presidential contest earlier in January after failing to gain traction in the polls. The former San Antonio mayor and Housing and Urban Development secretary was credited with having pushed other Democratic presidential candidates further to the left on immigration issues.

“The way forward on immigration — and the way to beat Trump — is through inclusive, people-first policy. Emphasizing English as a prerequisite is an outdated idea that all of our candidates should be beyond,” Indivisible Guide, a Washington, D.C.,-based progressive organization, said Monday in response to Biden’s comments.

This is not the first time Biden has been attacked from the Left for his comparatively moderate immigration positions.

The former vice president has attracted protests from immigration-rights activists who demand he apologize for the roughly three million deportations that took place during the Obama administration, sparred with a voter concerned about his deportation record, and saw his top Latina adviser quit his campaign over a purported lack of empathy in his immigration rhetoric.

Biden, nevertheless, has pledged to end some of President Donald Trump’s most effective border programs, such as the Remain in Mexico directive. The Democratic front-runner has also pledged to reinstate DACA, raise the current refugee cap to nearly seven times the current limit, and reprioritize deportations.

Which Democrat had the dumbest reaction to Trump’s eliminating Soleimani?
Next Post
Cartoon bonus: A hole in one 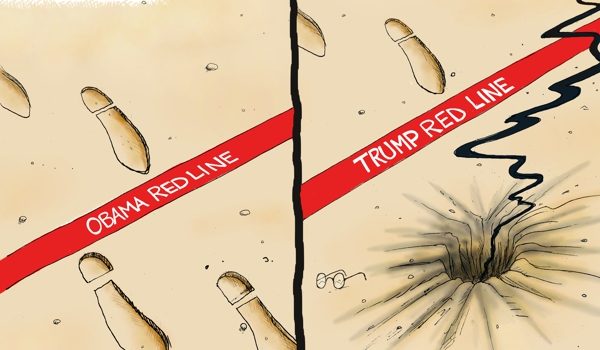