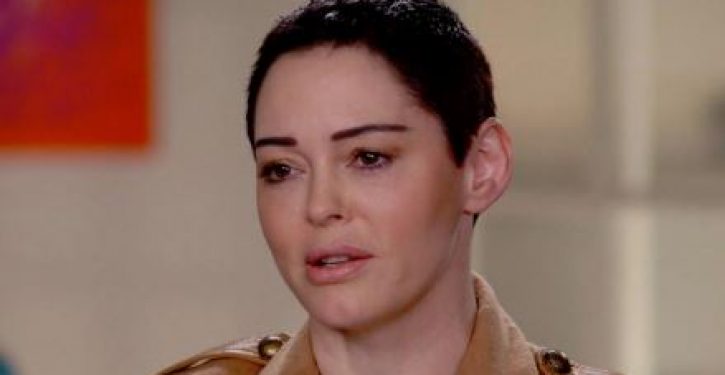 Rose McGowan, best known for her role in the series “Charmed,” was anything but charming when she tweeted a “Dear Iran” letter excoriating America as the true “terrorist regime.”

Soleimani has been linked to the killing of hundreds of Americans troops.

McGowan saw fit to apologize for his death – putting her squarely on the side of terrorists – while accusing the Trump administration of being the actual terrorists.

“Dear Iran,” she wrote. “The USA has disrespected your country, your flag, your people. 52% of us humbly apologize. We want peace with your nation.”

“We are being held hostage by a terrorist regime,” McGowan added. “We do not know how to escape. Please do not kill us.”

Dear #Iran, The USA has disrespected your country, your flag, your people. 52% of us humbly apologize. We want peace with your nation. We are being held hostage by a terrorist regime. We do not know how to escape. Please do not kill us. #Soleimani pic.twitter.com/YE54CqGCdr

McGowan isn’t exactly an anomaly here. The Left truly is siding with terrorists in Iran, due almost exclusively to their hatred of Donald Trump.

Sen. Ed Markey (D-Mass.) defined the operation as an “assassination” and claimed the president “put the lives of every person in the region … at immediate risk.”

Rep. Ilhan Omar (D-Minn.) vowed to stop – not Iran and their band of terrorists – but the President of the United States.

Trump in full fascist 101 mode-,steal and lie – untill there’s nothing left and start a war –
He’s so idiotic he doesn’t know he just attacked Iran
And that’s not like anywhere else

McGowan got hammered so hard that a trend started on Twitter in response to her “Dear Iran” message.

“Dear Rose” almost immediately caught fire on social media, and some of the responses were brutal.

Dear Rose McGowan,
You can “escape” the USA, you treasonous psycho, by immediately moving to Iran. https://t.co/VbbujqDpa4

Hey Rose, If Iran is so great, you should go hang out there in the EXACT OUTFIT you're wearing in your profile picture and let us all know how it goes.

It’s interesting to note that McGowan, a principal force behind the #MeToo movement, is now siding with a regime wrought with human rights violations against their own people, particularly women.

When your hatred of President Trump is so dark and unhinged that you side with terrorists, it’s time to seek help.