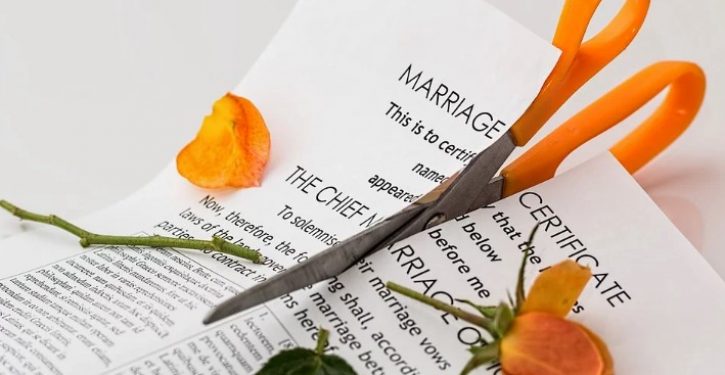 But the reason for divorce given by a woman named Jennifer Merrill is one for the ages. Her story, which appears in an article at Voice of America, carries the headline “I Might Still Be Married if Trump Wasn’t President.”

Merrill explains that she had been vexed for years over her husband’s “steady shift to the political right” and that  the election of Trump was merely the last straw. But it was one ginormous straw:

I just couldn’t see sharing a bed with somebody that agreed with what Trump was doing when I was so against everything that Trump represented. He had no sensitivity for how I felt, that I felt so strongly about it, especially when I was going out and doing protests … and he would just laugh about it and continue to defend [Trump]. So that just made me very, very angry.

Clearly, it was not just hubby’s support of Trump that was a bone of contention but Merrill’s own far left tendencies. A photo of her in the VOA article shows her standing outside the Capitol holding aloft a sign that reads “New Green Deal.”

The sad part of the story is that Merrill is the mother of three children, who are now products of a broken home. Even sadder is the prospect that she will attempt to indoctrinate them ideologically.

Look who’s talking: Dems tell Trump to ‘do something new, read the Constitution’
Next Post
The ‘but I would vote for Joe Biden’ Republicans