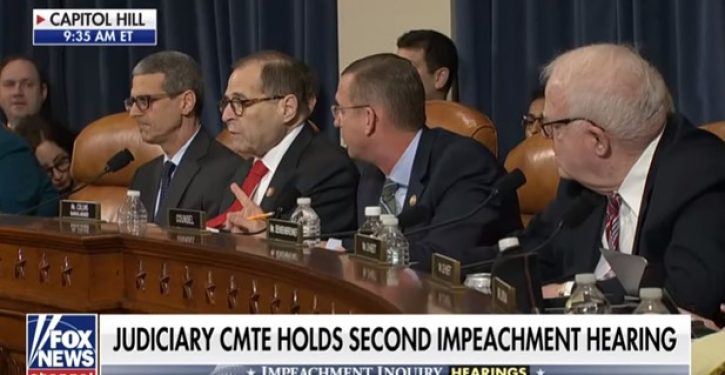 Americans weary of the impeachment drama the Democrats have fabricated got an extra helping of ennui yesterday. The marathon he-said-she-said session was the longest so far in either of the House committees that have conducted them, running from early morning into early evening. Like all the other installments to date, this one was sorely lacking in fact but rich in opinionating and speechifying.

Yesterday’s testimony had a unique twist. The key “witnesses” were the two attorneys — Daniel Goldman and Stephen Castor — who had served as interrogators respectively for the Democrats and Republicans during the Intel Committee hearings.

I get Jerrold Nadler’s motivation for having committee members question the questioners. Having the two men testify about what they heard was an effort to introduce “evidence” from the first round of hearings into the current one. But since neither attorney has any firsthand knowledge of the now-infamous July 25 phone call beyond the transcript, featuring them as surrogate witnesses was another exercise in futility.

Yesterday’s hearings were also marked a few tense moments when tempers flared. One came when Rep. Andy Biggs (R-Ariz.) reminded Chairman Jerrold Nadler that House rules require the scheduling of a day of minority hearings “at a reasonable time.” He went on to define reasonable time in this particular case as “not after articles have been drawn, not after there’s been a vote on articles of impeachment.”

As happened repeatedly throughout the day’s hearings, Nadler dismissed the demand as “not a proper point of order,” adding that if Biggs saw the chairman’s failure to address his demand as a violation of House rules, his grievance could be taken up in a meeting “where we consider such articles.” In other words, nothing doing.

At this point all hell broke loose. Minority member after member, beginning with ranking member Doug Collins (R-Ga.), raised objections to Nadler’s handling of the demand only to be told by him that there is nothing to object to. Watch:

The Democrats have done everything within their power to exclude Republicans, from staging hearings behind closed doors to controlling which witnesses Republicans could call to acts of petty officiousness like this one. It’s almost as though they have lost sight of the fact Republicans will control the bully pulpit if their insidious plans go forward.