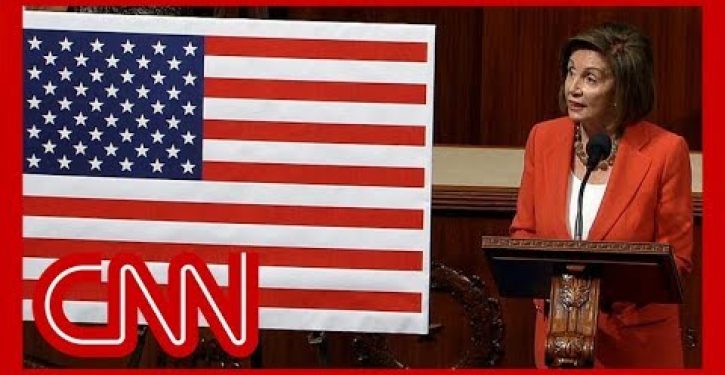 What for me has been one of the most stomach-turning aspects of the Democrats’ impeachment fiasco has been the party’s sudden discovery of their own deep and abiding love for America. This was nowhere better embodied than in Speaker Nancy Pelosi’s official announcement on Thursday that the Democrats would be moving forward with articles of impeachment, delivered in front of a profusion of American flags.

Pelosi’s words picked up on that theme, mentioning the founders, the Constitution, James Madison, the Federalist papers, and more. It went on and on in this vein. If it weren’t for that familiar droning voice and the occasional verbal stumble, you might think you were listening to the words of an originalist.

Hypocrisy of this magnitude is hard to take. Where was Pelosi’s love of country when the last president made a public issue of his refusal to wear an American flag lapel pin or place his hand over his heart during the playing of the national anthem? Where was her shock and horror when protesters chanted “F*ck yo flag” while standing above a burning American flag? Why is there no record of Pelosi’s pique when a statue of Thomas Jefferson — author of the Declaration of Independence, which she quotes at the beginning of her announcement — was defiled on his birthday in 2018 with graffiti reading “racist + rapist”? Why has Pelosi not expressed her disapproval of the absence of the Stars and Stripes on the stage at any of the Democratic debates held so far?

Pelosi and her fellow Dems are free to pursue their misguided crusade to overturn the results of the 2016 election. They can even follow the advice of one of their own, Rep. Al Green (D-Texas), who yesterday reminded his colleagues that there is “no limit” to the number of times they can impeach the president.

I for one would just prefer that they drop the pretense of patriotism and perform their silly morality play as the America haters they are.