Capone, once dubbed by the American media as “Public Enemy No. 1” is known for a variety of high-level and violent crimes, including the Saint Valentine’s Day Massacre, in which seven gang rivals were murdered in broad daylight.

Omar sees a striking similarity between Trump and Capone.

“I’ve used examples where you’ve had mob bosses who have committed atrocity after atrocity, have violated our criminal codes of conduct, and we got them on one narrow case,” she told MSNBC’s Ari Melber, “but they get to serve time.”

When Melber explained that she was connecting the dots between the president and Capone, Omar responded in the affirmative.

While being a member of the Squad means you have to speak in hyperbolic terms with no bearing on reality, we’d love to know what “atrocities” Omar believes the president has committed.

In the context of the current news cycle, Omar could be speaking only about the current impeachment push, which has its roots in Trump asking the Ukrainian president to investigate corruption in his country. That, of course, falls well short of an atrocity, much less a high crime and misdemeanor.

“What’s important right now is that for this particular president, that we know has many cases where we can impeach him on, that we focus on the one that the public is paying attention to and impeach him on that,” Omar said without evidence.

First, Democrats are rapidly losing public support for their impeachment sham. Second, there isn’t a single “case” that Democrats can find a legitimate reason to impeach the president, least of all this Ukraine hoax.

And finally, self-awareness isn’t Omar’s strong point, since she is currently being investigated on multiple fronts for allegations of tax fraud, marriage fraud, immigration fraud, and campaign finance violations.

The only atrocity in this conversation, the only person akin to a mobster, is Omar herself.

Thinks the American People Are Too Dumb to Understand

Omar went on to suggest that the American people need to be educated on why the resistance party is right to pursue the impeachment of Trump.

“You have to remember, right, this began in a way for us to give the public an opportunity to understand and move along in this process with us,” Omar said. “And as we go into the second phase, they will get to do that more.”

The public understands what you’re doing. Engaging in a farcical ploy to overturn the 2016 election. We get it.

Raise your hand if you found yesterday’s impeachment hearing to be racist
Next Post
Cartoon of the Day: Cracking up 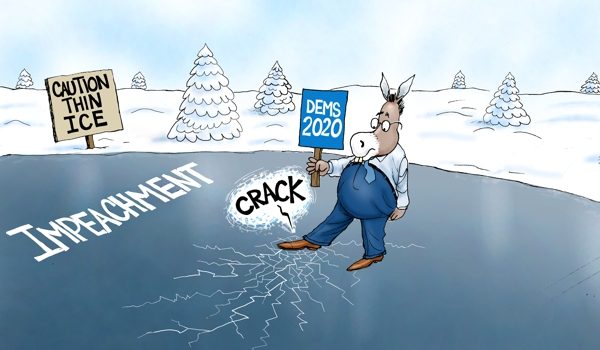