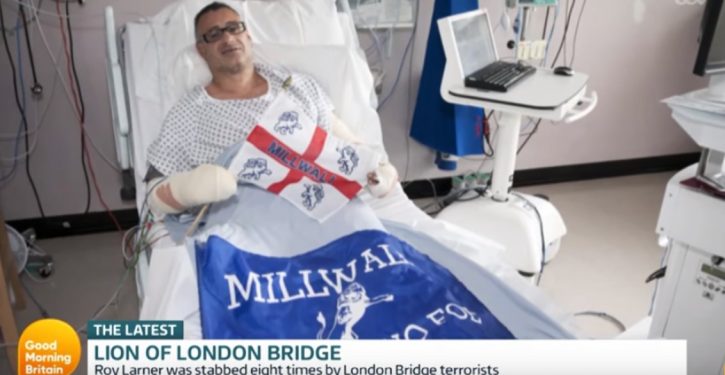 In the hours since a paroled terrorist plotter launched knife attacks on London Bridge on Friday, killing two people and injuring several more, a July 2019 report from Luke Rosiak of the Daily Caller News Foundation has surged in popularity.

Rosiak’s article recounted the fate of Roy Larner, a civilian who became a national hero for fighting back against the London Bridge terrorist assault mounted in June of 2017.  That attack saw dozens of people injured, with seven dead.  In Rosiak’s summary, “Larner became known as the ‘Lion of London Bridge’ after three Jihadis in a van plowed into a crowd of people on London Bridge before stalking from building to building, killing seven people and eventually reaching the Black and Blue pub where Larner was drinking with friends.”

When the terrorists entered the Black and Blue pub, writes Rosiak, Larner “fought them off with his bare fists, sustaining serious stab wounds all over his body but allowing dozens of other patrons to escape.”

Larner’s actions may have been especially impressive because – as reported by Jonah Bennett in a DCNF article from 2017 (link above) – eyewitnesses to the attacks “said that community police officers fled from Borough Market in London after seeing two men with knives stabbing people as part of a terror attack Saturday.”

The authorities were more proactive about approaching Mr. Larner, however.  In his July 2019 article, Rosiak explained that Larner had been “added to a terrorist watchlist know as Britain’s ‘Prevent’ program after fears he could become an anti-Islam extremist.”

According to Rosiak, Larner told the UK Sun, “They treat me like a terrorist but I’m not political at all.”

“The Sun,” said Rosiak, “reported he was added because people in the ‘far right’ who were anti-Islam had contacted Roy because of his role stopping the terrorist incident.”

In addition to being put on the watchlist, Larner was required “by British authorities to attend ‘de-radicalization’ classes ‘over fears he may become extremist’ after being stabbed eight times.”  (Admittedly, in Rosiak’s account, it appears that Larner was heard to use expletives when referring to Islamist terrorists.)

Observers might be pardoned for thinking this seems a bit one-sided, considering that one of the 2017 attackers was a “known wolf” associate of Islamist radical Anjem Choudhary, and had previously appeared – waving the “black flag of jihad” – in videos posted by Choudhary to incite Islamist hatred and extremism.  In spite of this history, the attacker was on the streets, seemingly unwatched and able to participate in bringing the 2017 attack off.

The 2017 attackers followed instructions for committing terrorist mayhem published by ISIS back in November 2016, in fact.

One of the terrorists, also an associate of Choudhary, had been living on public benefits, including public housing.

It’s not clear what, if anything, the police were doing to track these associates of Islamist extremists who lived on public benefits and probably viewed and shared the ISIS terror instructions published months before the June 2017 attack.

But at least the authorities intervened with Roy Larner to prevent him from being “radicalized” against Islam by the experience of being stabbed repeatedly during a terror assault in a pub.

The interesting priorities of the London Metropolitan Police Commissioner after the 2017 attack may illuminate what the authorities were thinking.  Commissioner Cressida Dick noted how gratifying it was that the pool of victims – seven of whom died of their wounds – was so “diverse.”

Howard Portnoy reported on the focus of Dick’s public comments at the time, citing quotes from her:

It’s desperately sad and poignant but among those who died is someone who’s British, there are French, Australian, Canadian, Spanish. …

We believe of course that that’s what makes our city so great. It’s a place where the vast majority of time it’s incredibly integrated and that diversity gives us strength. [Emphasis added]

In light of these sentiments, it may not seem that surprising that the attacker this past Friday, Usman Khan, was not just a “known wolf” but a convicted Islamist terror plotter who had been released on parole in 2018 after serving eight years of his 16-year prison sentence.

Khan was wearing an electronic tracking device.  National Public Radio provided these details on Khan:  “Although he had originally been sentenced to prison for public protection — an indefinite term until a parole board decided he was no longer a threat — his sentence was revised in 2013 to 16 years with an eight-year minimum, The Guardian reported.”

The New York Post reported that on Friday, “he went berserk with two long knives after speaking about his own ‘rehabilitation’ during a Cambridge University-sponsored criminal justice conference in London.”

Unlike Khan’s case, there are no reports that Roy Larner has gone berserk or attacked anyone with a knife.  Perhaps that’s because some people take to their deradicalization training more readily than others.  If the men who subdued Usman Khan with a narwhal tusk and portable fire extinguishers are required to submit in their turn to deradicalization classes, we can hope they do as well as Mr. Larner. 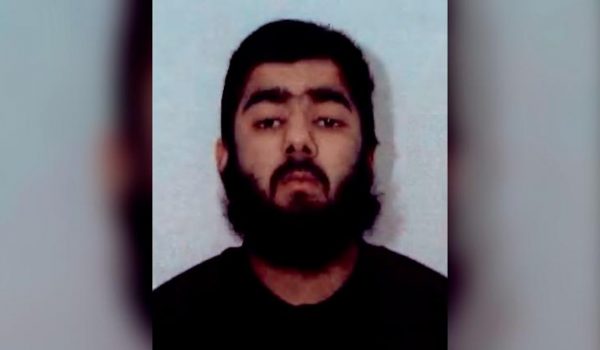