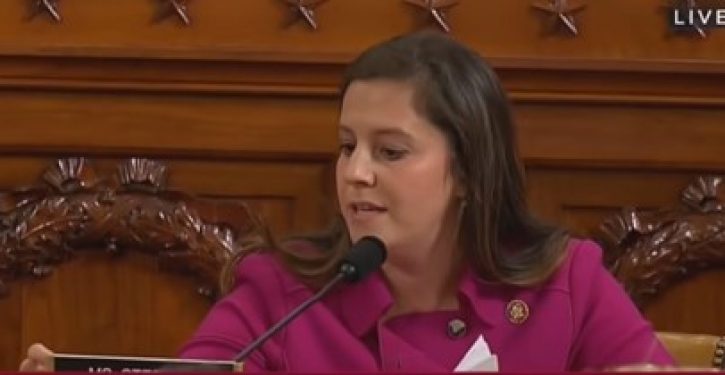 You could tell that Rep. Elise Stefanek (R-N.Y.) was getting under Democrats’ skin at the impeachment hearings. When she attempted to establish a point of order at the outset of former Ukraine Ambassador Marie Yovanovitch’s testimony, Chairman Adam Schiff cut her off. It would have been nothing of Schiff’s nose to allow the congresswoman to have the floor for a few minutes — it might even have helped dispel the impression that the Democrats have no interest in running a fair, non-partisan hearing.

Next came an unfortunate tweet by ABC’s Matthew Dowd, who tweeted: 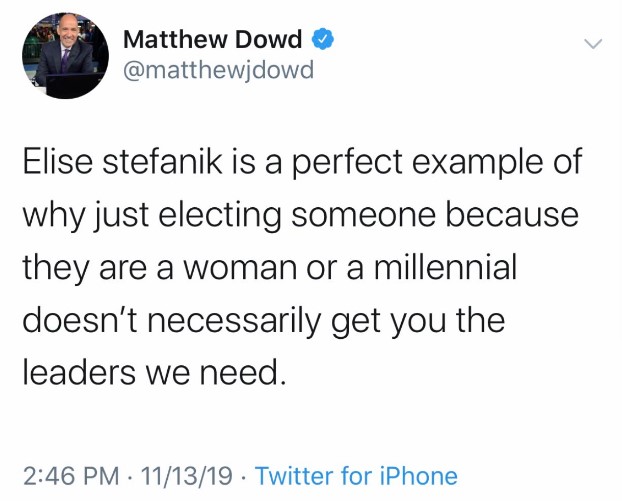 Realizing the tweet was precisely the embodiment of a sentiment the Left likes to pretend typifies those on the Right, Dowd deleted the tweet, but not its memory, which lives on in the archived form displayed above.

Then came an assault on Stefanik by George Conway, the embarrassing husband of Trump adviser Kellyanne Conway, called her “lying trash” in a series of tweets that also revealed he was donating to Stefanik’s opponent.

.@EliseStefanik is lying trash. Please give to her opponent, @TedraCobb. https://t.co/NDstzv2Qgr

So, was the Left done venting its outrage at a woman whose only crime has been asking shrewd questions of Democrats’ witnesses, making it more difficult for the party to realize its impeachment fantasies? Not by a longshot. Someone by the name of Brian J. O’Malley posted the following tweet, which went viral before it was retracted, with the poster’s apology: 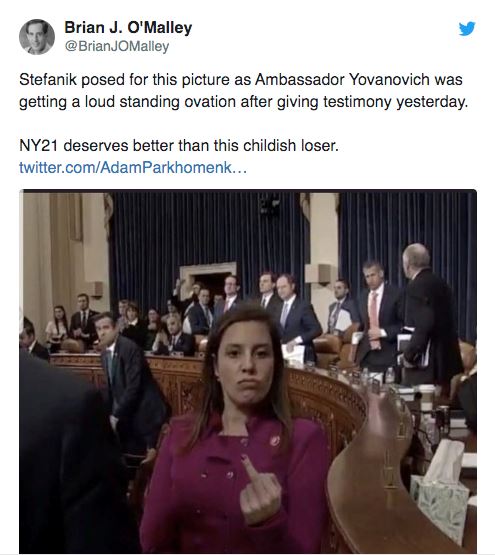 As you can see, it’s a badly photoshopped image, so naturally liberals saw right through it, right? Nope.

Sullen pout on #Stefanik's face. #NewYorkers, you can obviously do better.

An unnecessary dialogue ensued, with Democrats clinging to the fantasy that they had captured the young congresswoman making an obscene gesture.

But ultimately the counter-evidence was simply too strong.

Then explain why Stefanik’s finger has nail polish in that photo when she wasn’t wearing any yesterday @BrianJOMalley pic.twitter.com/sShkRubLf4

Here is original image of Stefanik that was doctored.
I’m deleting the doctored one now that the verification request was answered.
Her facial expression is real, the finger you will see in fake is not.
Memes can be fun, but they can also be weaponized.
Only clean fights, folks. https://t.co/IcWV6kYCs0

If Democrats hunger for obscenities among young members of Congress, they’ll simply have to rely on Rashida “Impeach the motherf*cker” Tlaib and company.

Paul Krugman: Always wrong, never in doubt
Next Post
I’m sorry, is impeachment not entertaining enough for you?