If there’s any question which party the New York Times is shilling for, the Gray Lady’s recent history of “corrections” should clarify the point. Since Donald Trump’s inauguration, the paper has demonstrated a proclivity for publishing out-and-out lies designed to make him or his party look bad, then publishing a “correction” afterwards to “set the record straight.” The entire process could be circumvented by the Times’s deciding to report the news accurately in the first place, but that would not advance the narrative the paper prefers. (RELATED: The problem nowadays with ‘corrections’ in the NYT, WaPo, etc.)

Sometimes, its editors don’t even bother with corrections. Instead they rewrite a story to change its journalistic focus without bothering to include a notice of update or retraction. Such is the case with a story published Oct. 18 that reported Hillary Clinton’s outrageous claim that the Russians were grooming presidential hopeful Tulsi Gabbard to ran as a third-party candidate. Here are the opening two paragraphs: 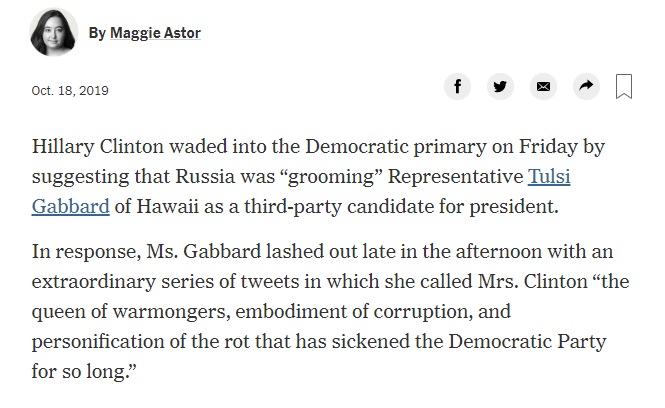 The Times’s purpose in running the story was to damage Gabbard, whose views are too centrist for the paper’s taste. Inadvertently, however, the article instead did harm to the reputation of Clinton, whose assertion was dismissed even by commenters on the Left as so much lunatic raving. The Times holds no brief for Clinton, so the decision was made to change the opening paragraph of the article, which now reads: 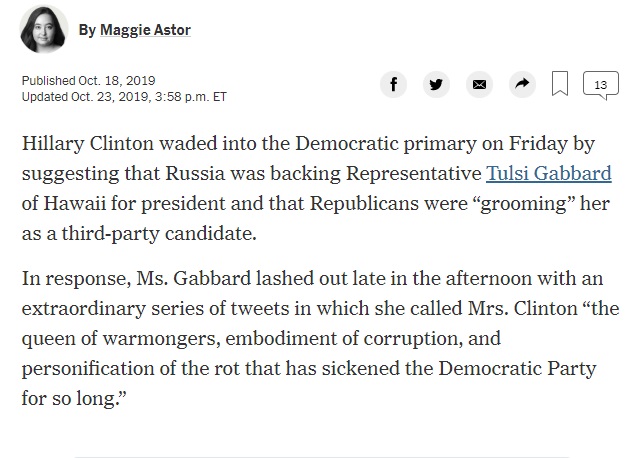 Notice that the phrase Russia was “grooming” has been changed to Republicans were “grooming.”

In 2017, CNN — which is itself guilty of tilting the news to the left and therefore has little room to talk — called out the Times for editorial that claimed an obvious connection between Sarah Palin’s Facebook map and the Tucson shooting. The Times’s editorial page editor, James Bennet, thanked CNN in a statement, adding that “while it’s always agonizing to get something wrong we appreciate it when our readers call us out like this. We made an error of fact in the editorial, and we’ve corrected it. But that error doesn’t undercut or weaken the argument of the piece.” 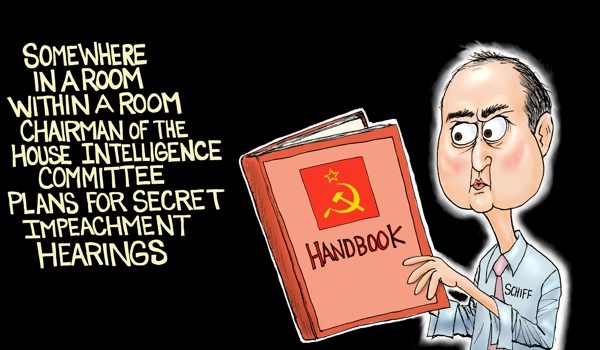