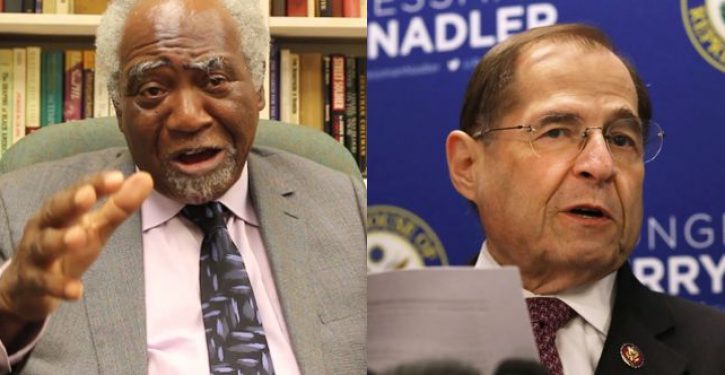 As LU’s Ben Bowles wrote yesterday, Donald Trump’s metaphorical reference to the House Democrats’ incredibly partisan impeachment inquiry as a lynching brought an avalanche of condemnation down on the president for his “racial insensitivity.” Black Illinois Rep. Danny K. Davis tweeted “The highest officeholder should think about these words. The rural south where I was born has a tarnished and painful history.” Another black congressman, Gregory W. Meeks of New York, added his two cents, tweeting “I don’t expect Trump to be sensitive to the weight of that word, or see how insulting and hurtful it is to invoke it here.”

What is remarkable about these reactions by Davis and Meeks is that both men in 1998 referred to the Clinton impeachment proceedings as a “lynching.” And, mind you, unlike the current circus, these proceedings were carried out jointly by both parties and in full view of the American people.

Davis and Meeks weren’t alone in calling the Clinton impeachment a lynching. Then-Rep. Jim McDermott (D-Wash.) said of the proceedings during an interview with the Baltimore Sun on Sept. 12, 1998, “This feels today like we’re taking a step down the road to becoming a political lynch mob.” But  McDermott didn’t stop there. Instead he fully fleshed out the metaphor, adding, “Find the rope, find the tree and ask a bunch of questions later.”

But the pièce de résistance when it comes to the Left’s hypocrisy finds expression in two more quotes about the Clinton impeachment:

These two quotes were said in the order presented respectively by present-day Trump inquisitor Rep. Jerrold Nadler and — wait for it — presidential hopeful Joe Biden. Here’s a video of the latter:

Good job, everyone in the media, for spending the day hyperventilating over Trump’s use of “lynching” to describe impeachment.

A tiny bit of research would have led to this – Joe Biden saying the exact same thing on Clinton impeachment.

Some have argued (fatuously in the opinion of this writer) that, as with the n-word, it’s permissible to use the word lynching to pertain to a political predicament if you are a descendant of slaves. An article at Roll Call emphasizes that Virginia Lt. Gov. Justin  Fairfax “alluded to lynchings after he was accused of sexual assault,” adding that “Fairfax is the descendant of slaves in Virginia.” But Jim McDermott, Jerrold Nadler, and Joe Biden, all of whom are white, can’t make that claim. Why weren’t the media and other Democrats as furious at them for their blatant racism in 1998 as they are at Donald Trump for his in 2019? Could we be dealing once again with one of the Democrats’ famous double standards?

Yes, there’s a deep state, but it’s all cool because they mean well
Next Post
Susan Rice calls Lindsey Graham ‘a piece of sh*t’