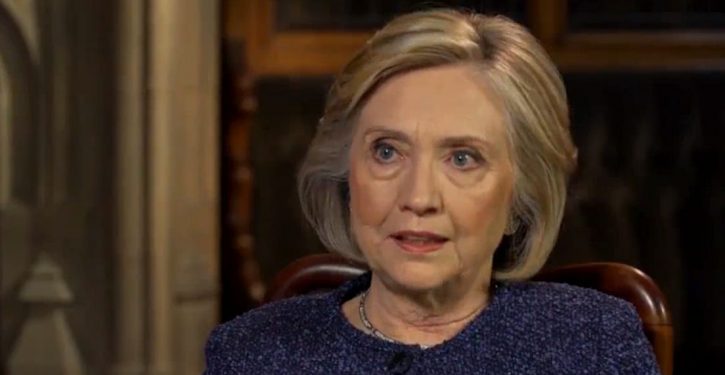 It’s tempting to assume Hillary Clinton has simply lost her mind.  Apparently she didn’t just toss off, unthinkingly, her allegation this past week that Hawaii Democrat Tulsi Gabbard is a “Russian asset.”  In the face of widespread criticism, a Clinton aide, Nick Merrill, doubled down on Hillary’s claim afterward.

Says the Washington Examiner: “Nick Merrill was asked to clarify comments Clinton made on a Thursday episode of the Campaign HQ podcast hosted by [one-time Obama aide] David Plouffe … Clinton said that a ‘Russian asset’ was running in the Democratic primary for president and would run third-party in the general election to help reelect President Trump.”

The Washington Examiner goes on to quote Merrill: “If the nesting doll fits … This is not some outlandish claim. This is reality. If the Russian propaganda machine, both their state media and their bot and troll operations, is backing a candidate aligned with their interests, that is just a reality, it is not speculation.”

National Review’s Jim Geraghty notes that Clinton also identified 2016 Green Party candidate Jill Stein as a Russian asset.  Geraghty would like to see Hillary “put up or shut up” on these allegations.

“This is bonkers,” says Geraghty. He goes on, “Gabbard’s foreign policy views may well be wrongheaded ones. But she’s direct and honest about them, and it’s highly unlikely that she’s been bribed, brainwashed or coerced into these positions.”

The same can be said of Jill Stein.  I imagine Geraghty would agree with me on that.  He doesn’t spend time on Jill Stein’s thinking and motives, but he does give considerable treatment to his perception of Gabbard’s – which, again, may be wrongheaded, but which he thinks are honestly arrived at.

I think the same: that Gabbard has arrived at her positions honestly.  I affirm that up-front, because it is also correct to say that on global security policy matters, especially as regards U.S. engagement in the Middle East, her positions are a pretty faithful echo of those articulated by Russian media outlets (e.g., RT, the popular geopolitics blog Southfront).

But the point is that that doesn’t mean anyone, including Gabbard, is a bought-and-paid-for asset of the Russian government.

Something that point means, in turn, is that one can understand the perspective of Russian strategists, and even sympathize with some aspects of it, without having sold out to Putin or any other Russian cabal.  This is called exercising mental capacity and performing analysis.  The Russians don’t live in our neighborhood, and they didn’t grow up the way we did.   That doesn’t mean, when they see things in ways we wouldn’t, that their leadership is a pack of demons.

We have profound differences with Russia, although we also have some interests in common.  To acknowledge those simultaneous realities is to be realistic, not a fifth-column sneak.

How odd to have to say something so basic and obvious, while high-profile figures and the media are off batting around intemperate claims about individual politicians being “Russian assets.”

I can’t say what’s in Hillary’s mind.  I can say, however, that there appear to be two major consequences looming from her bizarre “Tulsi’s a Russian asset” theme.

One is this: it will quickly dawn on anyone who isn’t Trump-deranged that this is the same claim Hillary paid her agents in 2016 to make about Donald Trump.  In terms of Trump’s positions on geopolitical matters, vis-à-vis the claim that he was Russia’s “asset,” the claim had even less foundation during that campaign (and since, for that matter).

Gabbard’s positions on Syria, Assad, Iraq, and U.S. engagement in the Middle East do overlay Russia’s closely, as those positions are expressed by state media outlets and Russian foreign ministry statements.  Trump’s never have.  Now and then, when they do overlay a Russian position closely, they cause natural consternation from both sides of the American political aisle.  This doesn’t occur nearly as often as the mainstream media suggest it does.  (When it does happen, it tends to be inexplicably egregious.)

Hillary going after Gabbard with a “Russian asset” charge highlights how cynical and underhanded it was to do the same thing in 2016 to Trump.  President Trump’s positions on security politics, like candidate Trump’s, can certainly come in for fair criticism.  But that doesn’t make him a Russian asset, any more than it makes Tulsi Gabbard or Jill Stein one.

As if she is driven to it and can’t help herself, Hillary Clinton is busy, right this minute, slaying the central premise of her own anti-Trump meme.  She’s showing it up for the inane, conspiracist bigotry it is: to insist that having thoughts and policy positions that can be associated with someone else makes you that someone’s “asset,” or puppet.

One always had to have a prior belief in that premise to give credence to the ridiculous allegations of the Steele dossier.  The details written into the dossier didn’t offer proof of anything, except in the context of that unexamined premise of Trump as a “Russian asset.”  Now, in Gabbard, Hillary has found the magic target whom others will defend against such an unsupported smear.  It is being neutralized before our eyes; suddenly, it’s what it always was: over the top, too much, a gratuitously ad hominem leap into illogic.

The second consequence was alluded to in an article at the New York Post on Saturday, which reports that Hillary Clinton has backed out of a Fortune women’s conference in Washington, D.C., where she and Tulsi Gabbard had both been scheduled to appear.

Naturally, NY Post takes a swipe at Hillary for “blinking”; i.e., not wanting to confront Gabbard directly.  But the more profound effect of Hillary’s gambit is that it is making it easier for the Democratic Party to begin distancing itself from her — and, indeed, implicitly from what Hillary represents.

Some candidates are doing that.  Says the Post: “Fellow presidential candidates were divided. … [T]ech entrepreneur Andrew Yang and author Marianne Williamson came to Gabbard’s defense, ‘The Democratic establishment has got to stop smearing women it finds inconvenient!’ said Williamson.”

Whereas, the Post continues, “Top tier contenders, however, like Joe Biden and Elizabeth Warren, stayed out of the fray.”

Left-wing activist and CNN commentator Van Jones joined the critics, warning that Hillary is playing “a very dangerous game … If you’re concerned about disinformation … that is what just happened, just throw out some information, disinformation, smear somebody.”

Jones called Clinton “a legend.  She’s going to be in the history books.”  But he went on to say that she is “playing right into the Russians’ hands.”

There are plenty of Democrats who won’t miss the significant information from this episode: that “top tier contenders” like Biden and Warren made no effort to defend Gabbard against the unfair attack, and seemed tacitly to be OK with it.  It was fringe-polling outsiders Yang and Williamson who took up the cudgels for Gabbard.

Some Democrats may also notice the number of Republican and conservative voices speaking in Gabbard’s defense – not because they agree with her positions, but because they affirm, fairly, that she can hold them without being assumed to be a Russian stooge.

The irony here is hard to miss.  Hillary went after candidate Trump in 2016 using an attack vector the Left has for decades accused the Right of exploiting falsely: the accusation of being a Russian “asset.”  But it was Hillary who was playing it false in 2016, and she’s doing it again today.  In the end, she is exposing only herself – and her henchmen in the media who helped amplify the theme.

Under gun from balky Parliament, UK’s Johnson requests Brexit deadline extension from EU
Next Post
‘I, I, I Don’t Know’: Kamala Harris stumped by pointed question about Giuliani from Anderson Cooper 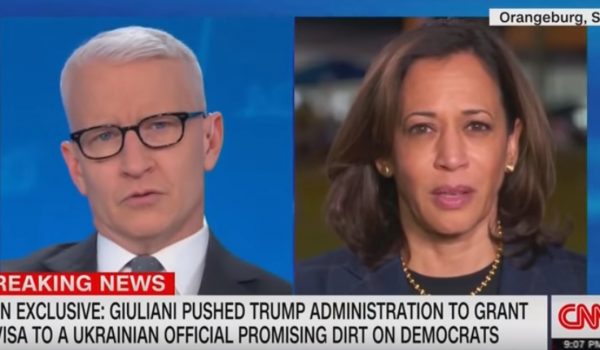