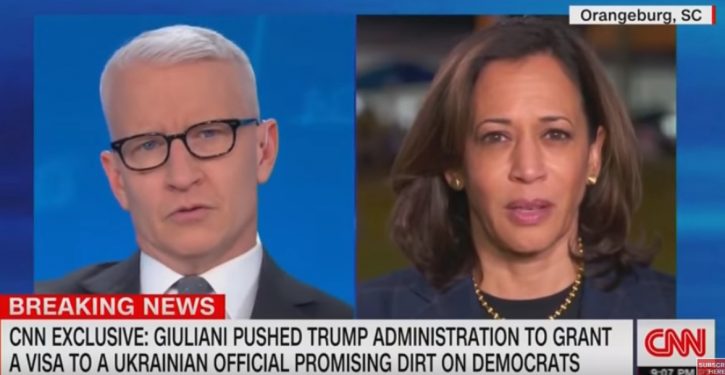 Harris spoke to Cooper on CNN’s “Anderson Cooper 360,” and the host asked Harris for her reaction to reports that Giuliani tried to override the Ukrainian embassy and State Department in an effort to get a visa for Viktor Shokin, a former Ukrainian prosecutor.

Harris said Giuliani “has clearly broken many laws,” adding that his actions are “further evidence of corruption” by the Trump administration and that they violate an “extraordinary number of rules and ethical laws.” When Cooper asked Harris what specific laws she believes Giuliani has broken, the senator seemed unable to answer directly.

“Well I, I, I don’t know,” Harris replied when Cooper asked her what specific laws she believes Giuliani has broken. (RELATED: Democrats Subpoena Giuliani Associates In Latest Move For Impeachment Inquiry)

“I think there are a number of questions to be asked, and once the facts are transparent and have been available for Congress at the very beginning to see it, I think we’ll know what laws have been broken.”

The interview follows months of controversy over a July 25 phone call between Trump and Ukrainian President Volodymyr Zelensky. An August whistleblower complaint accused the president of asking Ukrainian officials to look into former Vice President Joe Biden and his son Hunter. The complaint spurred on an official inquiry into the president by the House of Representatives.

Giuliani defied a subpoena from the House Intelligence Committee on Oct. 15 as part of the impeachment inquiry, calling it “illegitimate, unconstitutional, and baseless.”

What is Hillary Clinton doing with this ‘Russian asset’ theme about Tulsi Gabbard?
Next Post
Income inequality has soared while taxes have become less progressive … or not