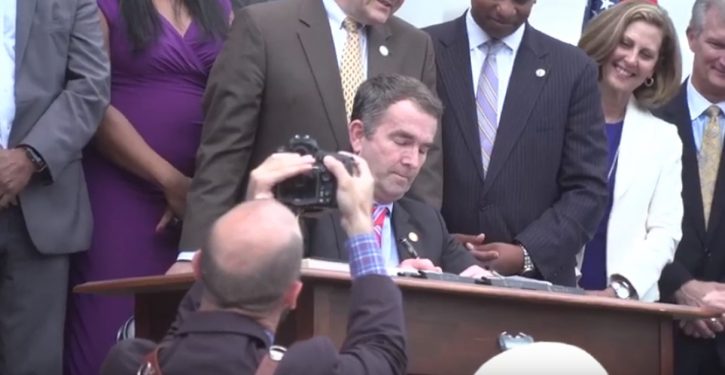 The Democratic Party is expected to take control of the Virginia legislature this November, probably by a slim margin. Democratic candidates now overwhelmingly support repealing the state’s right-to-work law, according to a recent survey. This is a big change from the past, when not just Republicans, but also many Virginia Democrats, supported the law. Several Democratic presidential candidates have called for the federal government to ban state right-to-work laws nationwide.

Repealing Virginia’s law could have a major economic impact on the state. Studies have found that states with right-to-work laws have an advantage, in job creation over other states. In fact, right to work states have double the job growth of non-right-to-work states.

When they become too powerful, unions can make unreasonable demands that drive away employers. When Amazon sought to expand into New York, where workers can be forced to pay union dues, it faced hostility and unreasonable demands from unions. Union officials sought to control who Amazon would hire and to force it to support costly projects backed by the unions. In response, Amazon terminated its plans to expand into New York.

By contrast, Amazon decided to expand in Virginia, which has long been a right-to-work state. It is expected to put at least 25,000 jobs into Virginia by 2030 — although that might change if Virginia’s business climate worsens.

The benefits of right-to-work laws in attracting jobs seem clear. They may also improve living standards. As Mark Mix noted in the Fredericksburg Free Lance-Star, “there is a strong correlation between right to work and higher real personal income. In fact, the average right to work state’s cost of living-adjusted, after-tax income per household was roughly $4,500 higher than households in states that permit forced unionism.”

Of course, correlation doesn’t necessarily prove causation. States with right-to-work laws also tend to have less red tape for businesses, and lower tax burdens. Those factors, not just right-to-work laws, help explain why the cost of living is lower in right-to-work states and why their income growth is higher.

Until recently, most Democrats in Virginia’s legislature didn’t seek to repeal the state’s right-to-work law. The ranking Democrat in the State Senate admitted in 2016 that “there has not been a problem” with the law.

But in 2019, that changed. In January, a self-described socialist, Delegate Lee Carter (D-Manassas), filed a bill to repeal the state’s right-to-work law. Carter’s bill died a speedy death in the GOP-controlled legislature. But it soon became a key part of the Democratic legislative agenda.

In September, a more senior Democratic legislator, Delegate Patrick Hope, vowed to repeal the law. “When Democrats flip the General Assembly this year,” he said, “at the very top of the progressive agenda” will be “to repeal the so-called ‘Right-to-Work'” law.

He also said it might be included as part of Governor Ralph Northam’s “racial equity” agenda. Hope claimed that the right-to-work law was “based on discrimination,” because it was passed “in 1947 during the tenure of Governor William Tuck, an avowed segregationist.”

But there is no reason to believe that the Virginia legislature had any racist motive for passing the right-to-work law. Northern states with no history of segregation passed the same right-to-work law Virginia did. Iowa and the Dakotas did so in the very same year, 1947.

The most important supporter of right-to-work laws was an outspoken opponent of racism. State right-to-work laws are specifically allowed by the 1947 federal Taft-Hartley Act. That law’s lead sponsor, Senator Robert Taft of Ohio, hated segregation. Taft was ahead of his time, in opposing racist policies, such as the federal government’s internment of the Japanese-Americans.

In wake of Mulvaney ‘slip,’ Trump campaign is brazenly selling ‘Get Over It’ t-shirts
Next Post
Re-elected: These five powerful members of Congress have figured it all out