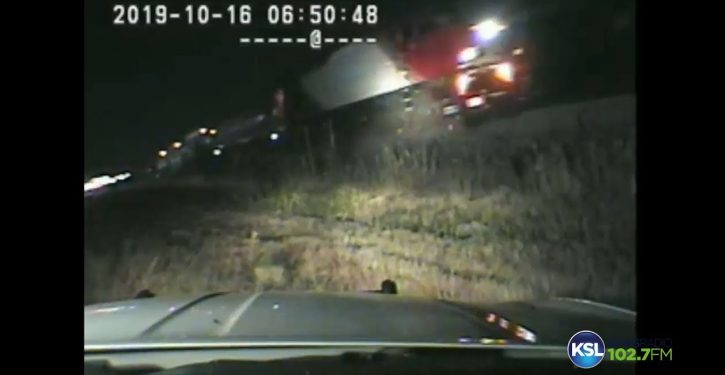 Throughout Barack Obama’s presidency, we heard story after story about how corrupt and racist the police are. In his first year in office, Obama accused the Cambridge, Mass. police of acting “stupidly” in the arrest of his pal, Henry Louis Gates, without knowing the facts.

Despite the stigma Obama attached to police, which led to the execution of several police officers, occasionally members of law enforcement can be counted on to go above and beyond the call of duty.

Such an officer is Utah Highway Patrol Trooper Ruben Correa. At 6:50 a.m. Wednesday, Correa risked his own life pulling a driver out of a car stalled on the tracks the instant before a train slammed into it, striking it right where the driver had been sitting.

According to CBS Salt Lake City affiliate KUTV, Correa scrambled up an embankment to where the motionless car sat. “I saw he was unconscious,” Correa told reporters, “so I opened his door, explained to him we got to get out. He wasn’t responding and I heard the horn from the train.”

The dash cam video that follows tells the rest of the amazing story: