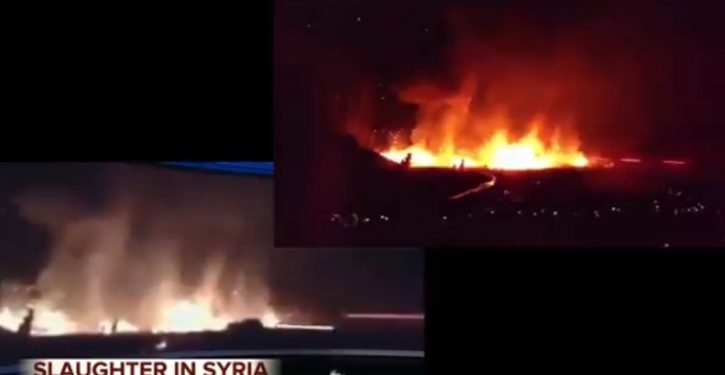 So many uses for those recycled gun-range videos. (Original, upper right); OANN video

It’s been a rough week for analysis, with most of the commentary in knee-jerk mode.  This isn’t alleviated at all by so much of the “straight news” coverage being in “Pallywood and Exaggeration: The Movie” mode.  What can you do.  Here we are.

I pause only to note that if you pointed out, a week ago, the likelihood that some of the Kurds would want to ensure survival by looking for an accord with Russia and Assad, your perspective is being vindicated.

Other than that, there’s little real-world vindication for all the various dire or sunny predictions.  Unless he has a death wish, Erdogan is basically stopped now.  See paragraph two, above.  Pushback with Russia behind it means Erdogan’s forces start taking casualties if he keeps pushing further in a wholly discretionary campaign.  This is a fight he doesn’t, strictly speaking, have to be waging.  He’s not fighting for Turkey’s survival; he’s fighting to drive a stake in Syria, in part so that Syria won’t end up being weaponized against him.

If Syria is to be weaponized – and if Erdogan has anything to say about it, Syria will be, somewhere in a hazy future – it will be on Neo-Ottoman terms, not Russia’s or Iran’s.  That’s Erdogan’s position.  But weaponizations can be delayed until timing is propitious.  Pick a century since 1453, and Ottoman Turkey, Russia, and Persia have been out in force shooting at each other, trying to get that straightened out.  Syria and Iraq have hosted their battles for quite a long time.

In the current instance, Turkey can choose to pocket small gains and wait.  Or Erdogan can court mounting casualties, an upswing in tensions with Russia, and widespread condemnation for no good reason.  The harder he pushes, the more he will be obliged to treat everything as an emergency.  That means he can’t stop running.  Inexcusable as he is, that hasn’t been his M.O.  Erdogan’s not a nihilist; he wants Turkey to actually be there, rested and in charge, for new caliphate of his vision.

As the week swings into gear, just a couple of observations.  First, Trump is sending a “high-level” negotiating team to Turkey to, we are told, negotiate a ceasefire.  A couple of hours before that, sanctions and punitive bilateral measures against Turkey were announced, including a 50% tariff increase and a halt to trade deal negotiations.

Let us all observe a solemn two-minute hate for the annoyance of this situation not fitting any of our preconceptions.  I’m the first to say it doesn’t fit mine.  That also puts me first in line to say that I can’t predict how it’s going to go.

What Trump has done here is somehow get to a situation he can at least try to negotiate on the terms he is familiar with.  Instead of having the military reality on the ground dictate his relative negotiating strength, he has removed that as a constraint on him.  Ten days ago, there were a few dozen American soldiers in a position of exceptional vulnerability on the Syrian border.  Now there aren’t.  Moreover, Russia, Assad, and the Syrian Kurds are suddenly in league against Turkey instead of jockeying against each other, and the hand of Iran in what’s going on is at the moment a secondary and compromised one at best.

I doubt the economic pressure Trump proposes to bring on Turkey would be decisive, if it were applied by itself.  But the other actors in the drama – Russia and Assad, now partnering with Kurds – are setting up a juncture at which the sanctions could potentially make the outcome of negotiations more fruitful.  All the parties want something out of a deal, and there’s still no nation other than the United States that could hope to maneuver everyone into getting something.  It has the makings of a Trump situation being set on a table, with place cards.

I leave it to readers to decide if Trump cleverly foresaw all this.  I have no strong argument either way.  As to what outcome it will produce, all we can do is wait and see.

Of course, the media can do their best to keep us from seeing clearly.  That’s the other observation: that the media have covered themselves with ignominy in this – ignominy that ought to be decisive for multiple purposes.  For those who can’t see that the severely unbalanced bias of the media makes it impossible to have shared public perceptions, premises, and debate, I don’t know what to do at this point.

If we continue to accept the “mainstream” media as a good-faith actor, we condemn ourselves to believing misrepresentations, absurd exaggerations, and endlessly repeated narrative points, rather than simple facts.  I’ve never seen such an unseemly caterwauling as the one set up over the situation in Syria.  I don’t even agree with what Trump did, and certainly not with the way he did it, and yet it’s crystal clear that the media have been trying to sell us a bill of goods about Trump’s move and the consequences ever since.

The TDS-addled seem content to duel endlessly over biased media coverage.  But the biased media coverage puts severe limits on the quality of public dialogue the president and his top officials can count on.  The bias has become decisively toxic, in fact, to the point that it does no good for any of us to even talk to each other.  Nor do we learn facts from perusing the media’s offerings.

Instead, we get YouTube video footage from a gun range in Kentucky, edited so the American spectators aren’t visible, being presented by ABC as video of “Slaughter in Syria.”  There’s no living that down.  They had to go twice around the barn and stop for drinks along the way to come up with that one; you don’t just accidentally pull a video off YouTube, edit out the Yankee audience, and then use it to illustrate combat in Syria.

The video was actually from a military show at a Kentucky Gun Range. pic.twitter.com/NBLohxydw5

We also get viral circulation on social media of a Kurdish woman slinging a toddler around, pretending the little girl is dead – when she’s obviously very much alive (eyes blinking, mouth moving, foot kicking) – so the woman can berate the Americans.  Twitter was doing its level best on Monday to suppress the embarrassing ABC News video of the Kentucky gun range, but didn’t seem to have a problem with the deceptive video of the Kurdish woman.

You don’t have to be a partisan of either side to not appreciate these videos.

And we get to see journalist Kurt Eichenwald tweeting a distressing image of children apparently lying dead after a disaster – which turns out to be not from any recent Turkish attack on Syria, but from an earthquake in Turkey in 1983.

The “Pallywood” fake imagery industry has been working for 30 years to perfect all the tricks erupting from the U.S. media  over the last week.  But it’s almost minor league in comparison to the embedded premises and scare words festooning the media’s copy.

Forget the silly Drudge headline for this article at the New York Times.

There’s the silly opening paragraph to get past first:

President Trump’s acquiescence to Turkey’s move to send troops deep inside Syrian territory has in only one week’s time turned into a bloody carnage, forced the abandonment of a successful five-year-long American project to keep the peace on a volatile border, and given an unanticipated victory to four American adversaries: Russia, Iran, the Syrian government and the Islamic State.

Instead of discussing it point by point, let’s just rewrite that with a little journalistic objectivity, removing the untrue implications, and see what it sounds like:

President Trump insists he didn’t acquiesce to the attacks Turkey launched across the Syrian border last week. But as Kurdish casualties climb to more than 70 dead under the Turkish assault, it is unclear what the future in this volatile region holds for the Kurds with whom America has partnered for the last five years. The loss of American support presents unanticipated opportunities for American adversaries: Russia, Iran, and the Syrian government, along with a potentially resurgent Islamic State.

It doesn’t sound overly good for Trump.  But it also doesn’t sound misleadingly calamitous, nor does it assume facts not in evidence (such as the canard about a “five-year-long American project to keep the peace on a volatile border.” There has been no such project.  The five-year mission has changed several times, but its core focus at all times has been keeping conditions favorable for suppressing ISIS.  Obama’s administration would have rejected, as much as Trump’s, the suggestion that our forces were there to guard or pacify Syria’s border, on anyone’s behalf).

Descend, if you like, to the portion about the nukes in Turkey.  The author cites an unnamed official calling them “Erdogan’s hostages,” a formulation devoid of merit: first, because it doesn’t even have a parsable meaning, and second, because it provokes horror irresponsibly.  In no sense can U.S. nukes be called anyone’s “hostages” in this situation.

They’re a serious consideration, because they’re the longstanding token of a U.S. commitment to NATO and they continue to figure in all our strategic-power calculations.  It’s probably past time to soberly review their purpose in those calculations.  One situation or another that arises in the present may prompt such a review (as was suggested, for example, in the summer of 2016, when Erdogan felt he was facing a coup).  That’s life as a nuclear-armed superpower, which we ought to feel the gravest responsibility for.

But it’s the opposite of grave and responsible to pack in false premises like sardines so you can refer to U.S. nukes, impressionistically, as “Erdogan’s hostages.”  Erdogan misconstrues a lot of things, but there’s no evidence that who controls the U.S. nukes in Turkey is one of them.

Unnamed officials, in combination with the media, plant poisonous impressions on these matters every day.  The wonder is not so much that they do that as that so many otherwise intelligent people think they are hearing ground truth from the media about either the Trump administration or contentious public issues.  I’m not sure the legacy media even know how to simply write about facts anymore.

That’s why I expect them to keep flogging the same narrative about “calamity in Syria,” no matter what actually happens, until – following their typical pattern of the last few years – they drop the subject and move on to the next paroxysm of journalistic outrage against the walking litmus test that is Donald Trump. 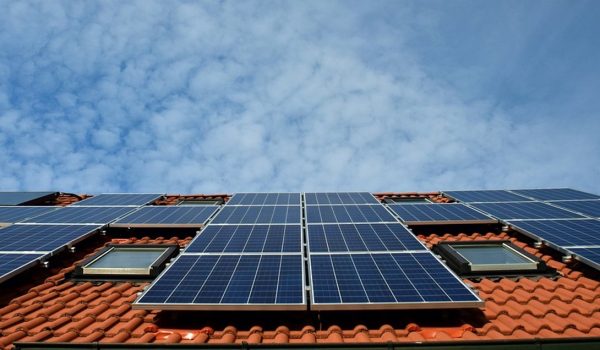 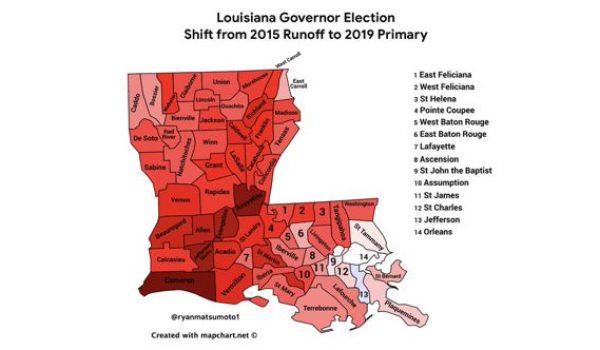