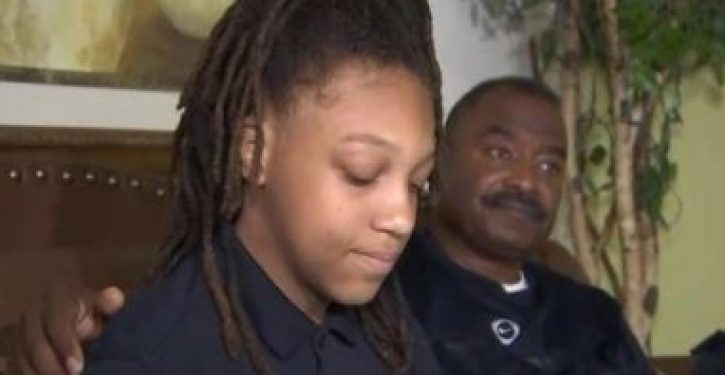 The child who lied about being attacked (Image via Twitter)

The title question, which arose in reaction to the Jussie Smollett hoax, is worth exploring again in the context of the most recent hoax, but a new ancillary question should be examined as well. That question is whether there should be a minimum age for hoaxers to be charged?

The impetus for both questions is a story that appeared within the hour in the Washington Post that reports that a “sixth-grade girl at a private Virginia school who accused three classmates last week of forcibly cutting her hair now says the allegations were false, according to statements from the girl’s family and the principal at Immanuel Christian School in Springfield. School officials met with the girl and her family Monday morning before releasing the statement.”

Last Thursday, the same Post writer, Joe Heim, reported that the 12-year-old, who is black, claimed that three white male students held her down on a school playground during recess. Covering her mouth so she couldn’t scream, they boys snipped off her dreadlocks, all the while calling her insulting names. Police were immediately called in, and an investigation was launched.

Today in a statement to the media the school’s principal, Stephen Danish, thanked the cops for their diligence, adding, “While we are relieved to hear the truth and bring the events of the past few days to a close, we also feel tremendous pain for the victims and the hurt on both sides of this conflict. We recognize that we now enter what will be a long season of healing.”

Wait, what? The “victims on both sides of this conflict”? First of all, what conflict? This was an out-and-out lie told be a prepubescent for whatever reason. Second, while there are many labels that can be applied to the guilty party, from “confused” to “liar,” under no circumstances can she be called “a victim.”

The Post article quotes the Fairfax County NAACP, which issued a statement acknowledging the girl’s guilt, but then turned around and admonished, “Too often in these rare instances of fabricated hate crimes, critics use a broad brush to claim racially motivated crimes are virtually non-existent. This is demonstrably wrong.” How hard would it have been to acknowledge that the girl lied without furnishing the world with a lecture on how nasty the “critics” tend to be?

Come to think of it, there are lots of questions that need to be raised.