In the interest of getting this posted, we’ll forgo extensive commentary and just let you, our intelligent readers, have at it.

A couple of excerpts from the transcript (link at bottom) may whet your appetite.  (They may also put you to sleep, but at least pause to note the context.)

As suspected, Trump’s query about the Bidens’ activity was made in the prior context of Ukrainian links to the larger saga of the 2016 election.  Trump opens with a reference to CrowdStrike and the DNC server, and that, along with a couple of other references and the fact that he asks President Zelensky to call Attorney General Barr as well as Rudy Giuliani, makes it clear that this is about the Justice Department investigation of Spygate, assigned by Barr to John Durham.  (I mentioned that assumption in the article about the “impeachment inquiry” on Tuesday.)

Trump to Zelensky: “I would like you to find out what happened with this whole situation with Ukraine, they say Crowdstrike … I guess you have one of your wealthy people… The server, they say Ukraine has it.  There are a lot of things that went on, the whole situation .. I think you’re surrounding yourself with some of the same people. I would like to have the Attorney General call you or your people and I would like you to get to the bottom of it.  As you said yesterday, that whole nonsense ended with a very poor performance by a man named Robert Mueller, an incompetent performance – but they say a lot of it started with Ukraine. Whatever you can do, it’s very important that you do it if that’s possible.”

This goes to confirm the analysis that the massive spin from the media and congressional Democrats on the “whistleblower” complaint is meant to throw shade on the Spygate probe and whatever it uncovers about connections in Ukraine.  Ukraine seems to be a particularly sensitive spot.  The Left really doesn’t want Ukraine’s role in Spygate looked into.

Zelensky responded, in part:  “I will personally tell you that one of my assistants spoke with Mr. Giuliani just recently and we are hoping very much that Mr. Giuliani will be able to travel to Ukraine and we will meet once he comes to Ukraine.”  (There’s considerably more in the reply, but most of it isn’t substantive.)

One more excerpt from Trump:

Good because I heard you had a prosecutor who was very good and he was shut down and that’s really unfair.  A lot of people are talking about that, the way they shut your very good prosecutor down and you had some very bad people involved. …

I will ask him [Giuliani] to call you along with the Attorney General. Rudy very much knows what’s happening and he is a very capable guy. If you could speak to him that would be great. The former ambassador from the United States, the woman, was bad news and the people she was dealing with in the Ukraine were bad news so I just want to let you know that.  The other thing, there’s a lot of talk about Biden’s son, that Biden stopped the prosecution and a lot of people want to find out about that so whatever you can do with the Attorney General would be great.  Biden went around bragging that he stopped the prosecution so if you can look into it … It sounds horrible to me.

I’m sure this made some Democrats, media, and “permanent state” revolving-door politicos livid.  They got voted out in 2016, and the current president sees things differently.  He represents millions of voters who see it differently.  These are political differences.  They are not crimes.

I’m sorry to think that there are Never-Trumpers on the Right who need to acknowledge that, as much as those on the Left do.  It simply is not criminal, or unethical or immoral, for a president to speak on the basis of the political judgment he was elected to exercise, when he is in conference with a foreign leader.  If I thought an ambassador appointed by my predecessor was “bad news,” I might put the matter in different words – but I would not fear to convey that point to the new president of Ukraine, in a phone call about turning over a new leaf in our state-to-state relations.

Trump shouldn’t fear to do it either.  Nor should he remain silent about something as important as getting to the bottom of what the Bidens were doing.  It has been manifest since Giuliani had to cancel his fact-finding trip to Ukraine in May that the U.S. has been encountering resistance – not just from pre-Zelensky Ukraine but from the offices of the former U.S. ambassador – in the effort to determine the extent and nature of what apparently was collusion with Ukrainian actors during the 2016 election cycle.

The American people have the overriding interest in knowing the truth about the Democrats’ and the Obama administration’s involvement with Ukraine as it touched the campaign.  For that matter, we have the overriding interest in knowing what happened with the Bidens, Hunter Biden’s appointment to a corporate board he had no background for, the U.S. aid that disappeared in transactions involving that corporation, and Joe Biden’s self-reported success in getting a Ukrainian prosecutor fired because the man was looking into it.

Don’t dare to tell the people that it is wrong to emphasize to Ukraine’s new president the importance of finding that out.  There is no valid principle on which some annoyance about tone or wording takes precedence over the substance of this matter.  It takes Trump Derangement Syndrome of the most virulent variety to suggest that there is.

Here’s the PDF of the phone call transcript.

Nancy Pelosi puts the cart before the horse in announcing ‘impeachment inquiry’
Next Post
Cartoon of the Day: ‘Blue’ plight special 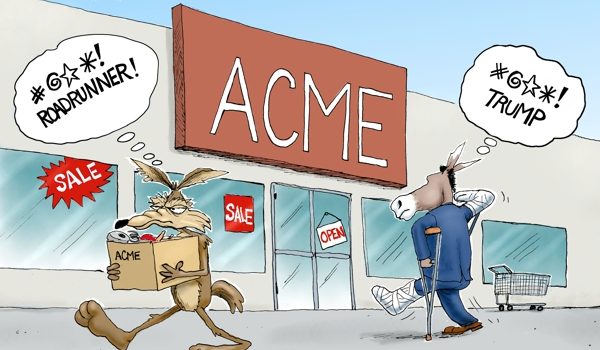