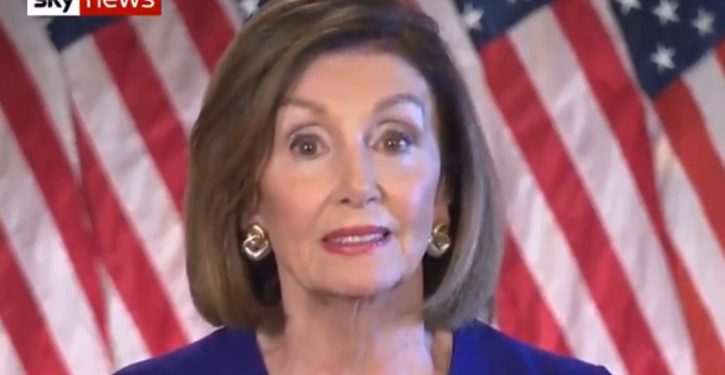 House Speaker Nancy Pelosi has announced this as a “formal impeachment inquiry.”  But no evidence of a high crime or misdemeanor (or a low one, for that matter) has been referred to Congress, or uncovered by any proceeding in Congress.  Nor has there been a vote of the House to proceed with an impeachment inquiry, formally designated.

If you don’t like calling it a “witch hunt,” please act according to your preference and call it something else.  What Republicans argue it is not, however, is a formal impeachment inquiry.  (See House Minority Leader Keven McCarthy, below.)

McCarthy and other Republicans argue that to be a formal impeachment inquiry, it would have to be voted on by the full House and have a substantive matter for impeachment.  The Speaker doesn’t just get to say there’s an impeachment inquiry with a hand-wave, dub it a formal inquiry by the same method, and then invoke the investigative powers of Congress without a substantive matter to refer to for subpoenas and the scope of inquiry.

Nancy Pelosi announces an official impeachment inquiry into President Trump: "No one is above the law" https://t.co/DtuEVS3E7s pic.twitter.com/ZFrDQEjp1x

There is debate about who’s right on this point, the Democrats or Republicans.  But keep in mind, there is no evidence at this point.  Nor is there a defined crime.  There is a hearsay allegation about something that cannot actually be a crime, because if it’s something the president did, it was within the scope of the execution of his duties.  Judging it to be improper is a matter of applying a political standard adopted by the House — not applying a standard defined by statute.  Announcing an impeachment inquiry, per se, before evidence about the events has even been presented, much less an assessment of impropriety justified, is the opposite of due process or the rule of law.

As a refresher, there was good reason for the U.S. federal government to be in contact with Ukraine about the activities of the Bidens.  Hunter Biden was profiting monetarily from the actions of state taken by his father, and the foreign company he was profiting through was linked to the unaccounted-for disappearance of U.S. taxpayer funds.  Hunter Biden was under investigation by Ukraine in 2016, when his father, according to former Vice President Joe Biden’s own statements, got the prosecutor who was investigating him fired — using the threat of withholding aid funded by the American taxpayer.  At the same time these events were occurring, the Democratic Party in the United States, and U.S. federal agencies under President Obama, were soliciting information from official Ukrainian sources about the potentially criminal activities of a member of the Trump campaign.

Neither of those acts was a crime, per se.  The Democratic Party is a private entity, and like journalists and private eyes can ask what it wants.  Federal agencies (e.g., the FBI, or the ambassador him or herself, as the president’s chief representative, or the president for that matter) may have legitimate reasons of state for requesting information or actions on U.S. citizens, although that must be done using due process of law, to ensure compliance with the Fourth Amendment.

I’ve written repeatedly on the point, in fact, that if the Obama administration thought it had evidence of Americans conspiring with Russia to tank the 2016 election, it certainly had both the authority and the obligation to look into that.  The concern all along was that the administration’s actions should have been very different if that was genuinely the case — starting with defensive briefings to the candidates, countermeasures against Russia, and material measures taken during the campaign season to secure the election, rather than merely seeking to designate “infrastructure” as critical to national security.

But all of that means it is also not a crime if the Trump administration makes official requests about information on U.S. citizens that may include evidence of criminal activity.  The president may not commission witch hunts abroad.  But under the advice of his agencies, with justification assembled through due process, there is no reason why he can’t speak to a foreign leader about the investigation of a U.S. citizen.  If the FBI, the Justice Department, or the ambassador can speak to their foreign counterparts on such matters, the president inherently can.

House Minority Leader Kevin McCarthy on Speaker Pelosi opening an impeachment inquiry into Pres. Trump: "This election is over. I realize 2016 did not turn out the way Speaker Pelosi wanted it to happen but she cannot change the laws of this Congress." https://t.co/QXFmkJxheN pic.twitter.com/5IzbxeLXJG

He can do it even if the U.S. citizen’s father is running against him for president.  It’s his job.  There is no law or custom that the president must recuse himself from all matters under his constitutional purview if his electoral opponents may be involved.  It would be an insane travesty of the very basis of law if there were.  The restraint on the president in such cases is transparency and the expectation of checks and balances; it is not an obligation of recusal.  His actions must bear up under inspection.  They are not to be prohibited a priori.  (The Durham investigation of Spygate, incidentally, is presumably what lay behind renewed concern about the Bidens’ activities in Ukraine from 2014 to 2016, which intersected at several points with the actions of the DNC, the Clinton campaign, and the U.S. embassy and Justice Department in their pursuit of Paul Manafort, and other election-linked information from Ukrainian sources.  John Durham’s Justice Department investigation is a due process of law.)

Until all the standards for a true impeachment are met, there should rightfully be no obligation for anyone in America to cooperate with this “inquiry” by House Democrats.  Congress could actually start with an inquiry that wasn’t about impeachment, in order to determine facts.  That would be fair process, even though it too would seem to be jumping the gun.  But cooperating with Congress on that basis would be different from cooperating when the prospect of impeachment has been declared in advance.  We are not a banana republic, nor does Lavrentiy Beria run our judicial system, waiting to be shown the man so he can find the crime to hang on him.

I fear, however, that what the Democratic-led House will do next is find the most vulnerable witnesses it can locate, and try to intimidate them with threats of ruinous monetary fines and/or litigation if they don’t present themselves for harassment before a House committee.

There may well be willing “witnesses” too, partisans whom the House can depend on to make scurrilous accusations about the president and his administration.  It’s a good question whether the so-called “whistleblower” will testify, given the reports from multiple sources that the “whistleblower” has no direct knowledge of the phone call between Trump and Ukrainian President Zelensky in July.  The House Democrats may want that individual to testify, but I can think of good reasons for the individual’s counsel to advise against it.

The president, in such a case, is under no obligation to cooperate by releasing material or sending his officials to breach executive privilege before a House committee.  In fact, the many pundits who have observed this have a good point: Trump should be reluctant to release information about his now-famous phone call with Zelensky because it breaches Zelensky’s expectation of privilege in a conversation between heads of government.

That said, it sounds as if the transcript of the phone call probably will be released at some point.  Trump has already suggested as much, and the Senate voted today to request it.  (Note the word “voted.”)  The “whistleblower’s” complaint is also reportedly to be made available to Congress this week.

As it stands, however, this move in the House is an attempt to railroad the American people: to drum up an emotional sense that there is something terrible going on, while there is no evidence of it.  There is no defense for behaving this way.