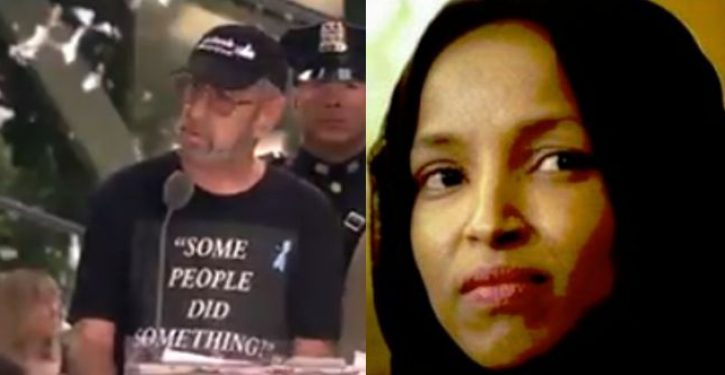 Nicholas Haros, son of a victim of the 9/11 terror attacks, ripped into Rep. Ilhan Omar over her latest 9/11 comments, saying she shouldn’t pretend to be the actual victim.

Haros, who appeared on Fox News’s “The Story with Martha MacCallum,” was responding to Omar’s assessment that as a Muslim, she was twice the victim of those that suffered that day.

“I think it is really important for us to make sure that we are not forgetting, right, the aftermath of what happened after 9/11,” Omar said on “Face the Nation” this past weekend. “Many Americans found themselves now having their civil rights stripped from them.”

Omar went on to bash Americans and their response to the 9/11 attacks as being hateful toward Muslims.

“As a Muslim, not only was I suffering as an American who was attacked on that day, but the next day I woke up as my fellow Americans were now treating me as a suspect,” she claimed without evidence.

Haros slammed her for playing the victim card. (RELATED: Son of 9/11 Victim Slams Pelosi and Booker For Using Tragedy as ‘Political Theater’)

“I thought about it and what I heard her say the second time was that she cannot feel pain for the families and that we should just remember and never forget not the day but the aftermath, and I think that doesn’t quite hit the mark,” Haros said. (RELATED: Omar Was Asked About Her 9/11 Comment ‘Some People Did Something’)

Indeed, Democrats have sought to whitewash the significance of the tragedy almost from day one. How many times have you heard the media say something along the lines of “most attacks have been at the hands of white nationalists since 9/11?” They doctor their numbers and stats by wiping out the nearly 3,000 victims from that day.

“I don’t personally need an apology but I do think you need to apologize to the American people,” Haros insisted. “You can continue to support a fringe group of Muslims. … Do you want to be on the side of peace-loving Muslims as I am, or do you want to continue to represent the fringe element?”

Nicholas Haros Jr., whose mother Frances Haros was killed in the World Trade Center at age 76, with a total smackdown of #TheSquad at today's #NYC memorial. #remember911 pic.twitter.com/d7wod4jAic

“All I would suggest, perhaps, that let’s place the victim card where it belongs and that’s on the families,” Haros concluded. (RELATED: Man Whose Mother Died on 9/11 Blasts Ilhan Omar During Ground Zero Memorial)

Some critics have suggested Haros should not be using a day of remembrance for 9/11 to push a political agenda. But isn’t that precisely what America haters like Ilhan Omar so the other 364 days in the year?

Dems want to ‘buy back’ Americans’ guns? What would that cost, and who would pay for it?
Next Post
Biden claims tax credit will put ‘720 million women’ back in workforce: just one problem