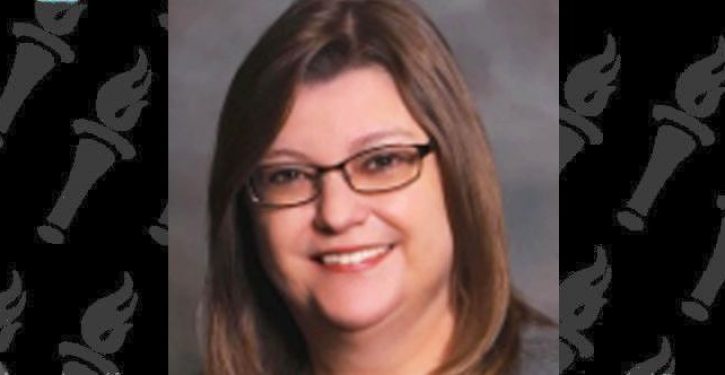 Lisa Gill. Has seen a Jew in person in her lifetime. (Image via News and Tribune)

One pound of flesh, please.

In case you’re unfamiliar with the expression,  Wiktionary defines Jew down as meaning “to bargain or haggle with a seller in order to obtain a lower price for a good or service.” For those who need further enlightenment, the site further explains that the term derives from the “stereotype of Jews as parsimonious and driving hard bargains.”

According to an article at the News and Tribune, Jeffersonville, Ind. City Council Vice President Lisa Gill was commenting at a meeting on the fire department’s request for a new service truck.

After the department’s vehicle maintenance director concluded his initial remarks on the request, Gill asked “did you mention that you actually called about that truck and actually, what I call Jewed them down?”

Gill said afterward in a statement, “I inadvertently made a statement at a public meeting when referring to negotiations of a maintenance vehicle. My comment in reference to that negotiation was not meant to be insensitive, anti-Semitic or offend anyone. I apologize for my comment, and it will not be used again.”

When you speak on the record in a public forum like this, you make mistakes sometimes and you misspeak. I’m sure she didn’t mean to demean or hurt anybody’s feelings in any way. I think it’s one of those situations where she just slipped up.

Perhaps Gill’s minor faux pas was easier for council members to overlook because Jeffersonville’s Jewish population is apparently minuscule. (According to Best Places, 0.0% of the city’s population “are Judaism.”)

Reporters did interview Jewish resident Michelle Elisburg, who notes that anti-Semitism is a pesistent problem and one that knows no age boundaries:

Everybody knows my kids are Jewish. My daughter was in English class doing a project with a girl, and their word was ‘sanctity.’ The girl used ‘everybody celebrates the sanctity of Jesus’ as their example sentence. My daughter said that not everybody does, including her since she’s Jewish. The girl then said ‘well, I guess we know who’s going to hell.’

Elisburg is quoted further as saying that “apologies aren’t enough” when offenses like this occur:

All of these apologies that have happened have meant nothing. They’re just words. The perpetrator isn’t actually facing the person they hurt. Unless you really personalize it, you won’t internalize it. If it’s out of ignorance, they need to be educated. I would think that getting involved with some sort of interfaith program would help. Maybe meeting with some rabbis and learning how these things are offensive. I would like to see a more active way to try to understand the meaning of what you’re doing.

So what happened when the city attempted to plan an interfaith event? They scheduled it for April 20 — the first night of Passover.

In closing — and take it for what it’s worth — this story was deemed too insignificant to earn the attention of the national media, including the networks. One supposes the story would have generated more of a response if instead of Jew down, Gill had used the locution be niggardly.