As has happened every Sept. 11 since the fateful day when 19 maniacal Islamists commandeered four jetliners, steering two of them into and demolishing the World Trade Center’s twin towers in downtown Manhattan, the names of the fallen were solemnly read this morning at Ground Zero.

This year, the solemnity of the event was interrupted briefly by one of the readers, Nicholas Haros Jr., who lost his mother on Sept. 11, 2001. Haros felt the occasion this year would be incomplete unless he addressed the vain and heartless words uttered in April by freshman Rep. Ilhan Omar, who declared before an audience of fellow grievance mongers that on 9/11, “Some people did something.”

Haros arrived at the memorial site this morning wearing a t-shirt that converted Ilhan’s indefensible claim into a question that he repeated as he began his reprimand of Omar at 0:57 in the second video below. The text of his message follows:

“Some people did something” said a freshman congresswoman from Minnesota to support and justify the creation of CAIR? Today I am here to respond to you exactly who did what to whom. Madam, objectively speaking we know who, and what was done. There’s no uncertainty about that. Why your confusion? On that day, 19 Islamic terrorists, members of al Qaeda, killed over 3,000 people and caused billions in dollars of economic damage. Is that clear? But as to whom? I was attacked. [To an individual standing nearby:] Your relatives and friends were attacked. Our constitutional freedoms were attacked. And our nation’s founding on Judaeo-Christian principles were attacked. That’s what some people did! Got that now? We are here today, congresswoman, to tell you and the “Squad” just who did what to whom. Show respect in honoring them, please! American patriotism and your position demand it. For God and country. Amen.

Nicholas Haros Jr., wearing a black T-shirt with the words “Some people did something?,” addresses, CAIR, Ilhan Omar & the other members of “the Squad” after reading the names of the dead, including his mom, Frances Haros, at the #September11 ceremony.#NeverForget pic.twitter.com/SRKFFXOIoW 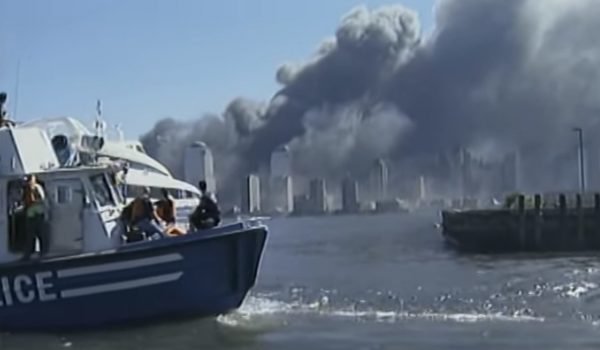