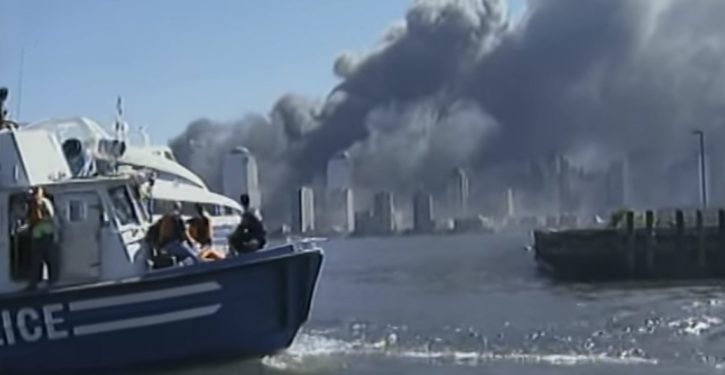 Manhattan skyline shortly after Twin Towers collapsed on 9/11, from rescue boat on the Hudson. YouTube

As the 18th anniversary of the 9/11/2001 attacks passes, there are two powerful senses.  One is that this year’s remembrance is an especially strong and gripping one (see Ben Bowles’s tribute), an assurance that we will, indeed, Never Forget.

The other is that 9/11 as an event that shapes us is moving into the past.  This is not because it was a small thing, any more than World War II was.  It’s because in the years since, other energies and wounds have come to loom larger for us.

The iconic memories of 9/11 are set before us each year on this day: the towers being hit, the tears and horror as desperate people leaped from them in flames, the blank shock as the mighty Twin Tower edifices collapsed into the streets of Manhattan, the wail of sirens, the clogging, billowing smoke, the hours of suspense, of a plane hurtling into the Pentagon, of rumors of another one crashing in Pennsylvania, of the skies eerily stilled and a whole nation transfixed by TV and radio reports endlessly repeating the same words, the same rumors, the same refrain.

The memories of the recovery of national will are with us too.  The events of 9/11 are branded on our souls.  But in 2019, indelible as they are, they begin to feel like the past.  They have shaped us, but their work is done.

It’s likely that we will realize, in the future, how profoundly our world did change between 2001 and 2019.  To do that, I think we’ll have to get past the cognitive hurdle of a media industry that looms large over our consciousness, trying to focus our understanding through the lens of a narrative that has been frozen since about 1968.  Until that lens has fully shattered, we’ll continue having trouble connecting with reality.

In the meantime, I can only speak for myself in saying that 2019 seems to mark the year in which the sense of a fixed present is passing.  I do seem, also, to see more commentators this year remarking that 9/11 feels now as if it happened 100 years ago.  Again, this doesn’t mean its importance is diminished, or that we are at liberty to “move on” or forget.  We don’t even want to, as far as I can tell.  So many among us remain walking wounded; our hearts will carry it forever, and as a nation we want to step up to all of its lingering needs.

But this year, for the first time, I didn’t especially want to go over the story of where I was on 9/11.  I think that’s a big part of things shifting into the past.  They aren’t about us anymore.  They are true memories, and no longer reflexes – no less precious, but they move us in different ways.

This year, the main thing it occurs to me to do is commemorate a group I have seldom seen remembered as a group.  They’ve been remembered that way by a small band of brothers and sisters, of course, reading their names at quarters and laying wreaths at their graves.  I knew three of them personally, and a fourth from a distance through the usual channel, watch-center-to-watch-center interaction.  In a way, it doesn’t even matter which ones, but you may guess that they were my contemporaries.  Men of steel; husbands, fathers, sons, brothers, sailors.

As the present inexorably becomes the past, let me take this year to write their names, in this small way, on eternity.  May we Never Forget.

Two stirring videos to watch on 9/11, one directed personally at Ilhan Omar
Next Post
The Flynn Brady request: A reminder of how this whole thing could have been avoided