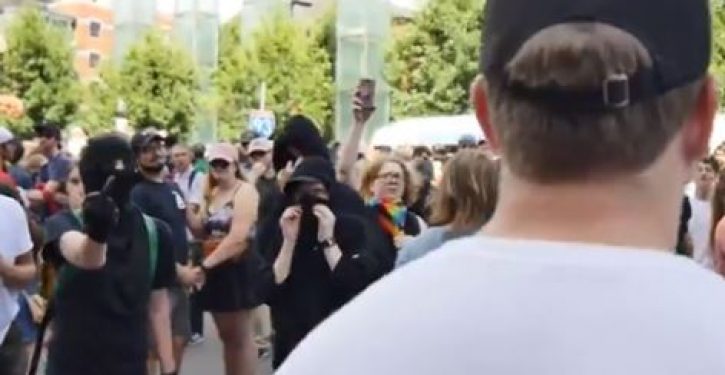 “Squad” member Alexandria Ocasio-Cortez, whom DNC Chairman Tom Perez has called “the future of the Democratic Party,” has involved herself in raising bail money for Antifa, some of whom are in jail for attacking the police. The domestic terrorists were  in Boston this past weekend attempting to disrupt a straight pride parade and committing assault and battery on a police officer.

The Boston Herald interviewed one of the Antifa members:

“We’re covered in black so when we attack these guys we can’t be prosecuted,” said Jon Crowley, an Antifa member who told the Herald that he felt violence was the only way to deal with the people marching in the parade, which went from Copley Square to City Hall Plaza. “They are fascists, 100%. How else are you going to get them to shut up?”

The IQ-challenged Ocasio-Cortez wants to see the arrested Antifa members set free, as does her “Squad” sister Ayanna Pressley:

Contribute to the Bail Fund for the activists who put themselves on the line protecting the Boston community:https://t.co/z2NRSqHMve

While I find the idea of a straight pride parade kind of silly, calling the marchers white supremacists is a bridge too far. It appears that Ocasio-Cortez believes that all straight people are white supremacists. But there are heterosexual people of every race. For that matter, there are gay people of all races. So just what in the world is she talking about?

Among the 36 people arrested, one teen has been charged with “assault and battery by means of a dangerous weapon.” according to the Herald.

One of the alleged victims posted this:

?ALERT? Boston Antifa threatened me w/ assault, threw liquid on me, called me a N*zi, & refused to engage in civil dialogue.

They tried to form a mob around my crew, but we don’t play childish games. It’s hard to convince people you’re against fascism when u use their tactics pic.twitter.com/RDR8Tf9lEn

Many were incredulous that a sitting member of Congress would underwrite freeing domestic terrorists, especially one who throws around terms like concentration camps. Typical of the response to Ocasio-Cortez’s tweet: 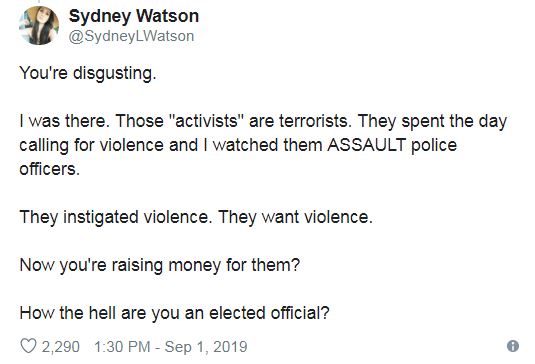 Chicago had 41 shootings over Labor Day. Who does mayor blame for city’s gun violence?
Next Post
Bernie Sanders: Poor whites ‘were given ‘n****rs’ to hate and look down on’