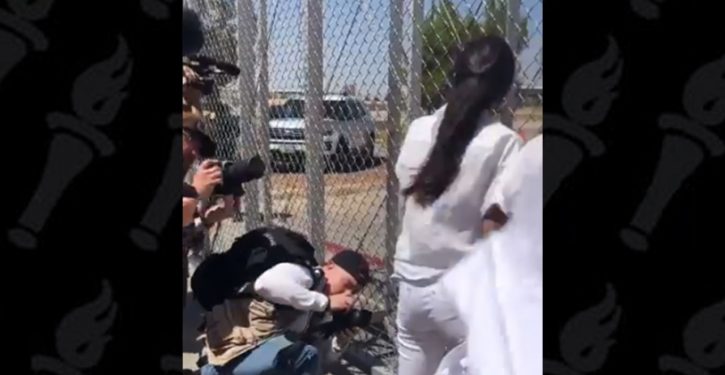 We all know what happens to schoolchildren who can’t behave in class. They are sent to the principal’s office. But what happens to them when they grow up and still act out of turn? This: The Department of Homeland Security (DHS) barred Democratic House Oversight Committee staffers from entering border facilities this week following previous visits in which they were accused of being “disruptive” and “rude.”

Staffers, at the direction of Committee Chairman Elijah Cummings (D-MD), inspected facilities last week and had planned to tour more this week. But their behavior on previous visits – which reportedly included skipping portions of the tour, being “rude” to officers, and even refusing to leave the site at the conclusion of the tour – led to them being barred from visiting Customs and Border Protection (CBP) facilities this time around.

They will still be permitted to attend two-hour tours of Immigration and Customs Enforcement (ICE) facilities.

DHS isn’t having it.

EXCLUSIVE: @DHS has barred Democratic staffers from @OversightDems from visiting @CBP facilities at US-Mexico border as part of a planned trip this week after cmte staff allegedly were “disruptive” and refused to follow instructions during their last triphttps://t.co/XeGverVFJ1

Perhaps the most egregious sin – though we suspect DHS is being polite when they say the staffers were simply “rude” – is remaining in a secure area past the time allotted. DHS complained that such actions “interfered” with law enforcement operations.

Rather than learning and understanding that their childish behavior was unacceptable, committee staffers allegedly said they would continue to refuse to abide by the rules in future visits. Thus the banishment.

Assistant Secretary of Legislative Affairs Christine Ciccone wrote to Cummings that “Committee staff repeatedly stated that they do not intend to abide by DHS guidelines.”

It’s behavior like this that has led unhinged liberals to believe they do not have to respect law enforcement, emboldening some to take actions such as hanging a Mexican flag in place of the American flag at one ICE facility and even conducting an attempted terror attack at another. (RELATED: Former Obama Border Chief: Elected Leaders Like AOC to Blame For Terror Attack on ICE Facility)

Here’s something that’s really rich: The Democratic staffers are also accused of crossing the border into Mexico illegally. Who could have predicted liberals wouldn’t respect border rules?

Ranking committee member Jim Jordan, in a letter to Cummings, advised him that the staff crossed into Mexico “without consultation from the Department of State.”

“Several Border Patrol agents told us the nasty rhetoric from Democrats in Congress – one Member of this committee even likened them to Nazis – hurts morale and makes some agents reluctant to tell people what they do for a living,” Jordan added, taking a clear shot at Ocasio-Cortez.

Last month, Ocasio-Cortez toured illegal immigrant holding facilities where witnesses said she “was crying and screaming and yelling” at border agents, then emerged by lying about women being forced to drink from toilets.

These Democratic staffers are simply emulating the behavior of the new face of the Democrat party.