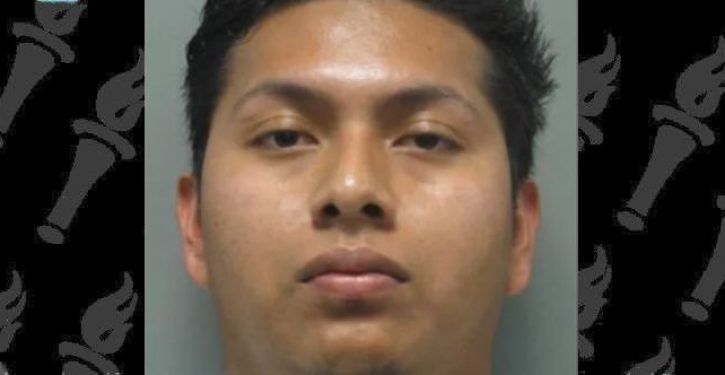 How many incidents in one month will it take to persuade the Left that we have a border crisis and a problem in this country with criminal illegal aliens?

Just yesterday, I brought you the story of Nelson Reyes-Medrano, a Salvadoran national living in the U.S. illegally, who crawled into bed with a 16-year-old female and raped her at knife point. He was the fifth illegal in Montgomery County, Md. to be arrested for rape in one month.

Today, the number rose to six. The Daily Caller reports that another “undocumented” Salvadoran national living in the same county (which is a sanctuary!) is in police custody, accused of molesting a 12-year-old girl and her younger brother.

Nestor Lopez-Guzman, 21, was arrested by Montgomery County Police on Aug. 18. A friend of the 12-year-old victim told a school counselor that her friend had been molested by Lopez-Guzman, according to the police report. The victim then confirmed that the abuse had been occurring over the past six months. Lopez-Guzman also confessed to touching the “private parts” of the victim’s brother, but insisted it was a cultural joke in El Salvador used to make fun of men.

Per ICE, the 21yo is a Salvadoran national living in the U.S. illegally.

This is at least the sixth undocumented immigrant arrested in Montgomery County, Md. on rape/sex abuse charges since July 25. pic.twitter.com/KSmT05qajU

Immigration and Customs Enforcement (ICE) issued a detainer against Lopez-Guzman after his arrest and took him into custody on Aug. 20. But as we learned today via another Daily Caller post, Montgomery County Executive Marc Elrich claims to believe his hands are tied when it comes to honoring ICE detainers, stating:

It is the court system that determines whether someone is held without bail or whether a bail is set, and it is our court system alone, that decides when and how people are released.

Customs officials have dismissed the notion as “absurd” and “insulting,” arguing that law enforcement personnel are well within their jurisdiction in responding to ICE detainers.

In any case, Lopez-Guzman was released after posting immigration bond on Aug. 21.