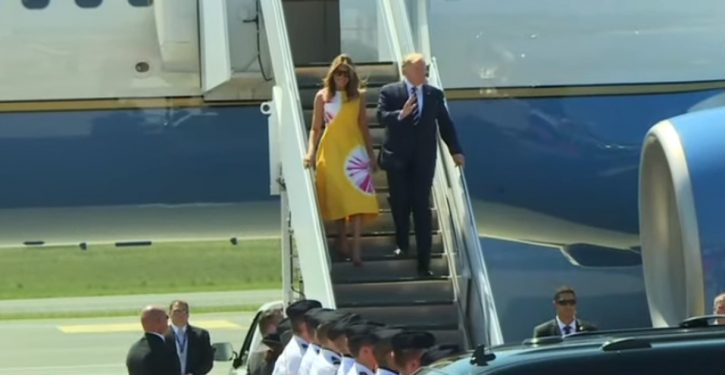 French President Emmanuel Macron invited Iran’s foreign minister, Mohammad Javad Zarif, to crash the G7 party in Biarritz this weekend.  He didn’t try to set Zarif up for a full-scale group grope with the G7, but the timing was still pretty bad.

We’ll get to that in a minute.  The bad timing is important, but I think the game played by the U.S. media (and some other Western media) is actually more so.

‘Blindsided’ by the flight

The gist of the game was to report that Trump was “blindsided” by the arrival of Zarif on Sunday.  There were variants of this, indicating in less trenchant terms that Zarif’s arrival was a surprise.

The narrative theme being sold is that this was an in-your-face move to highlight the EU’s, or at least France’s, daylight gap with Trump on Iran policy.  And clearly, Macron was pulling a stunt.  (French media referred to it as a coup de théâtre.)  While Macron had a captive audience in Biarritz, any such move would be a stunt.  So the counterpoint to be highlighted here is not that it wasn’t a political stunt.

It’s that the media rushed to help frame it in anti-Trump terms, up to and including the omission of a salient piece of information.

The U.S. reporting, and much of the reporting from Western wire services, adhered to the theme that the visit was a surprise, Trump was taken by surprise, and this was something of a black eye for Trump.  Some reports even quoted anonymous sources to the effect that the Trump administration was not informed of the visit in advance.

However, French media reported based on on-the-record comments from the foreign ministry that Macron had informed all the G7 delegations beforehand, including the U.S. delegation, that Zarif would be coming.  (Le Figaro says it was on Saturday, and in fact that Trump was the first one informed, in his one-on-one lunch with Macron.  The other G7 members were told during an event Saturday evening.)

AP later picked up on that, but not until after the mainstream media had issued forth the “Trump blindsided” theme with a trumpet fanfare.

This was not a lengthy prior warning, to be sure, especially not in diplomatic terms.  But anyone watching the live U.S. coverage of the G7 summit on Sunday would have gotten the impression that there was no warning at all.  (A few pundits observed that it was unlikely Macron really sprang this as a total surprise on his fellow G7 leaders.  Their voices probably had little reach past the MSM headlines, however, which were couched in language to emphasize Trump being caught flat-footed.)

It’s worth noting at this point what any old intelligence salt could tell you: that Macron pretty much had to inform his guests, because most of the G7 dignitaries would have known it anyway, through intelligence monitoring – of Iran, if not of France.

The idea that Zarif could sneak into France on an Iranian government plane, and into the summit venue in Biarritz, is pretty humorous.  Even aside from national intelligence services, there are communities on social media that follow the activities of government planes using online services like Flightradar24.  (I haven’t checked, but it’s quite possible that information about Zarif’s plane was being tweeted before he arrived in France.  Users would have deduced that some high-level Iranian official was on the way, even if they weren’t sure which one.)

The mainstream media count on their audience not knowing these things.  So after Le Figaro, Le Monde, and others reported that the Macron government had informed its guests Zarif was coming, U.S. media reported that Trump was taken by surprise anyway.

This happens incessantly.  It’s why all reporting about what is known or not known, thought or not thought, by the Trump administration needs to be taken with an economy-size block of salt.

It’s of supreme importance, moreover, to point out that the “belittle Trump” theme, as a main effort for the media, obscures realities that ought to be the primary focus.

The legitimate beef with Macron’s move

Trump wasn’t particularly happy about Zarif’s visit, especially the part where Macron showcased it in conjunction with the G7.  But he wasn’t an uninformed dupe in this little drama, nor could he have been.

His unhappiness would stem rather – at least in part – from the bad timing of the Zarif visit, which was not a superficial thing.  In the last few days, Iran has been caught preparing a massed drone-bomb attack on Israel, for which Israel conducted a preemptive strike in Syria on Saturday.  Reportedly, Qods Force chief Qassem Soleimani personally directed the planning of the drone attack.  (This move comes after months of Iranian attempts to stock Iran-backed proxy forces up on short-range missiles with which to attack Israel from Iraq and Syria.)

Iran is also in the big middle of running the supertanker Adrian Darya 1 (ex-Grace 1) toward the Eastern Mediterranean, with the presumed intent to offload a cargo of crude oil in violation of U.S. sanctions (and probably EU sanctions on Syria).  Officially, the nations of Europe are not helping Iran to violate the sanctions, at least not overtly.  Unofficially, Adrian Darya 1’s run is a benchmark test of just exactly how far Europe is willing to go, to placate Iran at the expense of relations with the United States.

Zarif’s visit to Biarritz also, of course, follows several months of escalating Iranian provocations in the Persian Gulf and on the Arabian Peninsula, from attacks on Saudi oil infrastructure – including at least one conducted from Iraq rather than Yemen – to mining oil tankers in the Strait of Hormuz and shooting down a high-dollar U.S. drone.

But other than the attack preparations against Israel, interrupted by the IDF, the Iranian move most proximate to the G7 summit was Iran’s issuance of a threat against an American think-tank, of all things.  On Saturday, Iran announced sanctions executable by the nation’s “security apparatuses” on the Foundation for Defense of Democracies (FDD), a decree that included the CEO, Mark Dubowitz, targeted by name.

This action is based on an Iranian law governing financial operations, but isn’t a narrowly judicial warrant; it’s more in the nature of a fatwa (although not framed explicitly as one; i.e., by a senior cleric).  The implication of its wording is that Iran authorizes whatever means are necessary to use finance as a vector for attacking and reducing the effectiveness of FDD.

Today, the Islamic Republic of Iran targeted and threatened FDD.
Our official statement:

As a threat to a civilian think-tank, it isn’t funny; certainly not for the staff of FDD, and not for those who may cooperate with it to provide information.

In fact, this move makes false allegations of cooperation with the FDD more likely, in order to invoke the order against third parties.  It could endanger Iranians and other FDD partners and sources.  The Iranian order may look mostly symbolic at the moment, but there’s a good chance Iran doesn’t see it that way, and has bigger plans for this method.

The U.S. State Department takes it seriously (even if CNN puts the word threat in scare quotes).

The outlaw regime in Iran issued a threat today against @FDD, an American think tank, and its CEO. The U.S. takes the regime’s threats seriously. We intend to hold Iran responsible for directly or indirectly compromising the safety of any American.

This is the regime whose foreign minister Emmanuel Macron made an eye-poking point of ushering into the middle of a G7 summit.  In light of Iran’s months of antics prior to Zarif’s arrival in Biarritz, this looks like a reward for bad behavior on an epic scale.

Trump is right to look sour about that.  There is nothing to Macron’s credit here, or that of European governments that support this move.

But if you went by the mainstream media coverage, you’d think “the” issue was Trump being caught off-guard.

Exit point, on a related but separate topic: the G7 continues to thrash over the question of readmitting Russia to make it the G8 again.  We won’t settle the issue in 25 words or less, but two things certainly put the bona fides of the G7 membership in perspective.  One is the tolerance for a stunt that gives radical Iran a stage to strut upon, in the G7’s own purportedly polite company.

The other is that China remains a member of the G7.  In spite of doing things as bad as or worse than Russia’s malfeasance – including occupying and militarizing territory not her own in the South China Sea – Beijing isn’t being targeted for removal from the club.

I’m no friend of Russia’s post-2014 career myself, but let’s not kid ourselves about purity or consistency of motive here.

Caption this
Next Post
CNN guest: Trump ‘may be responsible for many more million deaths’ than Hitler