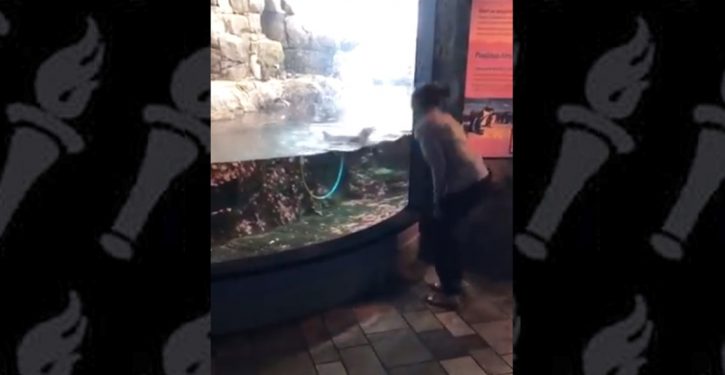 It’s a charming interlude in this little video clip tweeted out by Alexandria Ocasio-Cortez.  There’s a penguin in a tank behind glass, and when AOC runs back and forth in front of it, the penguin swims back and forth to keep up with her.

Tiring of the back-and-forth routine, AOC stops and begins an up-and-down sequence.  The penguin gamely joins her, bobbing above the water and then plunging beneath it several times in succession.

Apparently, enjoying that moment isn’t a priority for some.  You might expect the Twitter comments to have a certain amount of sarcasm in them, about, oh, say, the congresswoman’s attention span, or the relative intelligence levels of the two species involved.  And there’s plenty of that.

But the really striking thing about the comments may be how devoted many are to anticipating a meltdown from the political right.

Someone went to the trouble of creating that fake headline.  Just saying.

The right is gonna get so mad when they see you having fun. No fun allowed after turning 12.

I know you weren't making this to troll some right wing folk, but they really don't like seeing humans acting like humans.

Etc., etc.  There’s a lot of rent-free cranial occupation going on out there.

This reaction does actually prompt the imaginative observer to wonder: What would the Left do if a Republican representative posted a video of her or himself cavorting in front of a penguin swimming in a tank?

It seems unlikely the liberals would simply applaud a Republican for having fun, doesn’t it?  There was at least one sample that seemed relevant:

Meanwhile Dan Crenshaw's team filmed their own version but when he couldn't resist shooting the penguin in the heart 46 times, are still debating whether posting it will be a net positive with his supporters.

Meanwhile, don’t worry.  If your greater concern is the inhumanity of zoos and aquariums, the comments have you covered.

I absolutely love you, but this animal belongs in the wild not in captivity. Zoos and aquariums are very sad places.

A few tweeps did essay little jokes.  Feel free to hold a “caption this” contest.

Wow look! It’s the Penguin and the Joker

Left has its panties in a knot over Trump’s ‘chosen one’ comment: How soon they forget
Next Post
New Mexico police discover dead newborn in trash bag, reportedly injected with heroin