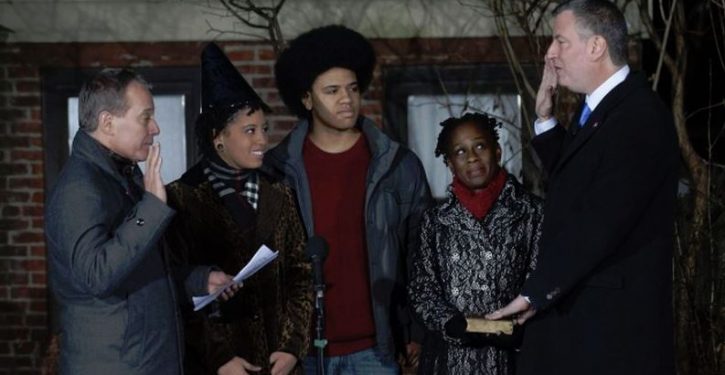 New York City Mayor and presidential hopeful Bill de Blasio should stay away from pizza: It doesn’t agree with him. This became evident shortly after he was sworn in for his first term and was presented with a pizza from a fabled Staten Island pizzeria. He made headlines when he proceeded to eat the pie with a knife and fork.

Now that may be no big deal to you and me, but to native New Yorkers — who swear by folding a slice in half lengthwise (keeps the sauce and cheese in) and eating it with the fingers — it was a sacrilege. The new mayor was branding himself as an outsider to lifelong city residents, a posture he would double down on by tweeting after the 2018 World Series:

Nothing like spending some time with my two great loves: @Chirlane and the @RedSox. Weren't even favorites to win the division, and now they’re the reigning World Champions! pic.twitter.com/PVgxSZ20Ct

For those who don’t follow baseball, the Boston Red Sox and New York Yankees are arch rivals.

But back to de Blasio and pizza. The topic made local news again this week when hizzoner went to bat for a Brooklyn pizza restaurant that had closed, tweeting:

On its face it sounds common enough. A favorite restaurant is forced out of business, and its most ardent fans — which include the mayor — rally around the cause of resurrecting it. So what was the reason Di Fara closed? Did it lose its lease? Was its rent raised to a level so astronomical it could no longer afford to pay?

No. According to Gothamist, the restaurant was seized by the New York State Department of Taxation and Finance after it fell in arrears in its tax payments to the tune of $167,506.75. De Blasio is attempting to muster support for a scofflaw!

In his oath of office, which he has taken twice, de Blasio swore to uphold the laws of New York City and State. He is now violating that oath on a whim.

And he wants to be president?